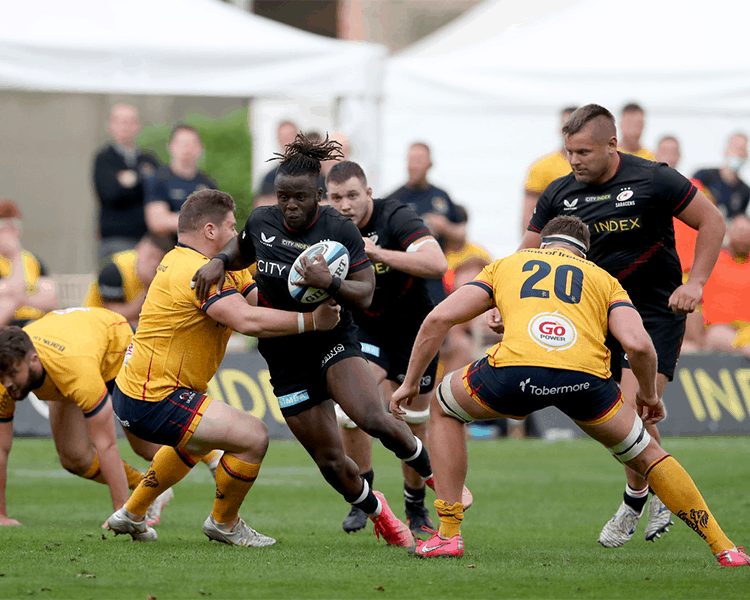 Saracens Men suffered defeat in their final pre-season match before the start of the 2021/22 campaign, as they went down 33-3 to Ulster at HAC in London.

The hosts struggled to get a foothold in the match as ill-discipline allowed the Belfast based side to control the territory, and they scored five tries in a clinical display.

Sarries started in their predictably physical style and were looking to make dents in the Ulster defence, however an early opportunity which looked promising saw them held up over the line after a cagey opening 10 minutes.

The visitors then found their stride and took the lead just before the 15 minute mark as Nick Timoney opened the scoring. Nick Isiekwe was sent to the sin-bin for Sarries after stopping a quick-tap penalty, and Ulster took advantage immediately as they drove towards the line before the number eight crashed over. John Cooney’s conversion gave his side a 7-0 lead.

That lead was extended just five minutes later as Craig Gilroy crossed for their second try in the corner. Another penalty gave them territory, and a switch of play gave the winger space to beat the final man and score. Another touchline conversion made it 14-0 as the first quarter drew to a close.

The Men in Black got themselves on the scoreboard thanks to a penalty from Alex Lozowski with 10 minutes left of the first half. Tom Woolstencroft went within touching distance of scoring but they came back for an earlier infringement, allowing the fly-half to dissect the posts.

Nick Tompkins was then sent to the bin as the hosts struggled to gain the momentum they were after, and that was how the error-strewn first half ended as the visitors went in to the changing rooms with a 14-3 lead.

A number of replacements came on at half time as Sarries looked for a passage back in to the match, however it was Ulster who started stronger and extended their advantage just five minute after the restart.

A dropped high ball allowed the visitors some territory in the 22, and after a relentless spell of attack right on the line they eventually crossed as Angus Curtis stepped over from close range. Cooney was once again on the money from the tee, meaning the Londoners now trailed 21-3.

Gilroy then scored his second of the evening as Ulster looked to pull away from their opponents, in similar fashion to his first a wide pass found him in space on the wing and he was able to dive over in the corner. Yet another conversion extended their lead to 25 points.

Sarries then sprung in to life and Ethan Lewis was inches from getting them back in the match as his powerful carry saw him crash over the line, but he was held up and with the new rules it meant Ulster could clear from their goal-line drop-out.

The visitors then made sure of the result with 15 minutes left as they crossed for try number five. A penalty gave them a lineout just five metres out, and then John Andrew was on hand from just a metre out to give the visiting fans even more to cheer.

Joel Kpoku looked to have given the home supporters a consolation try to celebrate in the closing stages, however in the act of scoring a fumble meant that the Ulster line remained strong.

Mark McCall’s side start their Gallagher Premiership season next Friday night against Bristol, and they will be looking for an improved performance in the curtain raiser at Ashton Gate.