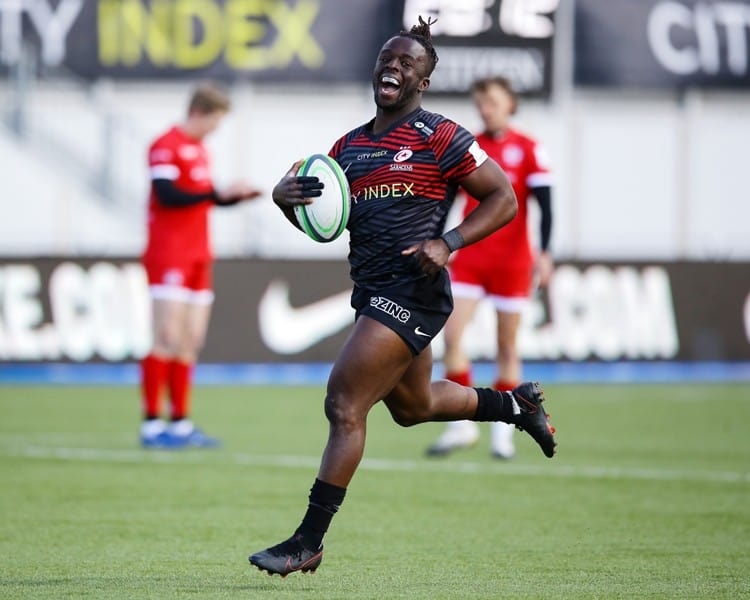 Saracens Men responded emphatically to last weekend’s disappointment with a bonus-point win against Jersey Reds to get their Championship campaign back on track.

Replacement hooker Jack Macfarlane notched a charge down score for the visitors but it was Mark McCall’s side who looked dominant for the majority of the 80 minutes.

Jersey had actually taken the lead in the first minute through a Brendan Cope penalty after Sarries were penalised for obstruction from the kick-off.

The Men In Black responded well though and on 10 minutes took the lead thanks to Lewington’s first, which came about thanks largely to Segun’s aggressive kick chase.

The Reds then lost possession trying to play out of their 22 and Sarries pounced, Aled Davies’ cross-field kick not going to hand but Taylor reacted quickest to put Lewington in.

Jersey laid an early marker at scrum time to earn a penalty a few minutes later and Cope slotted his kick for 7-6, Manu Vunipola having converted Sarries’ opener.

The fly-half was responsible for a brilliant assist just shy of the half-hour as, seemingly with nothing on, he put a perfect chip over the Reds defence for Lewington to gather and score.

Obatoyinbo got in on the act for Sarries’ third score on 31 minutes, Davies taking a quick tap on the Reds 22 after the forwards had earned a scrum penalty and eventually the ball was moved to the full-back in space out wide.

There was time for Sarries to wrap up the try bonus just before the break as again the speed of ball allowed Davies to manipulate the Reds defence and Vunipola put Taylor through with a cute pass.

The fly-half couldn’t convert but a 24-6 lead at half-time was just what the hosts deserved for their intent and physicality in the first 40 minutes.

Obatoyinbo’s second on 47 minutes created even more breathing space, Callum Hunter-Hill making the break before offloading to Juan Pablo Socino, who had the simplest of passes to put the full-back in.

Jersey replied immediately though as Obatoyinbo’s clearance was charged down and Macfarlane jumped on the ball to score under the posts for 31-13.

But from that point on it was all about Sarries, Segun getting a deserved try on the hour as he cut a great line to collect a pass of Davies’ shoulder and burst through the Red defence to score.

And captain Wray wrapped things up five minutes before the end as Dom Morris forced a knock-on in the Jersey 22 before Segun picked the ball up and put Wray in to cap off a much-improved display.