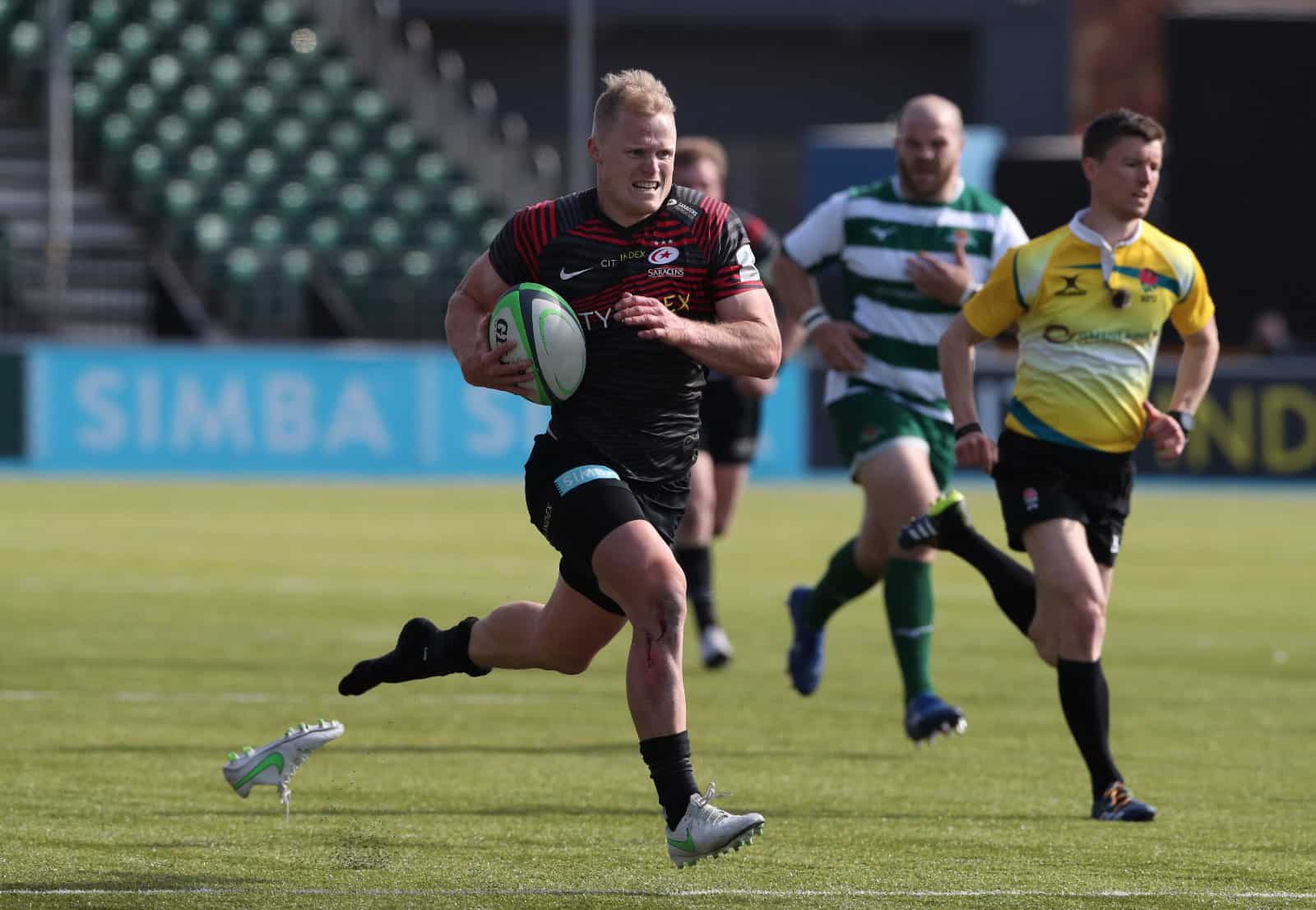 Saracens Men continued their resurgence with an emphatic 48-20 victory over Ealing Trailfinders at StoneX Stadium.

Vincent Koch scored two tries in a Man of the Match display whilst Alex Lewington, Aled Davies and Nick Tompkins also crossed the line as well as 23 points from Owen Farrell’s boot.

The match started in pulsating fashion, and Sarries took the lead with just seven minutes on the clock as Farrell slotted a penalty from straight in front of the posts.

That lead grew on the 10 minute mark as Lewington scored a brilliant try to put the hosts in the ascendancy.

Elliot Daly broke the line and had Jamie George alongside who acrobatically offloaded to Elliott Obatoyinbo, allowing the full-back to draw in the final defender and release Lewington who dotted down in the corner. Farrell’s touchline conversion put his side 10-0 ahead.

Craig Willis then opened the Trailfinders account with two penalties in quick succession, but in between those Farrell had slotted a penalty himself, meaning the men in black had a 13-6 advantage at the end of the first quarter.

Sarries then began to take control, and scored their second try courtesy of Koch as the lead grew once more. A penalty was kicked to the corner and despite the rolling maul being brought down just short, the Springbok was on hand to drive over from close range. Farrell added the extras, giving his team a 14-point cushion.

The Trailfinders enjoyed plenty of possession in the lead up to half time as they looked to get back in to the match, but they were met by a ferocious defence who were being roared on incredibly vocally by the replacements.

That pressure did pay off though with five minutes left of the first half as the Trailfinders were awarded a penalty try due to a rolling maul being brought down as it was powering towards the line, which also saw Jackson Wray sent to the sin-bin.

There was still time for Farrell to slot another penalty with the last play of a breathless opening 40 minutes, as Sarries went down the tunnel with a 23-13 lead at a sun-drenched StoneX Stadium.

McCall’s men started the second half in dominant fashion which was optimised by Maro Itoje’s thumping tackle straight from the restart. Davies then spotted a gap and was almost able to get clear, but from the following phase they were awarded a penalty which Farrell once again kicked straight between the posts.

Another penalty followed for the skipper as Sarries kept playing on the front foot, and this one took the lead up to 29-13 with half an hour remaining.

Koch then crossed for his second of the afternoon to give the hosts an even stronger advantage. A penalty was kicked to the corner and as the maul hammered towards the line the ball spat out, but bounced up kindly for the South African who was able to dive over. The conversion went just wide, but Sarries now had a 34-13 lead.

The bonus-point try came on the hour mark, and it came in sensational style as the Men in Black continued to go through the gears. Farrell took a quick line out to Daly who took play in to the Trailfinders half, and then Koch found Sean Maitland who picked a great line and charged in to the 22. He then drew in the final defender, and Davies had a clear run under the sticks. The conversion then took the hosts over the 40 point mark.

The Trailfinders got a consolation try with five minutes remaining as Guy Thompson bundled over from just a metre out after a penalty was taken quickly, but Sarries would end proceedings on a high as they crossed for their fifth try with the final play of the match.

Andy Christie’s powerful run saw him enter the 22, and he popped the ball up to Tompkins who stumbled over the line to mark his return to the StoneX with a well-deserved try. Farrell added the extras, confirming a highly-impressive 48-20 victory.