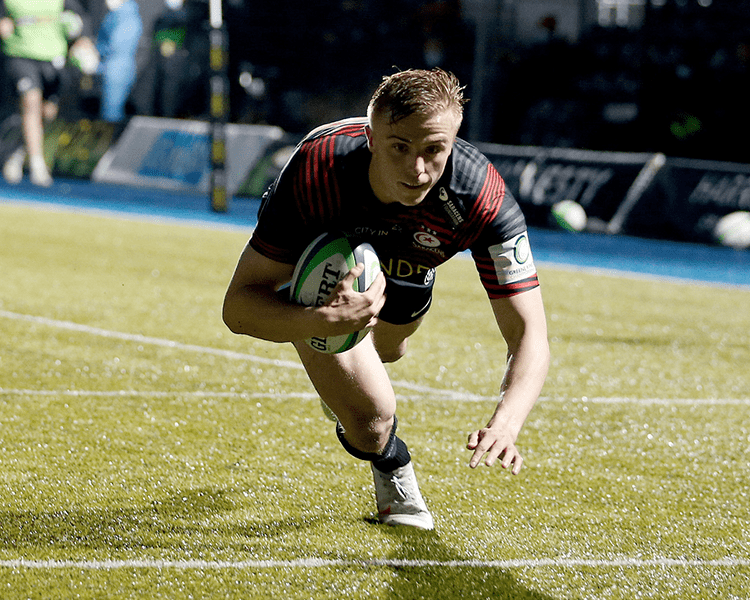 Saracens Men moved in to the top two of the Greene King IPA Championship after a 69-12 victory over Ampthill at StoneX Stadium.

Boosted by the return of supporters, Mark McCall’s side thrived on having their fans behind them and scored 11 tries on a memorable evening in North London.

Nick Tompkins opened the scoring with just four minutes on the clock as Sarries went in search of a fast start. It nearly came almost straight from kick off as Ali Crossdale came within inches of gathering Owen Farrell’s kick ahead but it just trickled out of grasp.

From the next phase however a penalty was kicked to the corner, and after a whole host of backs added their weight Tompkins was there at the base to score. Farrell’s conversion put the hosts 7-0 ahead.

Jamie George then extended the lead four minutes later in almost identical fashion. A penalty gave them a lineout just five metres out, and the England hooker was there to drive over to the delight of the home crowd.

Ampthill then looked for a way back in to the match and had some much needed territory near the line, but after the storm was weathered Tompkins crashed over for his second try of the evening to keep the lead growing.

The Welshman’s huge carry from first phase after a five metre scrum saw him straight under the posts as the opening quarter drew to a close with Saracens leading 21-0.

The visitors then got a deserved try as their pressure turned in to points. With the rain making running rugby a challenge they trusted their maul and kept the ball up front, which gave Syd Blackmore the platform to score their first try of the evening.

Saracens responded took straight away to secure the bonus point courtesy of Sean Maitland. Aled Davies’ sniping run play up to the line, and it was shifted down the short side which allowed the winger to stroll over in the corner. The conversion went just wide, but the hosts now had a 26-7 lead.

Tompkins thought he had completed his hat-trick just before half time as the ball spat out of a ruck and left him in acres of space, but play was called back for an earlier infringement.

There was still time for Maitland to cross for his second with the final play of the half to take the hosts over the 30 point mark. Will Porter was sent to the sin-bin for a late tackle, and they paid the price as a three-man overlap on the right allowed the Scot to dot down once more. Farrell’s conversion put his side 33-7 ahead at the break.

Saracens made the perfect start to the second half as Ali Crossdale scored an outstanding try after just 90 seconds. A penalty advantage saw Farrell opt for the boot, and his cross-field kick was inch-perfect for the winger to gather and sprint to the line.

Elliott Obatoyinbo was next to cross with the hosts starting to flex their muscles significantly. Elliot Daly found space approaching the 22 and fizzed a pass to the full-back who dummied his way to the line in style.

Both sides were landing some huge shots in defence as tempers threatened to boil over on multiple occasions, but despite that, Saracens continued to take their opportunities with Tom Woolstencroft scoring twice in as many minutes.

A penalty was kicked deep in to the 22 on both occasions in almost identical fashion, and the maul powered over from just five metres out with Woolstencroft at the base for both to bring up the half century for the Men in Black.

Ampthill got their second try with just over 10 minutes remaining after another spell in the 22 following some pressure up front. A grubber kick bounced up on the greasy surface which split the defence and allowed Spencer Sutherland cross in the corner.

Sarries saved their best try until the closing stages, with Crossdale’s second a real beauty to savour for those in attendance. Alex Goode, who slotted seamlessly back in to the team made the break, and an acrobatic offload ended up in Crossdale’s hands who scored try number ten.

Dom Morris then rounded off the evening by scoring with the final play of the game to add further gloss to the scoreboard. He saw an opportunity as he entered the 22 at pace, and slid his way to the line to conclude a resounding victory for the Men in Black.