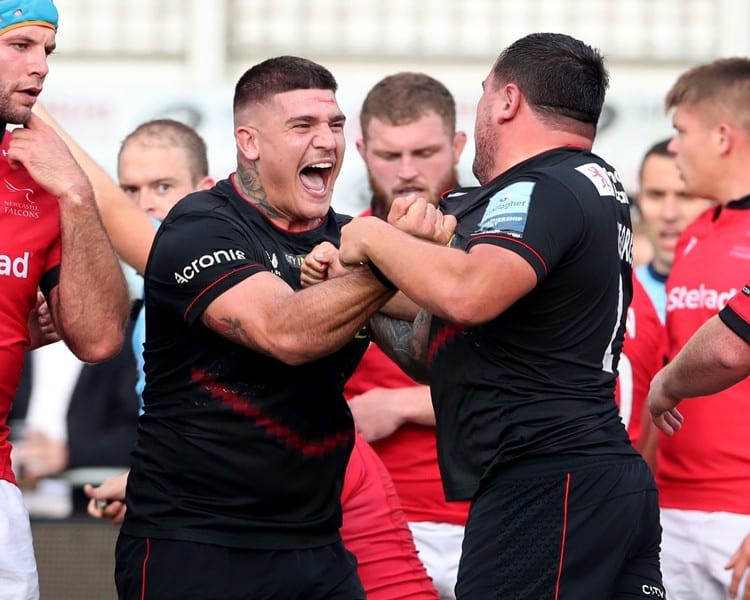 Saracens Men returned to a full capacity StoneX Stadium in the Gallagher Premiership for the first time in 12 months and did so in style as they came from behind to beat Newcastle Falcons 37-23.

Mark McCall’s men trailed by 14 points in the first half but produced a brilliant comeback with scores from Jamie George, Mako Vunipola, Billy Vunipola, a penalty try and 15 points from the boot of Owen Farrell.

Sarries started with plenty of possession and an early chance came their way as Ben Earl found space and charged in to the 22, but he was eventually hauled down and the Falcons line remained intact.

Sean Maitland was then shown a yellow card for a high tackle, but despite being down to 14 men it was the hosts who would open the scoring as Owen Farrell’s 12 minute penalty put his side 3-0 in front.

Newcastle did take advantage of the extra man five minutes later to score the first try of the match. Sustained pressure in the 22 took them right up to the line, and then Mike Brown sneaked in under the sticks in a switched pass which took the defence by surprise. Brett Connon’s conversion gave the visitors a 7-3 lead.

It got better for the Falcons on the 20 minute mark as an opportunistic try extended their advantage. Sarries had the scrum on their own five metre line but the ball was knocked on in contact, and then it was spun straight to Ben Stevenson who stepped the last man and scored in the corner. Connon’s touchline conversion now meant the hosts trailed by 11 points.

Tim Swinson thought he had given Sarries the perfect response as he gathered Max Malins’ audacious offload and slid over from close range, but in the act of scoring he was held up and again the Falcons survived.

Both sides were fighting for territory and in a fiery game tempers were on the edge, which resulted in a penalty for Newcastle following some handbags, and Connon dissected the posts to push their lead up to 17-3.

Sarries then got needed a much way back in to the match just before half time in trademark style. A string of penalties took them up to the line, and then with the rolling maul powering over it was brought down illegally and gave referee Ian Tempest no option but to award a penalty try. George McGuigan was sent to the sin-bin as a result, putting the Men in Black right on the front foot.

The comeback was almost complete with the final play of the half as Maitland found some space, but he was smashed in to touch and an eventual first half drew to a close.

Sarries started the second half as they ended the first, and it took just eight minutes for them to draw level as Jamie George crossed the line. More penalties gave them a five metre lineout, and then the hooker took advantage by tapping quickly in a score that saw him erupt in celebration. Farrell’s quickly taken conversion then drew the sides level at 17-17.

McCall’s side then took the lead to the delight of the home crowd as Mako Vunipola marked his return to the team with a score. Once again the maul gave them the platform, and he broke away to dive over from close range. Farrell once again converted as the lead stood at seven points.

A high tackle on Alex Lewington then allowed Farrell to add another three points from the resulting penalty, and all of a sudden Sarries had a 27-17 advantage.

The hosts were relentless in their attack and they were going from strength to strength, this time Nick Tompkins intercepted and looked to race away but the pace of the Newcastle back three allowed them time to scramble back.

The Falcons then got back to within a converted try as Connon kicked a penalty from 40 metres with just 10 minutes remaining to set up a grandstand finish in North London.

Jamie Blamire then sniffed out an interception as the Falcons looked to get level, but fortunately for the hosts as he looked to claim the pass it went to ground and the referee called for a scrum.

Sarries then crucially edged further ahead as Farrell’s penalty with just four minutes remaining reinstated their 10 point advantage, allowing them to search for the try bonus point in the closing stages.

It was Newcastle who got back in touching distance as Connon kicked another penalty, but then in the final play of the game Billy Vunipola crossed in dramatic fashion to secure the extra point.

As it had all day the maul powered towards the line, and allowed the number eight to bundle over to send StoneX in to raptures. Farrell’s conversion proved to be the last act, to secure a memorable 37-23 win.

Book your tickets for Saracens Men vs Wasps