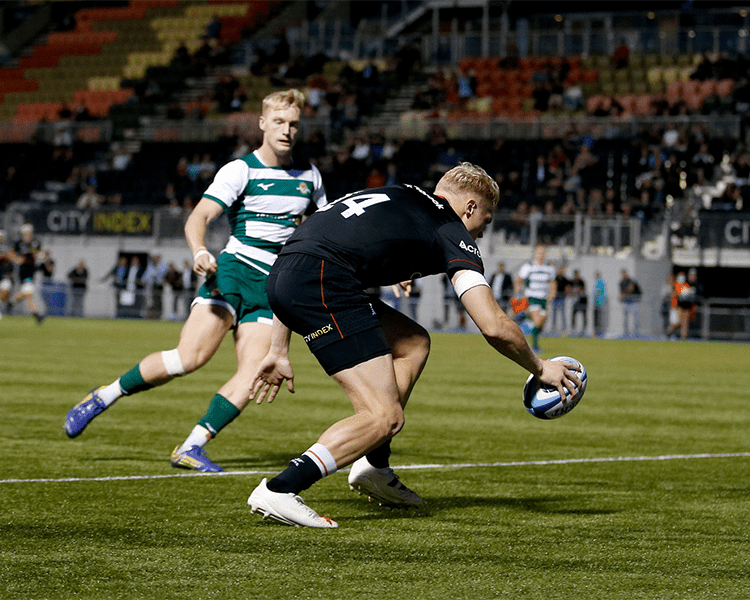 Saracens Storm returned to winning ways in emphatic fashion with a superb 71-21 victory over Ealing Trailfinders at StoneX Stadium.

The Men in Black played brilliant rugby from minute one to 80 and recorded a dominant win, scoring 11 tries in the process in front of their home supporters in North London.

The hosts opened the scoring with eight minutes on the clock as they took an early lead under the floodlights. A counter attack saw Max Malins in space on the short side, and his perfectly executed grubber bounced up for Ben Harris who was able to stroll over the line. Manu Vunipola’s first conversion of the evening took the lead to 7-0.

Elliott Obatoyinbo then broke the line with a delightful step as Sarries threatened to extend their lead, however a last ditch tackle meant the score remained the same.

The first quarter ended with Sarries crossing for their second try as their free-flowing rugby got the reward it deserved. More quick ball at the breakdown was allowing the backs to flex their muscles, and Vunipola put Brandon Jackson straight through a hole and he could race to the line.

The visitors responded straight away however, and closed the deficit with their first try. A penalty was kicked to the corner, and from the maul Tadhg McElroy was able to stretch over under a pile of bodies. Bill Johnston’s conversion meant Sarries’ lead now stood at 14-7.

It didn’t stay like that for long though as Sarries scored try number three straight away. Kapeli Pifeleti carried strongly, and his audacious offload released Josh Hallett who was never going to be stopped from 15 metres out.

In a topsy turvy first half, Ealing then scored almost straight from the restart once again as another powerful maul was awarded a penalty try, but then just before the half hour mark Malins marked his return with a try to the delight of the home crowd.

With sustained pressure in the 22, Joe Simpson fizzed a pass to the wing, and the England international was able to dive over from close range, putting Sarries 26-14 ahead as the game headed towards half time.

Jackson then scored his second and Sarries’ fifth of the night with five minutes left of the opening 40 and it was the try of the night. A break in our own half allowed Hallett to gather, and he drew in the final defender before releasing Jackson who ran away from half way.

In almost identical fashion Ealing then crossed for their third, as another close range penalty let them drive over with McElroy at the base once again. The conversion meant the Sarries lead was now 31-21 with one play left in the first half.

That play was taken advantage of as Joe Simpson dived under the sticks in trademark style from 10 metres out, and the conversion ensured the Men in Black led 38-21 at half time.

The second half started perfectly for Sarries as Harris went over for his second of the night. Another sweeping attack took the ball up to the line, and the ball was spun through the hands to the Olympian who took the lead up to 22 points.

A number of replacements then entered the action, and the hosts managed to keep up their momentum as Andy Christie scored a captain’s try on the hour. Jackson, who was having a brilliant game broke the gain line and had the skipper alongside who could beat the last Manto score. Vunipola’s fifth conversion brought up the half century of points.

Harris then secured his hat trick two minutes later as the game really started to open up. A set play from a lineout saw the ball shifted brilliantly to the winger, and he used his power and strength to bulldoze his way over in the corner.

As the game entered the final 10 minutes Sarries got their 10th try of the night, and this time it was Sam Crean who went over. A lineout in the 22 was taken brilliantly in the air by Theo McFarland, and then as the ball edged closer the prop carried hard and was taken to the line by the attackers in support. Josh Sharp’s conversion meant the lead was now up to 64-21.

Theo Dan then marked his first match in 14 months with a try in surely the most popular try of the evening in the closing stages. Front foot ball had the Ealing defence on the back foot, and the hooker was there to bundle over from five metres out. Sharp’s conversion brought up the 70 point mark.

That was how the match ended as Sarries registered a brilliant win to raise the confidence levels ahead of the Premiership trip to Leicester next Saturday.