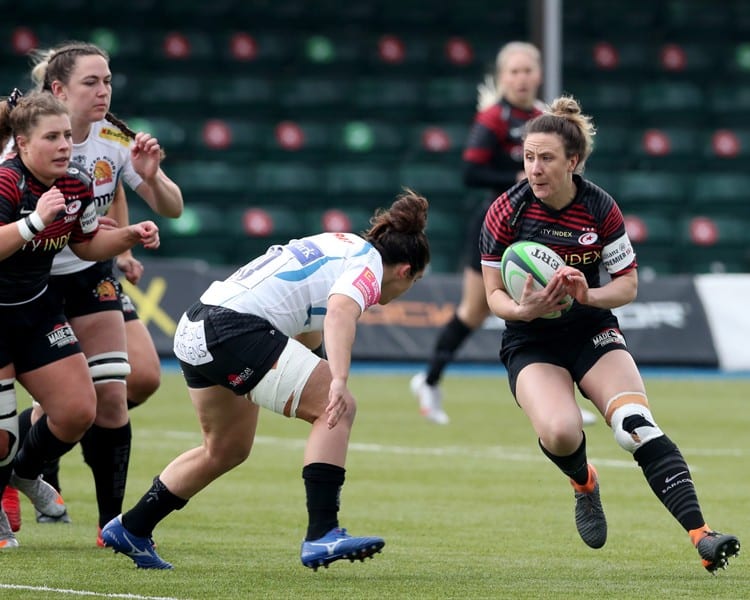 Donna Rose scored in a difficult opening half for Alex Austerberry’s side before Lotte Clapp Vicky Fleetwood and May Campbell completed a heroic comeback after the break.

Rachel Johnson (2) and Sachiko Kato scored Exeter’s first half tries after two yellow cards to May Campbell and Eloise Hayward and crossed the whitewash for Chiefs in the second half.

Zoe Harrison put Sarries ahead with a penalty from in front of the posts after she put her side in the opposition half through excellent tactical kicking.

Moments later, Lotte Clapp burst down the right wing before Rose appeared at the back of a ruck to pick up the ball and score a converted try from a few meters out.

Exeter then had a period of possession which featured numerous line breaks and after a powerful pick from a scum by Linde Van Der Velden, Johnson scored from short range off the back of the resulting ruck.

Her try was converted and things got worse for the Women in Black as both May Campbell and Eloise Hayward were shown yellow cards.

Exeter were on the ascendency and scored after the second yellow was shown as a series of pick and goes resulted in Kato scoring Exeter’s second converted try of the afternoon.

As the clock went red for half-time, Johnson scored her second converted try for Exeter after another impressive series of pick and goes put her in position from two meters out to put Chiefs 21-10 ahead at half time.

As the second half commenced Saracens were back at the races, with Harrison kicking her second penalty of the match.

Clapp then hit a superb line off Harrison’s inside shoulder in the centre of the Chiefs 22 to score with 20 minutes remaining and one point between the two teams.

The tension was growing as Saracens set a driving maul from a penalty kick to the corner, and the comeback was complete as Fleetwood scored from a pick and go after the maul was collapsed.

With six minutes remaining, Campbell scored from the back of a lineout drive to give Sarries some breathing room and to continue her sensational scoring form.

Harrison capped an excellent kicking performance with a mesmerising conversion from the right side of the pitch and Saracens once again showed strength in defence to hold onto the win.