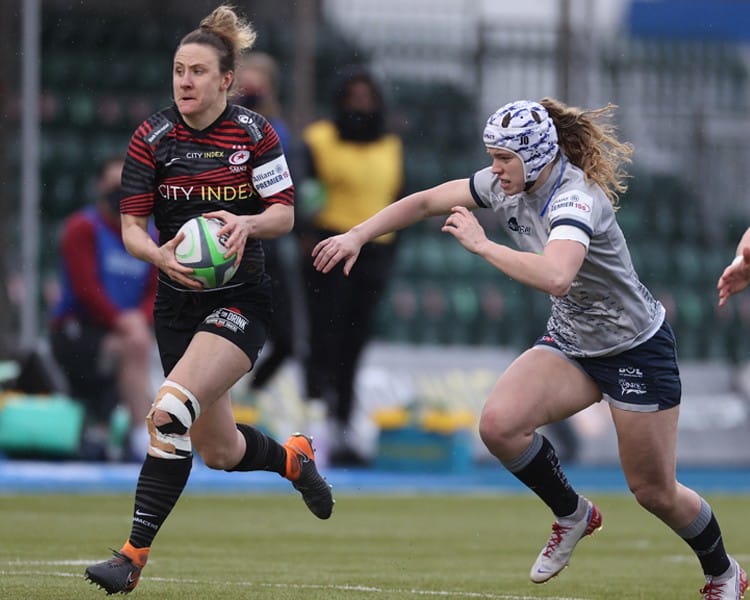 Cleall (3) and Tamara Taylor scored in a convincing first half display before Emma Uren, May Campbell and Mackenzie Carson crossed the whitewash in the second half.

Jess Roberts scored a converted try for Sale and Lauren Delaney touched down after a stunning solo effort but it wasn’t enough to stop Alex Austerberry’s side.

The first few minutes saw Sarries dominate, winning a series of penalties to march into Sale territory before a trademark Cleall pick and go from inside five meters opened the scoring.

Sale recovered from this early set back, opting to kick a penalty through Daley-McLean to reduce the deficit to eleven points after a period of sustained pressure.

However, Sarries won a scrum penalty which Poppy Cleall took quickly, catching Sale off guard to score her second of the match.

Cleall completed a 20 minute hat-trick moments after the first water break as she picked up the ball from five meters out and stormed through three Sale players to score a converted try and put Saracens Women 26-3 ahead.

Sale didn’t give in and kicked another penalty through Daley-McLean.

Then after ripping the ball out of Saracens hands, Sale won a penalty five meters out which Roberts took quickly before finding a gap in the home sides defence to score. The try was converted.

The Women in Black started the second-half with their fifth try of the afternoon following a powerful hand-off from Uren who finished intelligently in the corner.

Their sixth was scored through Campbell, who’s lineout throwing had been outstanding all day, and she was rewarded with another try from a driving maul.

Sale then scored a fantastic try through Delaney who burst down the right wing after catching a Crossfield kick before chipping the ball over the Saracens defensive line and regaining it to score.

Replacement hooker Carson then broke a tackle before stepping the Sale full back to put Saracens back in control with just five minutes remaining to end the game.