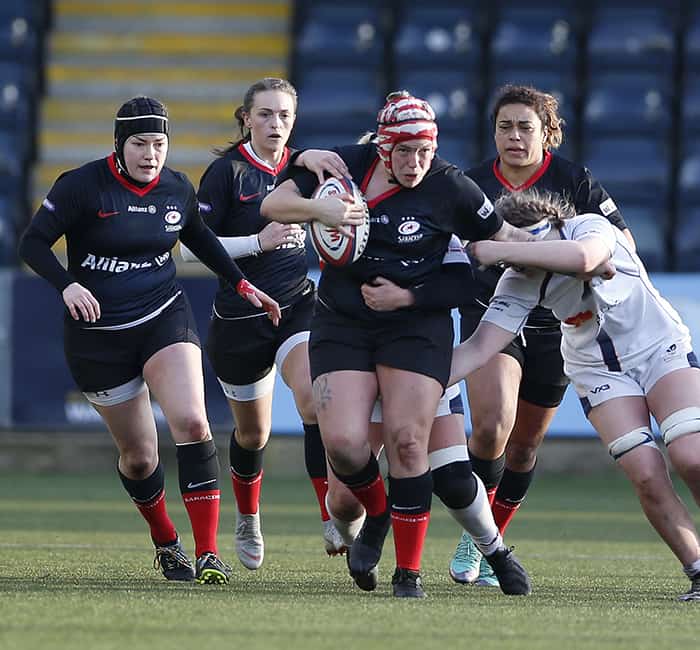 With a long break till the next set of Tyrrells Premier 15s fixtures, both sides opted to play a number of first team players, though the visitors were able to call upon their England and Wales Six Nations stars.

Gloucester-Hartpury made the better start as a scrum in the Saracens 22 gave them field position to setup an attack from which their fullback Mia Venner was able to dart her way over.

The home side responded well though and soon had their first points on the board as Lisa Martin slotted a penalty.

Saracens dominated majority of possession and territory for the rest of the half with the power of the forwards proving hard to handle for the visitors.

From a line-out in the Gloucester-Hartpury 22, the Saracens pack showed their patience close to the line to pick and go for multiple phases before Bryony Cleall powered over.

A second Saracens try followed a few minutes later and it was almost a carbon copy of the first as a driving line-out put the home team on the front foot.

Cleall went over a few phases later as the carrying game of the Saracens pack proved effective close to the line.

Another two points from the tee gave Saracens a 17 – 7 half-time lead.

While the home team had monopolised the ball in that first 40, they found themselves on the back foot for the majority of the second.

Gloucester-Hartpury had multiple possessions inside the Saracens half and 22 but strong defence kept them out for large periods.

Eventually, with a dozen minutes left on the clock, they were able to work the ball wide to the right and some good hands and offloading saw them cross in the corner through Venner to bring the score to 17 – 12.

This setup a breathless final few minutes with both teams going full bore as they looked to secure the game winning score.

Chrissy Siczowa was the one to cross for the home team’s final try as Saracens worked their way close to the line and the backrower showed good determination to finish.

Get your tickets now to watch Saracens Women take on Harlequins Women at The Duel!