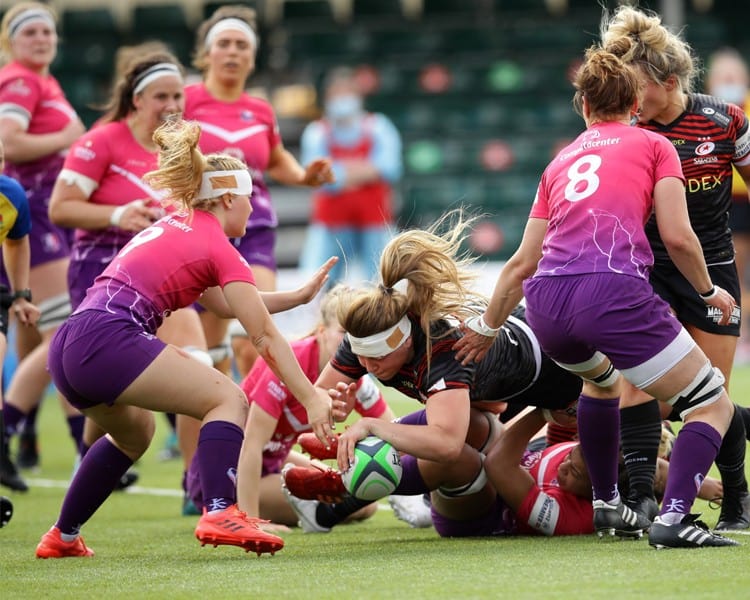 The Cleall sisters scored two tries each as Saracens Women stormed into the Allianz Premier 15s play-off final with a 28-24 win over Loughborough.

Lark Davies (2) and Rhona Lloyd scored for Loughborough whilst Poppy Cleall and Bryony Cleall (2) crossed the whitewash for Sarries in an exciting first half.

Poppy Cleall scored her second try after half time, whilst Loughborough scored from a lineout drive, but outstanding defence for much of the half helped secure the win for Sarries.

The buzz around the StoneX Stadium was palpable as over 1400 fans returned to watch the Women in Black for the first time since 11th January 2020.

Loughborough came out the blocks firing, winning a penalty on the 22 which was kicked to the corner, before Davies scored from the resulting lineout drive.

The try was converted, however, Saracens were straight back on the front foot, and after working their way up to Loughborough’s try line, Cleall powered over to score from close range.

Harrison kicked the conversion and the scores were tied, but Loughborough went back in front after a superb no-look pass in the centres which put Lloyd through, and she showed electric pace to finish under the posts.

Then, after a series of pick and goes, Bryony Cleall got on the scoresheet from within five meters before Harrison kicked another conversion.

Bryony Cleall put Saracens ahead for the first time shortly after, as she took a quick penalty from five meters out before powering through several tackles to score under the posts.

Harrison made it three conversions from three before Loughborough scored a third try of their own through Davies, who once again was at the back of a Lightning lineout drive to score.

Saracens extended their lead after half time through Poppy Cleall, who scored her second after pouncing on a loose ball a few meters from the try line before diving over it to score.

The second half was a far more attritional affair than the first though, and Loughborough struggled to get within striking distance due to an outstanding Saracens defensive display.

Loughborough had an excellent opportunity to score with 19 minutes remaining, but Sophie de Goede got in a good body position to make the turnover and keep Sarries in control.

However, Saracens were shown a yellow card and could not stop Loughborough’s fourth try being scored from another rolling lineout drive.

The try was not converted, but Loughborough came within four points in the final five minutes, however, it was not enough and the ball was smashed into touch as Saracens confirmed their place in the play-off final.