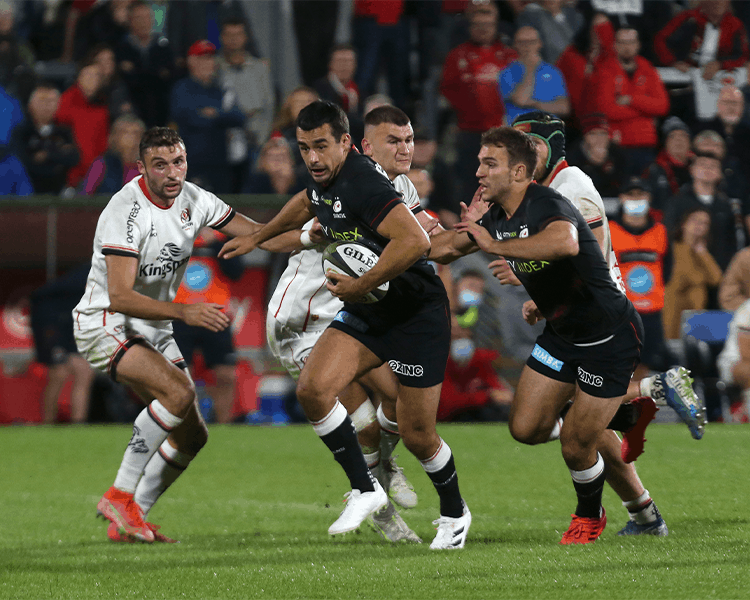 Saracens Men made the ideal start to their pre-season campaign as they registered a hard-fought 45-21 victory over Ulster at the Kingspan Stadium.

In a match that provided plenty of entertainment for the 10,000 in attendance, two quick-fire scoring spells in each half proved to be enough for Mark McCall’s men to leave Belfast with a confidence-boosting win.

Sarries scored seven tries in total, including a late hat-trick for Ben Harris which sealed the win for the Londoners.

The hosts started strongly and opened the scoring with just four minutes on the clock in front of a vibrant crowd. A penalty was kicked to the corner, and despite the rolling maul being pulled down just short Matty Rea was able to stretch over from just a metre out. Ian Madigan’s conversion put his side 7-0 ahead.

Saracens responded immediately with their first meaningful attack, and it ended in a delightful try for Elliott Obatoyinbo. A set move from the lineout allowed Nick Tompkins to make some yards, and then the ball was recycled to Tom Woolstencroft who released the full-back to stroll through from just outside the 22. Alex Goode then added the extras to bring the visitors level.

The Men in Black then took the lead with another try just four minutes later as Nick Tompkins crashed over the line. Ben Earl’s physical carry created space for Rotimi Segun who stepped his way to within a metre of the whitewash after a brilliant individual run, and the ball was then recycled to the Welsh international who could step his way over.

Sarries continued to click in to gear and try number three followed shortly after. A penalty just outside the 22 was kicked to the corner, and then Woolstencroft found himself at the base of the maul to dot down underneath a pile of bodies.

The attack was now firing on all cylinders, and Segun was next to cross the line in a mightily impressive opening quarter. Another penalty gave them the territory, and then from the lineout a wide looping pass from Goode found the winger by the touchline who stepped the final defender to score. The touchline conversion meant Sarries now had a 26-7 lead after an explosive spell.

Ulster then looked for a way back in to the match and almost had their second try as Greg Jones powered towards the line but his inside pass went to ground and the defence held firm.

Aled Davies then thought he’d crossed for try number five before the break as he looked to race clear after Dom Morris’ offload, but in the act of scoring he was held up and the visitors then headed down the tunnel with a 26-7 lead at the break.

Ulster enjoyed the majority of the possession in the opening stages of the second half and created a number of opportunities as they expansively moved the ball about, but they were met by a ferocious defence who stayed resilient.

A Tim Swinson turnover right on his own line was met by huge applause from the bench, and then Sean Maitland scrambled back from the next phase to drag Ben Moxham out in to touch as he dived for the line.

Sarries were then forced to play the remainder of the match with 14 men as Ivan van Zyl was shown a red card for a high tackle, and Ulster capitalised to eventually get over the try-line just before the hour mark.

A string of penalties saw them edging closer, and then Andy Warwick bundled over from close range after sustained pressure to score their second of the match. The conversion then cut the Sarries lead to 12 points.

Both sides then made use of their extensive benches as plenty of substitutes entered the field which slowed the game temporarily, but it was to Ulster’s advantage who then scored again to cut the deficit even further.

Once again a penalty was kicked to the corner, and their trusted rolling maul allowed Bradley Roberts to creep over from close range. Madigan’s touchline conversion meant that the Saracens advantage was just 26-21 as the match entered the final 15 minutes.

Ben Harris then scored the crucial try, and the first in a dramatic hat-trick just when his side needed it most to give McCall’s men some breathing space. Charlie Watson’s electric break in the midfield saw him enter the 22, and with Alex Lozowksi alongside him he released Harris who sprinted clear in the corner. The conversion went narrowly wide, but the lead was now up to 10 points.

The Olympian then put the game to bed with his second try as Lozowski spotted him in space on the wing and he rose highest to gather it, before completing his hat-trick as he pounced on a loose pass to stroll under the posts.

Manu Vunipola’s conversion confirmed the victory, as Sarries ended the match in deadly fashion to seal the win.