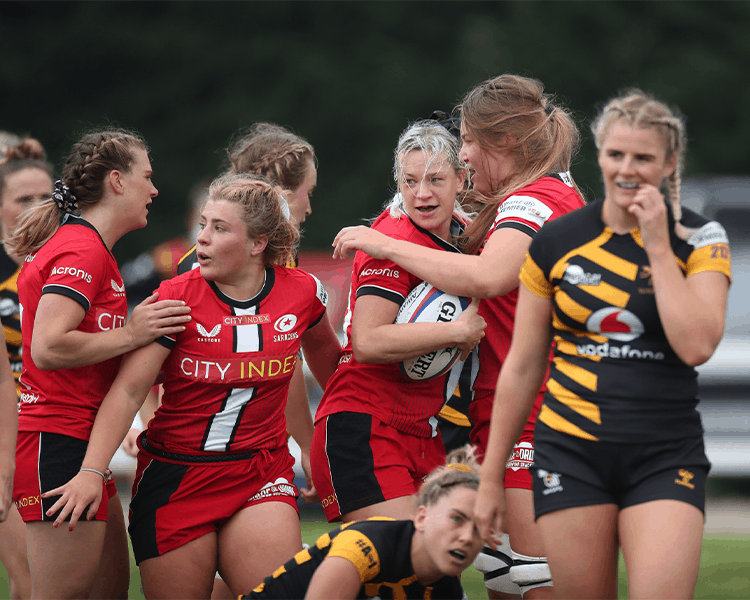 Saracens Women held their nerve to claim all five points in their Premier 15s opener after a thrilling game against London rivals Wasps.

The game ebbed and flowed throughout with both sides dominating for sustained periods, offering those in attendance a fantastic spectacle as the season got off to a flyer. Ultimately Saracens proved more clinical in the pivotal moments, providing Alex Austerberry with plenty of reasons to be cheerful.

The home side started strongly with winger Ellie Boatman breaking down the right-hand side. Only the combined efforts of Lotte Clapp and Sarah McKenna were enough to foil the hosts.

Saracens grew into the tie and came close to opening the scoring following a rolling maul from a lineout deep inside Wasps half. They were denied on one occasion but Wasps were only granted a brief reprieve until Hannah Casey scored the first try of the new season.

From an attacking scrum Poppy Cleall popped to the onrushing Clapp, whose ball inside to Marlie Packer allowed the forward to break the Wasps defensive line. She was supported brilliantly by Casey who was on hand to stretch over from short distance. Harrison’s conversion struck the upright, and the score remained 5-0.

No sooner after taking the lead were Saracens pulled back. This time Wasps attacked with force down the left side, with Boatman getting the better of the Saracens defence on this occasion. The conversion from Flo Williams was successful and the hosts led 7-5. Wasps then added another three points, before McKenna was shown a yellow card for a deliberate knock-on. The visitors did well, however, to contain their hosts a player light and Wasps took a 10-5 lead into the interval.

Saracens started relentlessly after the break, with Clapp diving over in the corner within the opening minute. Harrison added the extras to nudge Saracens in front. Sarries continued to lay siege to the Wasps line and were rewarded after an hour when May Campbell powered over from short distance, much to the joy of the travelling away fans. The conversion from Harrison pushed Saracens to a 19-10 lead.

Wasps responded quickly as they did in the first half and Abi Burton scored from the back of a driving maul. Substitute Hannah Edwards converted to reduce the lead to just 2 points. Wasps then seized the momentum in front of a rejuvenated home crowd as Edwards added a penalty to make it 20-19 with just 10 minutes left on the clock.

Saracens found a new gear as Wasps laboured in the final stages with Packer adding to her earlier assist with an up front try. Harrison held her nerve from tee to ensure that only a converted try would deny Saracens victory in the closing stages.

The game seemed to be dead in the final minute when Wasps had the put in at the scrum just five metres from their own line. But a succession of penalties granted them one final shot at victory. The bounce of the ball proved kind to Saracens as an attempted kick for touch struck the corner flag which meant the game was dead, and the victory was Saracens’.

A fantastic game of rugby with both sides deservedly earning a bonus point. More importantly it was a winning start for Austerberry who will now look forward to a trip North to Durham next weekend.