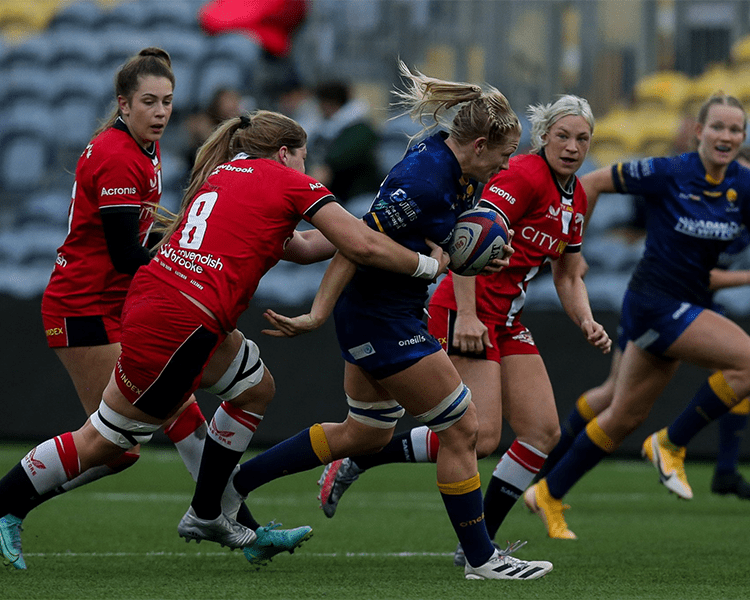 Saracens Women continued their fine start to the season with a resounding 34-5 victory over Worcester Warriors.

Alex Austerberry’s team looked dangerous throughout and scored five tries in total to overcome a spirited Worcester side in tough conditions at Sixways.

Worcester came out of the blocks fastest, buoyed by a strong home support. They had the chance to put Sarries under early pressure but a kick to touch from a scrum penalty missed the touchline and instead crossed the dead ball line.

The momentum shifted after a huge hit in midfield from Georgia Evans. The second row anticipated play brilliantly to smother the Worcester player, forcing a knock on. Marlie Packer picked up the pieces and offloaded to Lotte Clapp who zoomed away from those in close attendance to score in the corner with just seven minutes on the clock.

The try seemed to deflate the hosts and from there they found the going increasingly difficult. Defending inside their own 22, they conceded a penalty at the scrum which Zoe Harrison duly kicked home to make it 8-0.

Two more tries followed in quick succession as the Women in Black put their hosts to the sword.

First Ella Wyrwas broke from inside her own half, finding the narrowest of gaps at the side of the ruck. Such was the speed with which she pierced through the defensive line her teammates couldn’t catch her so she cleverly kicked the ball to just shy of the Worcester try line. Support did arrive to pin Worcester deep inside their own 22 and a mistake followed, allowing Rachel Laqeretabua to touch down out wide.

Just five minutes later Saracens had their third. Sarah McKenna tested the Worcester full-back with a high ‘up and under’ kick. With the Saracens defence in pursuit the ball was spilled allowing Zoe Harrison to pick up the loose ball and run in from ten metres out. She added the extras to take the score to 20-0 with just 24 minutes played.

More Sarries pressure followed before the interval. Alex Callander received a yellow card for the hosts for pulling back a chasing Saracen after a clearance kick was charged down. But no further points materialised and it remained 20-0 at the break.

Hannah Botterman made her first appearance of the season when she came on at half time; the prop is sure to provide a huge boost to the Saracens pack in the coming weeks.

She and the rest of the forwards helped Saracens play more front foot rugby after the restart. Hannah Casey was one of the players to be denied by last ditch defending as Sarries went in search of their fourth.

The bonus point try did come just inside the hour when Poppy Cleall powered over from short range. Harrison’s boot then stretched the lead to 27-0.

The hosts rallied, determined to register themselves on the scoresheet. From kick-off they forced Sarries back and were ultimately rewarded with an upfront try. Despite losing the clean sheet in the last quarter, Sarries can take heart from the fact that they’ve conceded just a single try in each of their last three outings.

Spurred on by the crowed Worcester went in search of a second score, but it was Sarries who had the last say in this affair. A well-executed driving maul culminated in substitute Kat Evans dotting over. Harrison added the extras to take the final score to 34-5.

Next up it’s a return to the StoneX Stadium for the undefeated Sarries, as they take on Exeter Chiefs in what promises to be a thrilling encounter.