“We had a good half-time talk, said what we wanted to do and we went out and did it in the second half”

Saracens went 24 – 0 down inside the opening 25 minutes as the home started an absolute canter. However a Marlie Packer try, converted by Lisa Martin, just before half-time gave Saracens a foothold in the game.

Two mores tries to Packer and further tries from May Campbell and Rocky Clark, with three conversions by Lisa Martin put the visitors into a 33 – 27 lead with five to go, Emily Scott having added three points for Harlequins in the second half.

Saracens were then able to hold up Harlequins on the line with time gone, ensuring they would return to Allianz Park with the win.

The home team made the perfect start to the game as they took advantage of Saracens errors and indiscipline to go over inside the opening minutes through Shaunagh Brown.

A second try followed just a few minutes later as the Quins pack earned a penalty at the maul and with the advantage Scott put a grubber in behind the defence for Rachael Burford to gather and dive over.

Saracens struggled to hold onto the ball and were getting penalized in defence at almost every occasion. That eventually told as Poppy Cleall got sent to the sin bin and Harlequins took full advantage.

Anna Caplice got the home team’s third as she went over in the corner following a number of big carries before Chloe Rollie secured the try bonus point through an outstanding individual effort from halfway.

Two successful conversions from Scott meant Harlequins had built up a considerable lead early in the first 40.

However, with five minutes to go, Saracens finally managed to get a bit of ball in hand and made it count.

A big carry from Mackenzie Carson from the visitor’s 22 took Saracens into their half before back to back penalties gave them a foothold in the Harlequins’ 22. The carrying of Saracens told with Marlie Packer going over.

The first score in the second half would be key and it was Saracens that got it. Clark bundling over after Saracens had again upped the pace in the Harlequins 22 with a quick tap.

The home team managed to get the next score on the board as they forced a penalty after a long period of possession. However, they opted for the three which was duly slotted by Scott.

Saracens made it a six point game with 20 to go as Packer got her second. The visitors upped the intensity and the home team had no answer as the backrower went over with a bit of support from her teammates.

The fourth try, and the lead, came with just under ten minutes to go as May Campbell burrowed her over the line. Saracens’ position had come off the back of some great handling from the pack to put Lotte Clapp free down the wing.

Harlequins managed to stop the attack but were penalised and went down to 14 as a result. With the position the visitors pack went to the scrum and Campbell took advantage after some big carries from her fellow forwards.

Martin’s fourth conversion put Saracens in the lead for the first time.

A fifth try followed not long after and it was the pick of the bunch. Saracens opted to keep ball in hand and worked their way up to halfway.

Carson then received the ball in midfield and went through the Harlequins defence before offloading to Clapp. The captain took the ball on and managed to offload it back to Carson who in turn gave the ball to Packer for her third try of the match.

However, there was still time for another sting in the tail. Saracens were caught offside at the kick-off which gave Harlequins a chance for one final attack.

Saracens did well to hold them out, but repeated penalties eventually led to a yellow card for Clark, meaning the visitors would finish the game with 14.

Harlequins went to their power game once again but Saracens managed to hold them up over the line, and with time in the red the ref called full-time and sparked scenes of jubilation for Saracens players, staff and fans alike. 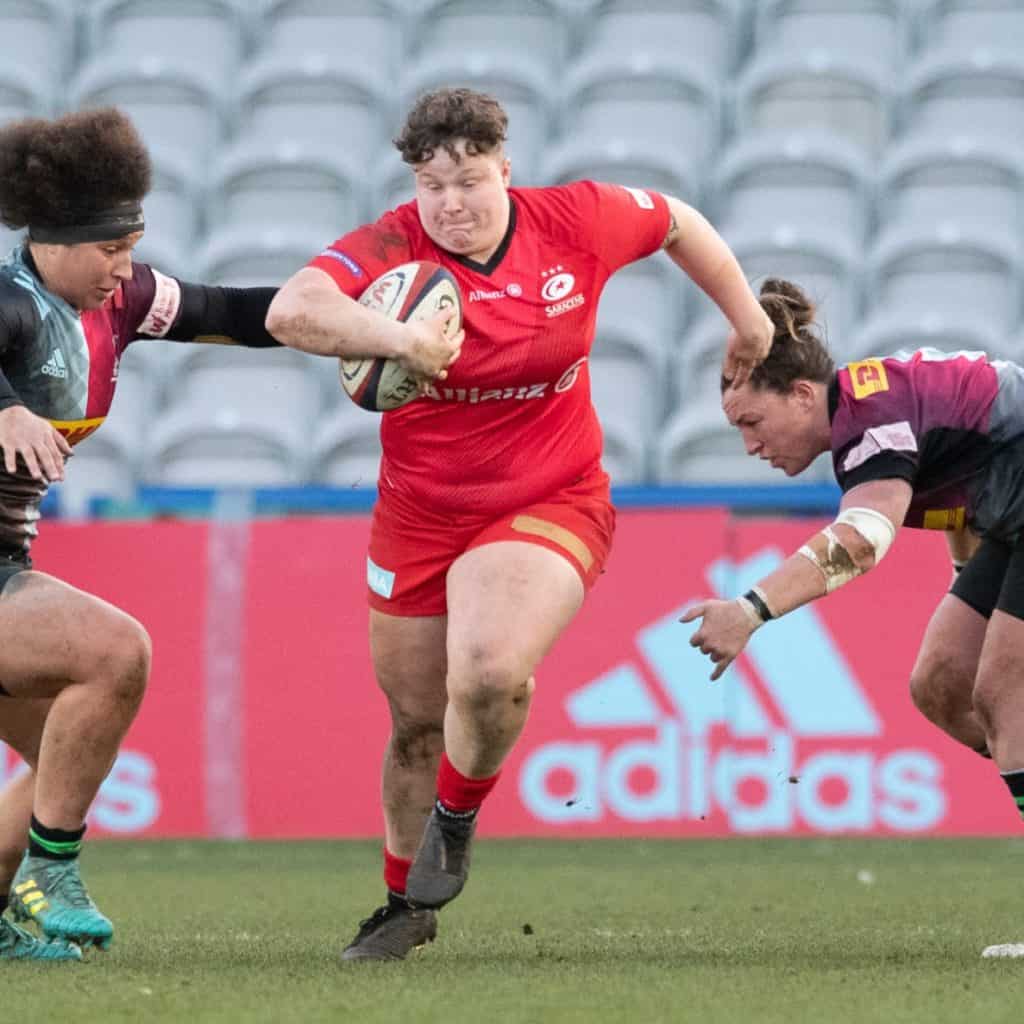 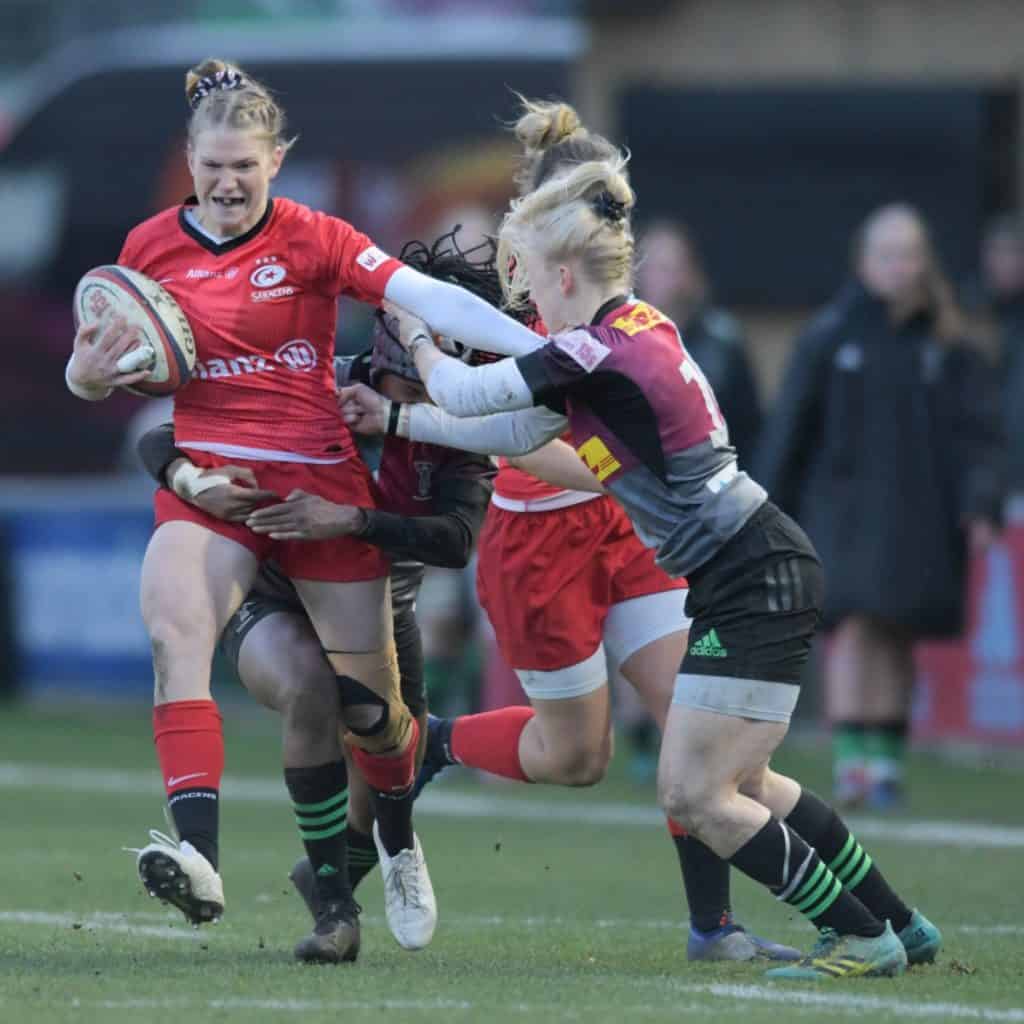 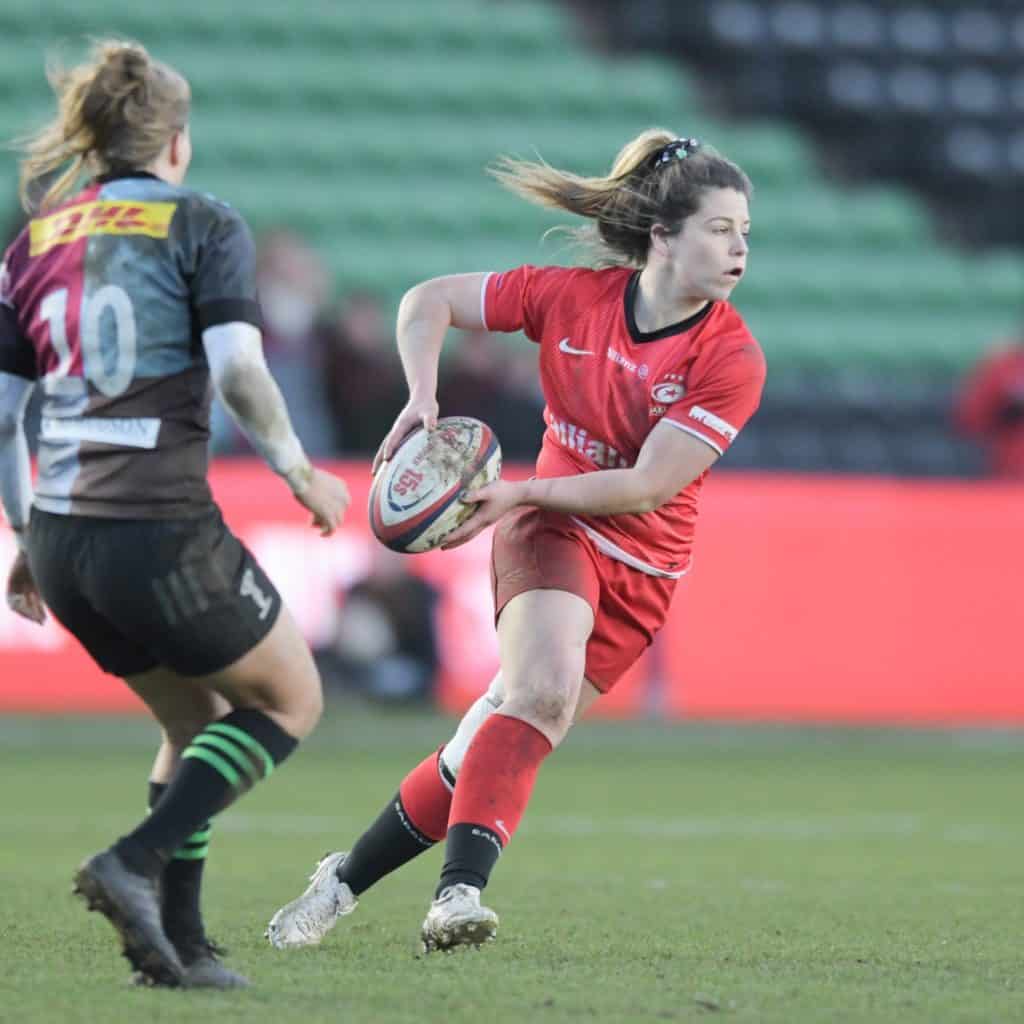 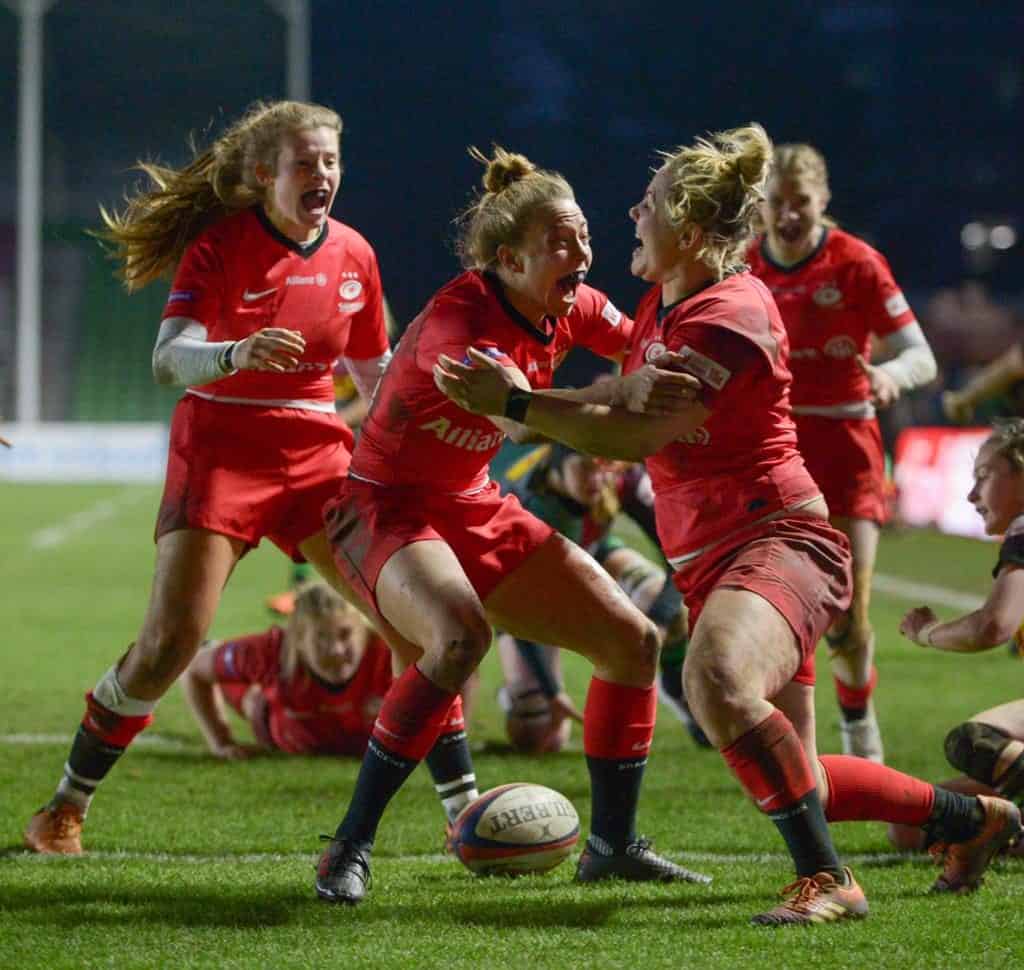 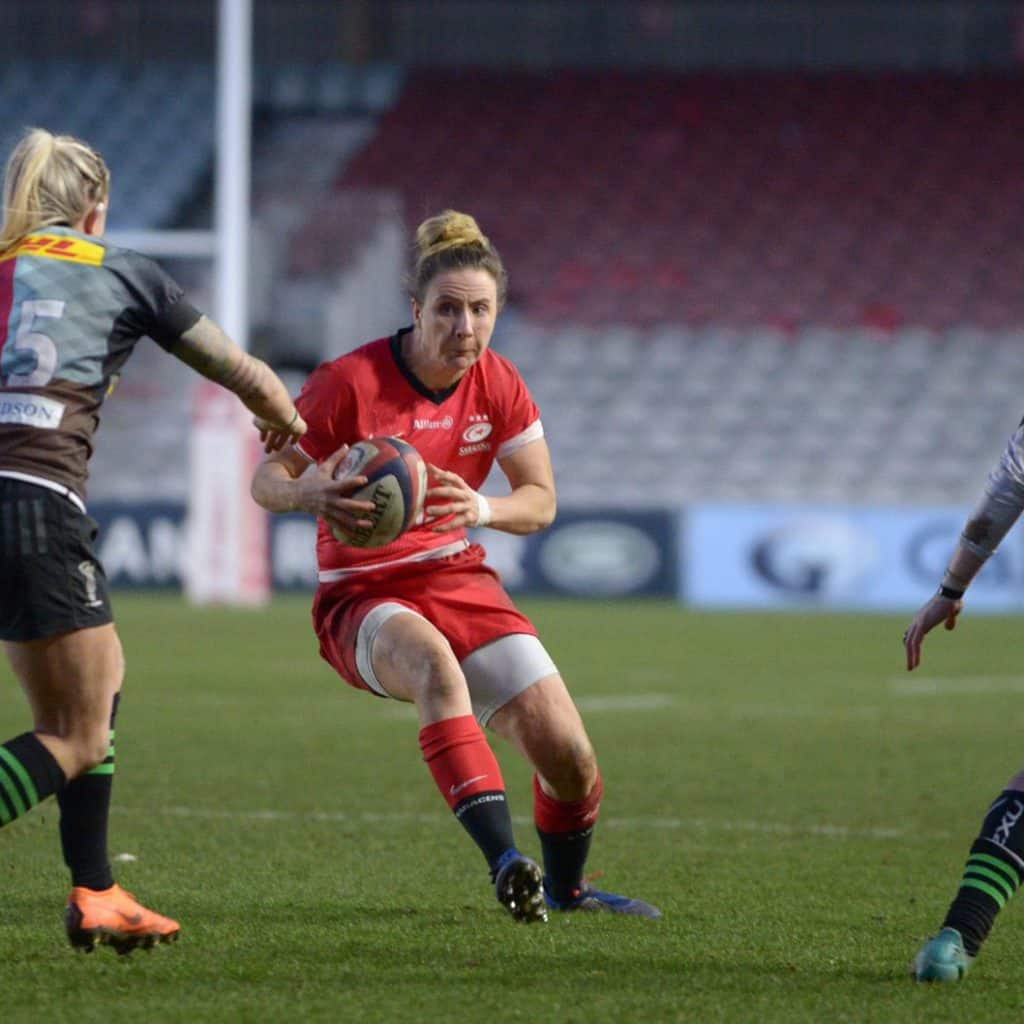 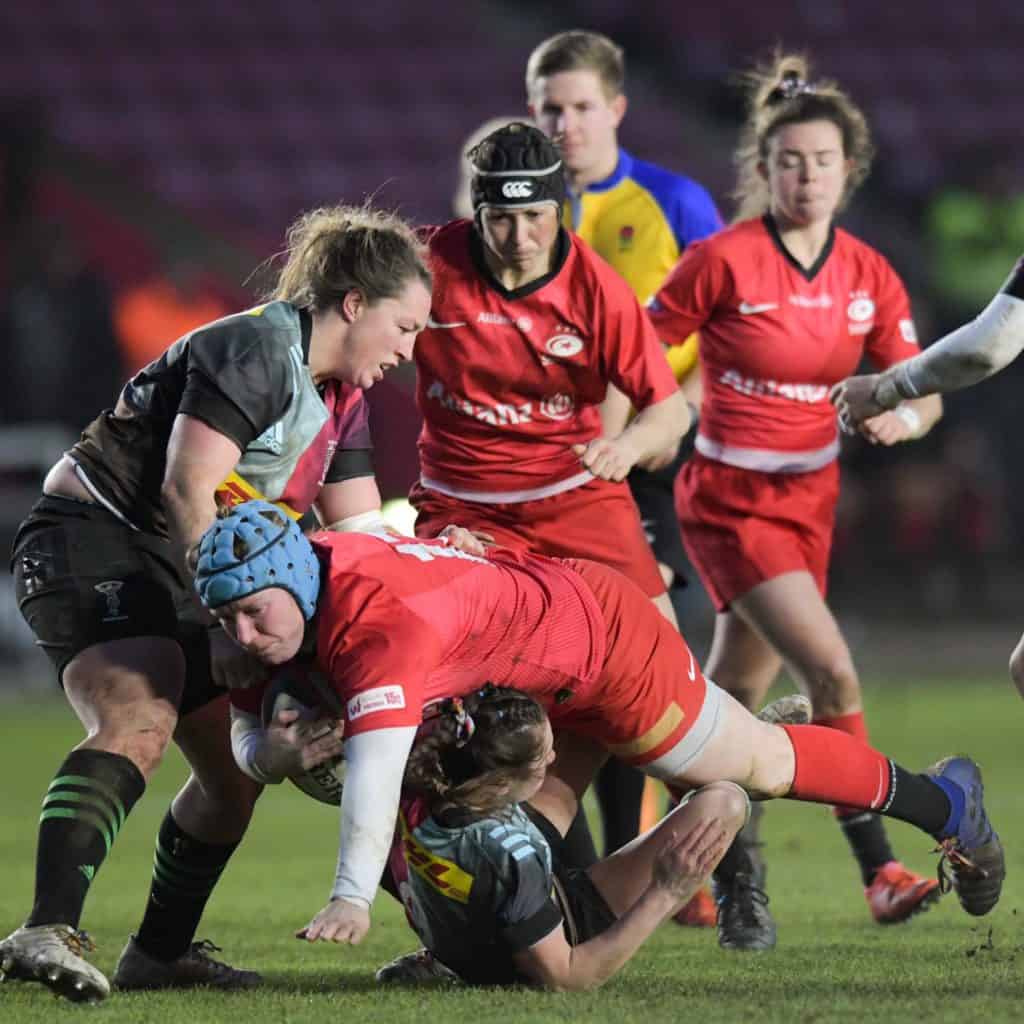 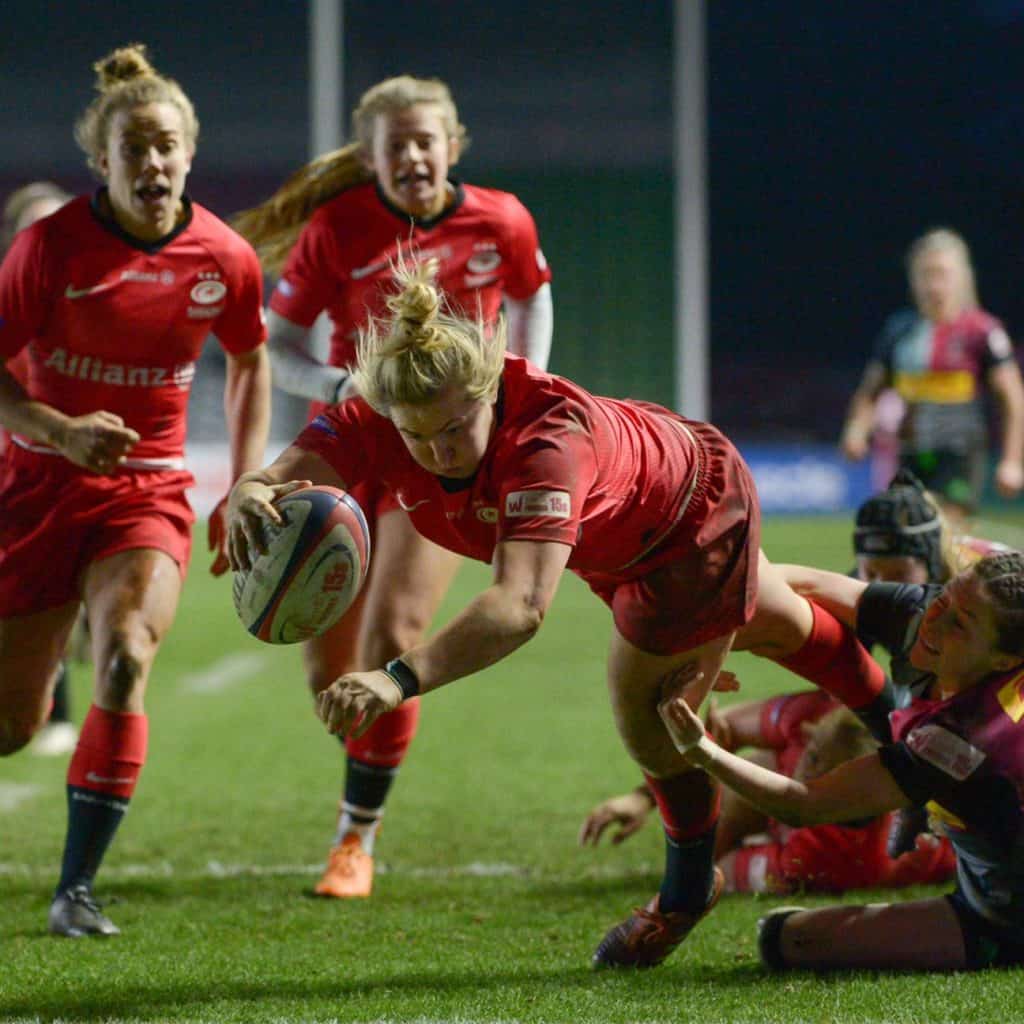