“What we can’t fault is the effort and togetherness this young team showed.” – Brad Barritt

Peter O’Mahony’s first-half converted try clinched victory for the Munstermen, which was sandwiched by a penalty apiece from JJ Harahan and Ben Spencer for a 10-3 scoreline.

The second half was a dogged affair with both sides cancelling each other out but the match was a tense yet enjoyable one and sets up the reverse fixture at Allianz Park nicely.

It was a bright start from Saracens whose match day squad contained 16 Academy products. One of them in Manu Vunipola showed intelligence early on to put Munster on the back foot with a superb boot in behind and the Wolfpack’s relentless press turned the ball over deep into home territory.

Will Skelton and Maro Itoje made serious dents in the province’s defensive set with their teammates winning collisions galore at the breakdown and but for a fine bit of mopping up by full-back Mike Haley, Alex Lewington may have snuck in the corner off Alex Lozowski’s cute grubber.

Ball in hand, Munster were a danger too. Keith Earls and Andrew Conway caused issue on both wings and Saracens needed to be on their A Game on the gain-line to prevent any score.

They did get on the board through a Harahan penalty in front of the sticks which could have been more. Earls’ chip and chase put the visitors under immense pressure and when Matt Gallagher was hounded by several red shirts, referee Romain Poite raised his arm in the Irish side’s favour.

First denying a shot at the sticks, Harahan clipped over three points from a short distance following another Sarries infringement and the away outfit’s response was positive, reclaiming possession from the kick-off and making immediate in-roads into the hosts’ 22.

Munster thought they had the game’s opening try when Rory Scannell trotted home only for play to be called back for a knock-on. Ben Spencer almost had a run in for himself but couldn’t quite grasp the ball after a terrific carry from Gallagher who beat Earls and Stander with nifty footwork and pace seeing him make up 30 metres.

Tested regularly in defence in the first period, the Men in Black were finally broken in the 31stminute. Ireland international Earls skipped on the outside and when he was stopped just short, Conor Murray’s flat pass defeated two Sarries and O’Mahony brushed the try line on the stretch.

Again Saracens rallied and hurried upfield; this time Spencer having an opportunity from the tee. His strike against the swirling wind and hammering rain looked destined to dissect the posts, however a last-gasp gust saw it pound the woodwork.

The Saracens scrum-half struck the post again with an attempt early in the second period and the conditions continued to worsen forcing handling errors aplenty.

It was a real arm-wrestle between the two XVs with most of the action fairly central on the sodden Irish lawn.

At the death, Sarries had one last chance to complete a comeback and earn a draw after Munster were reduced to 14 men.

Arno Botha led with his forearm into Nick Tompkins’ face and received his marching orders and with tongues wagging eager to end on a high metres from the line, Munster managed to spoil Sarries ball and clear into the stand to end an enthralling contest. 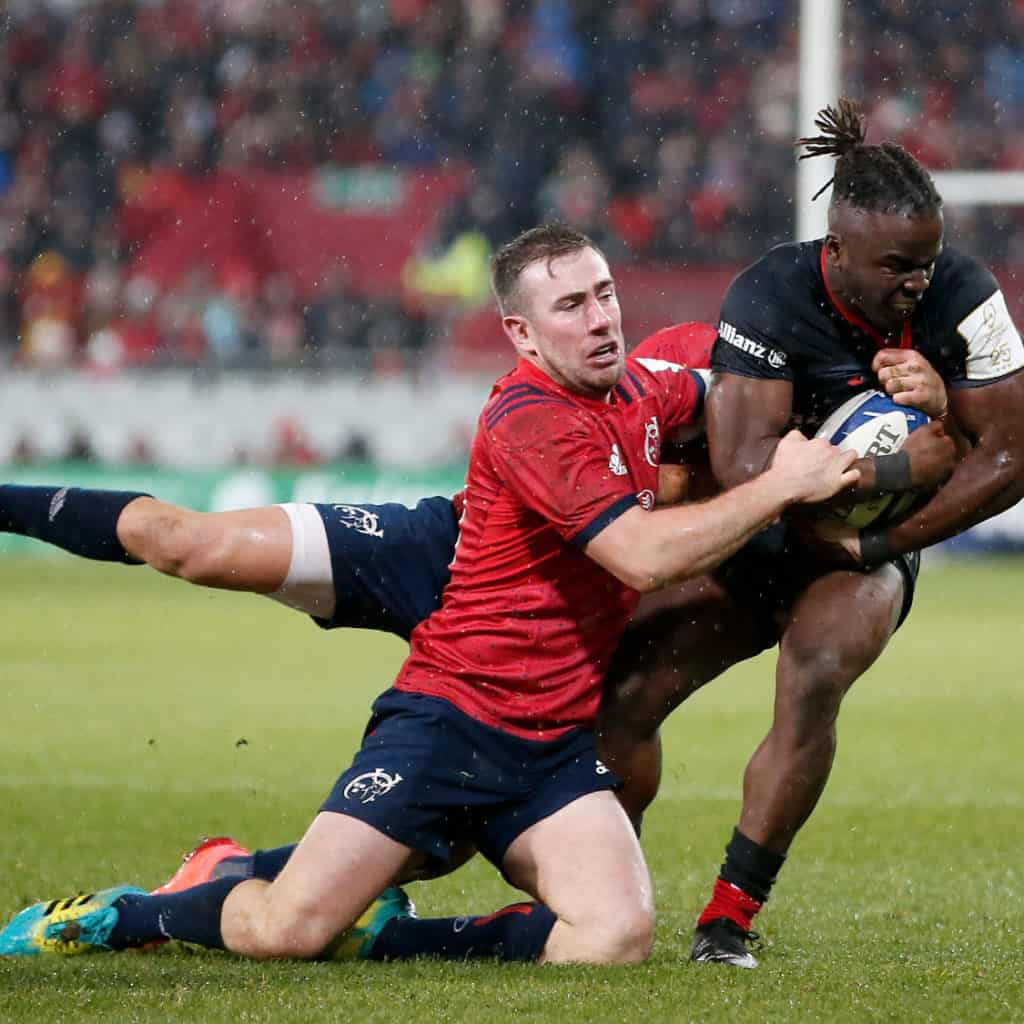 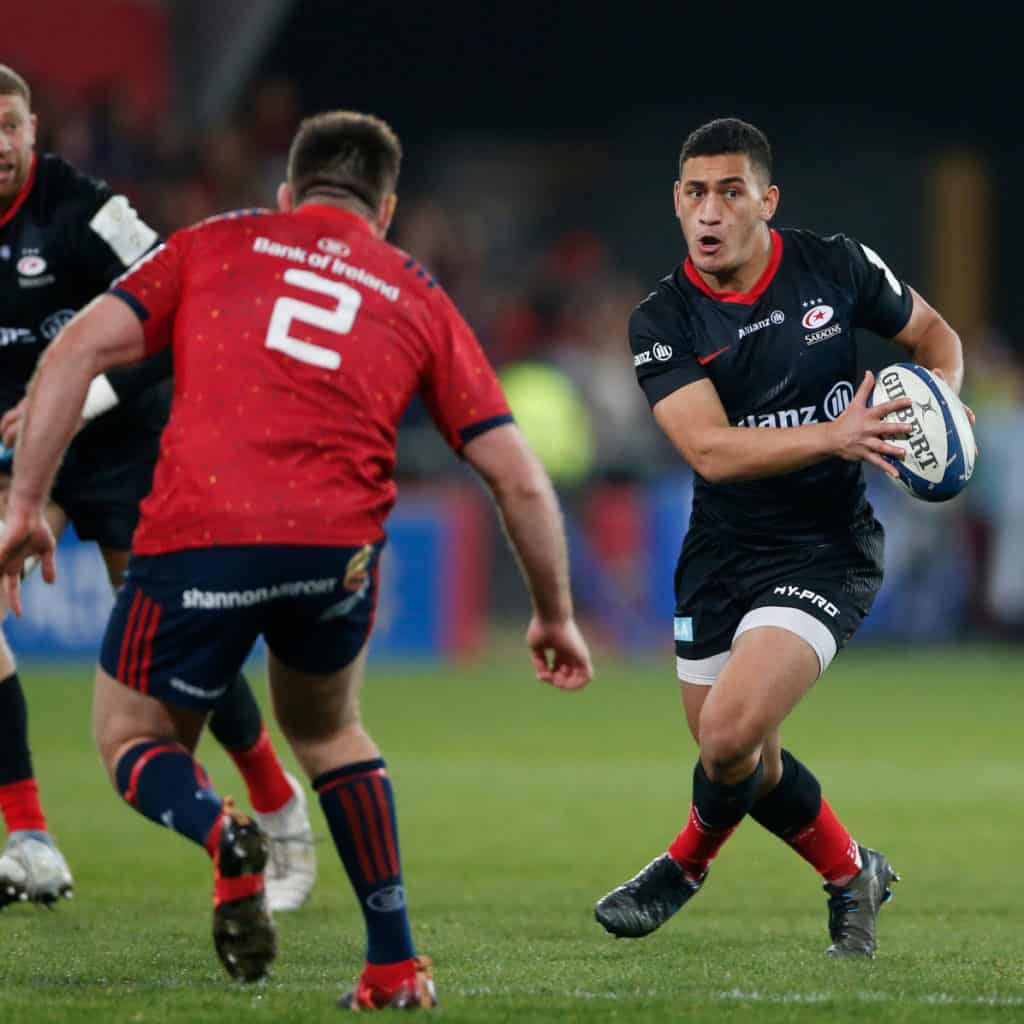 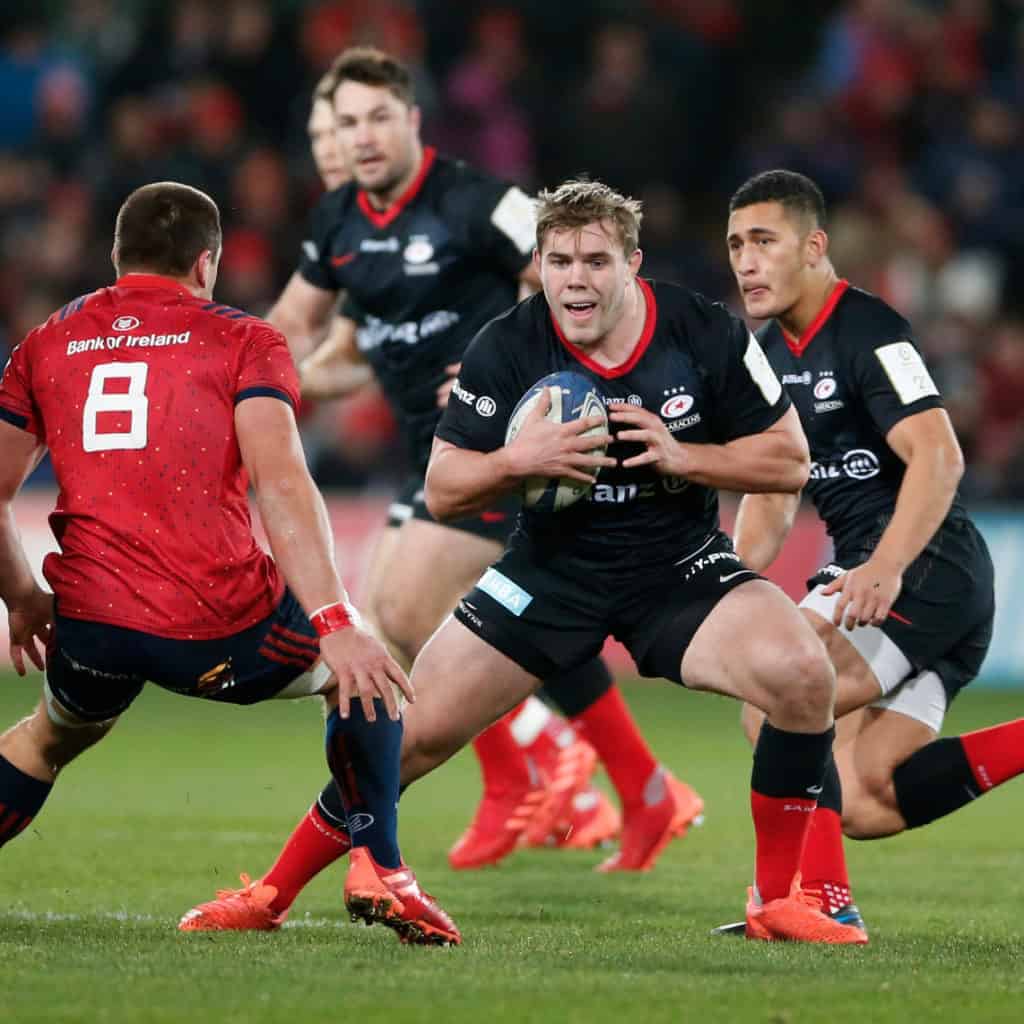 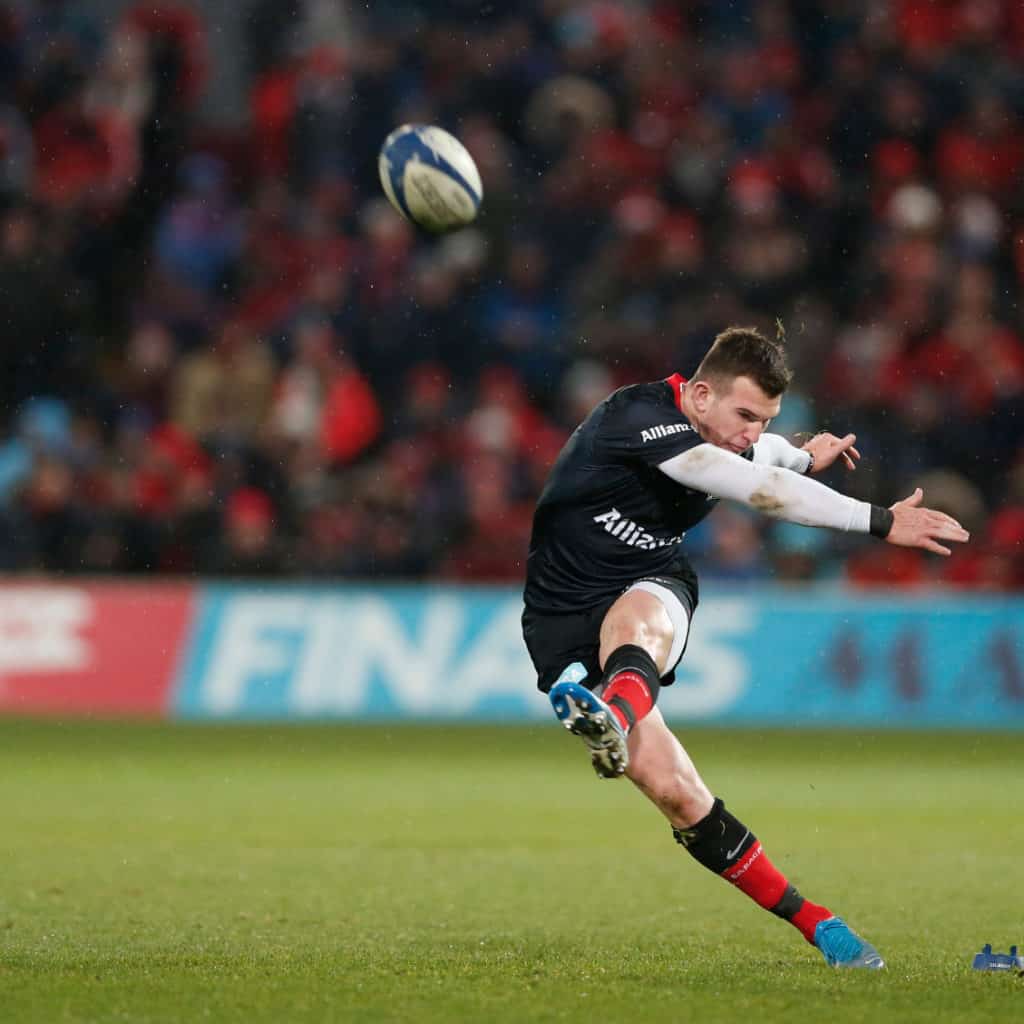 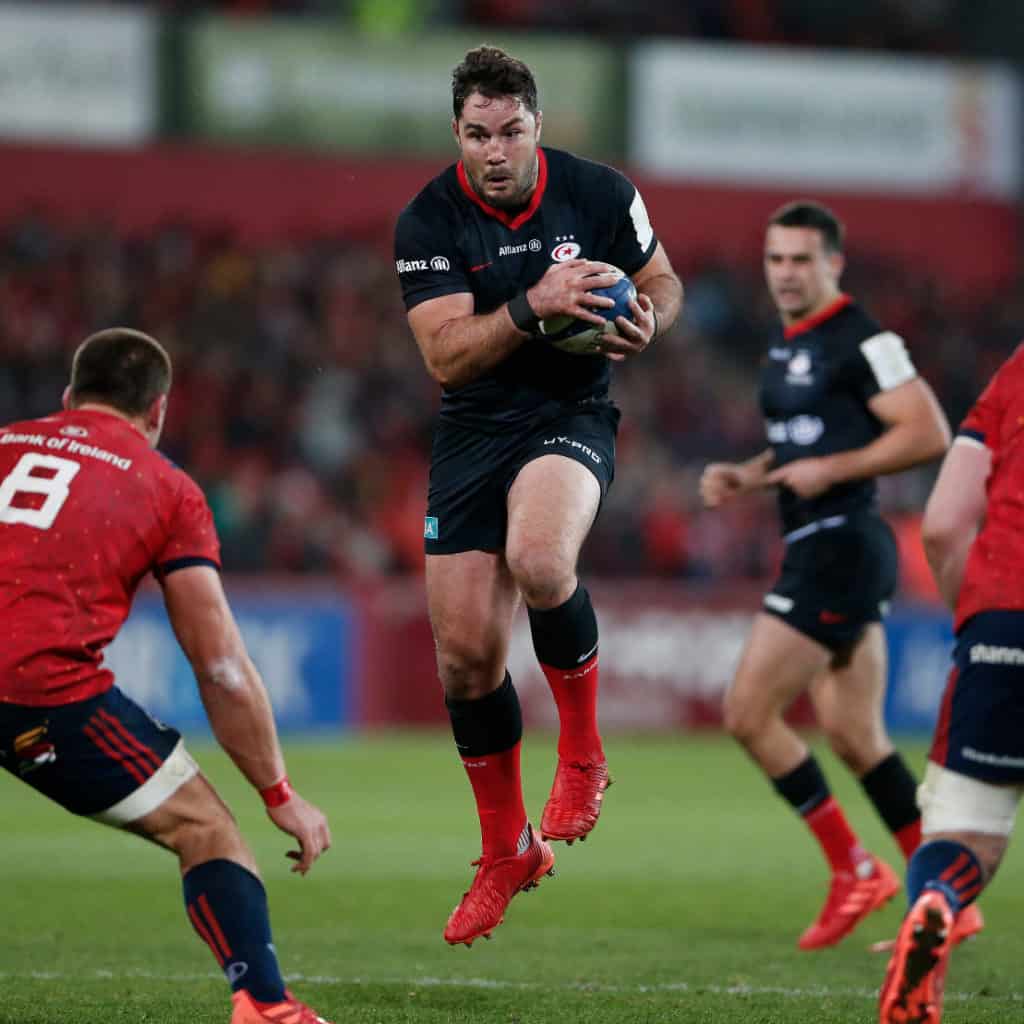 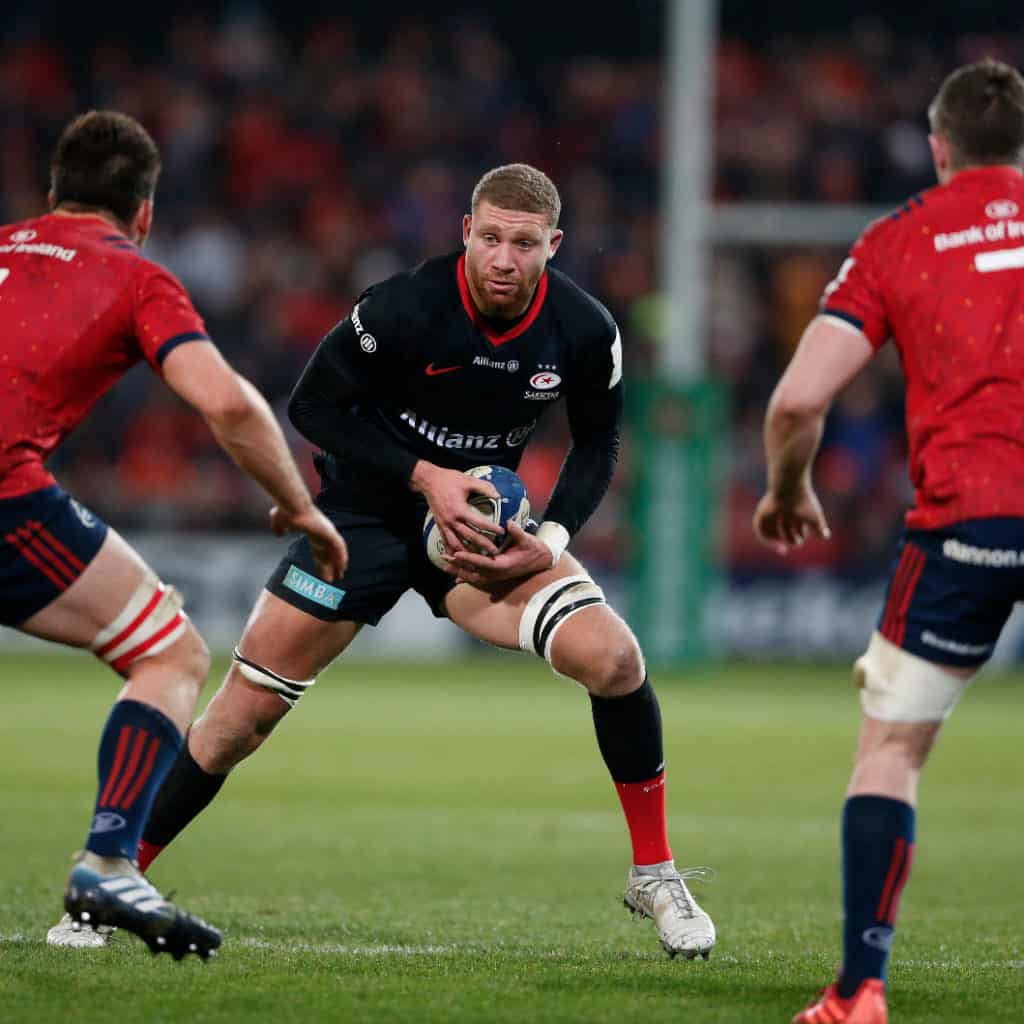 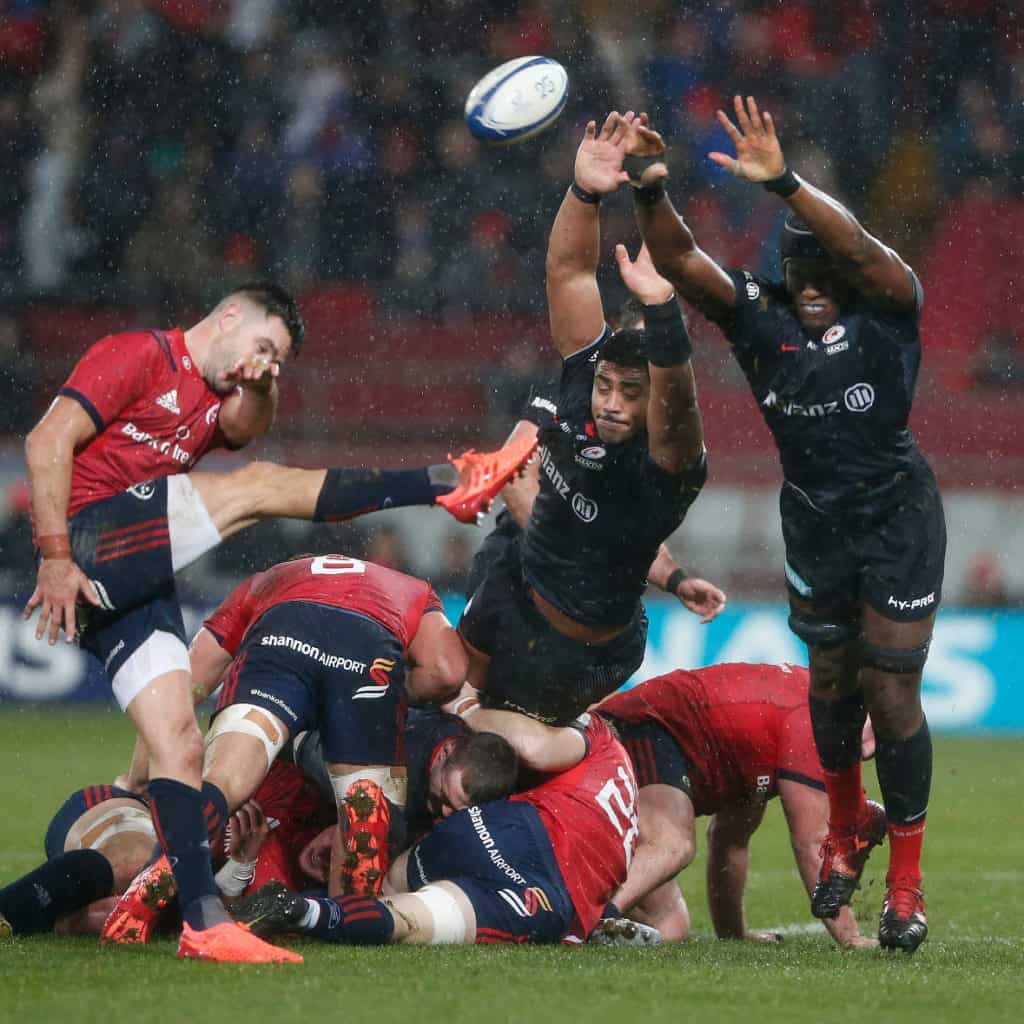 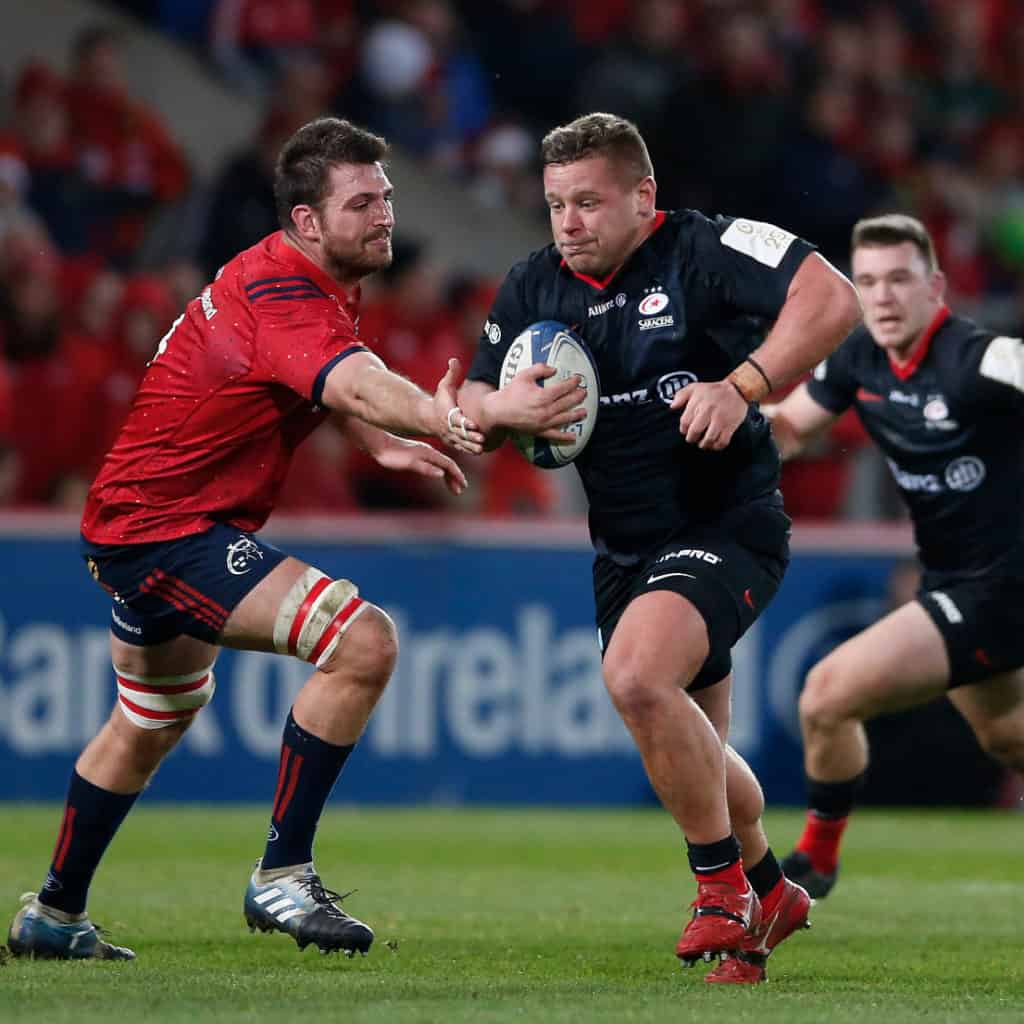 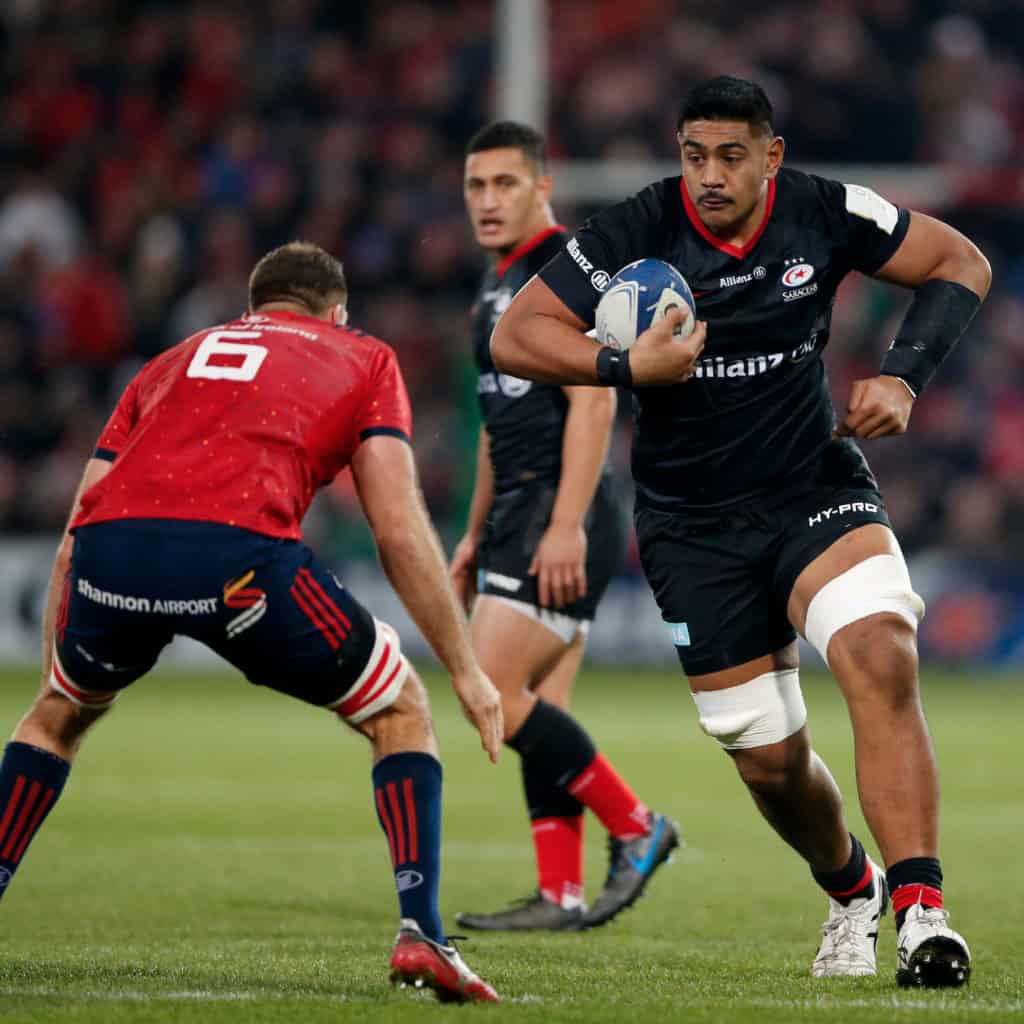 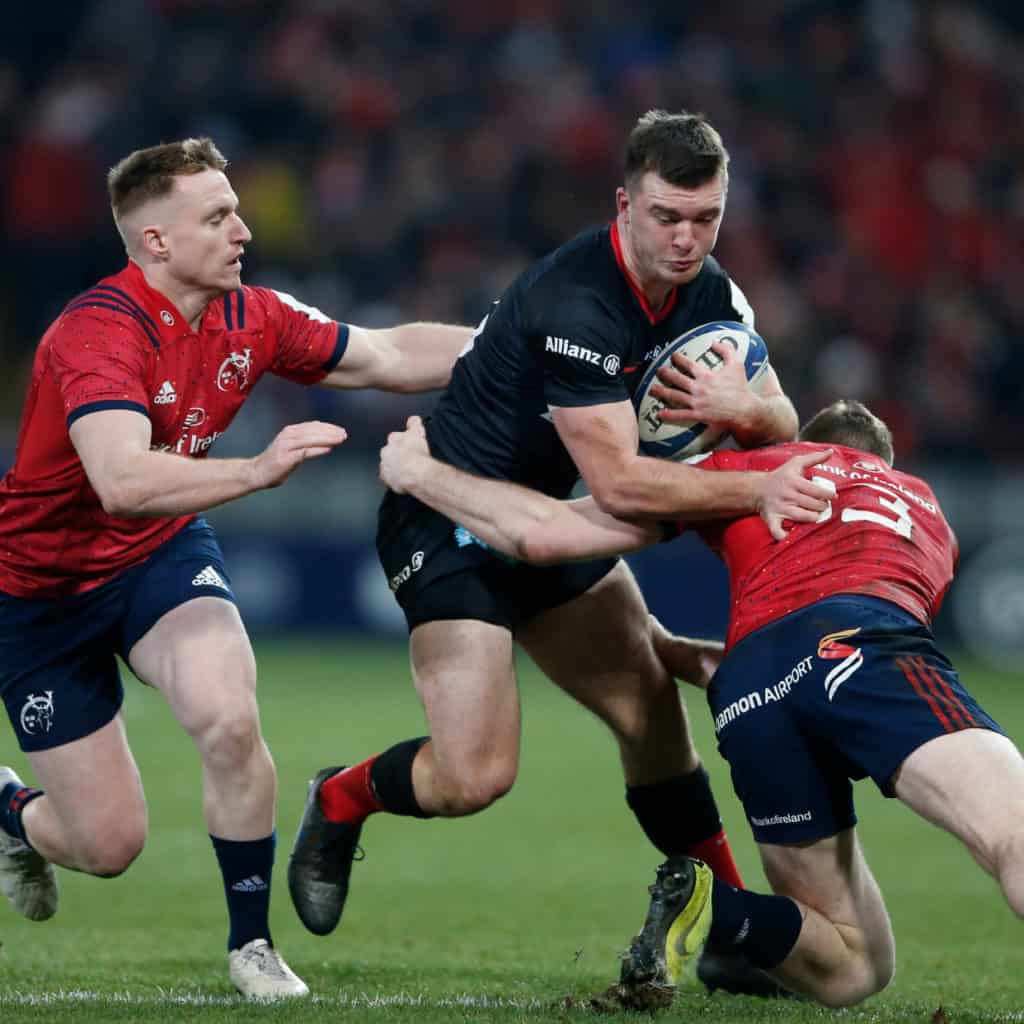 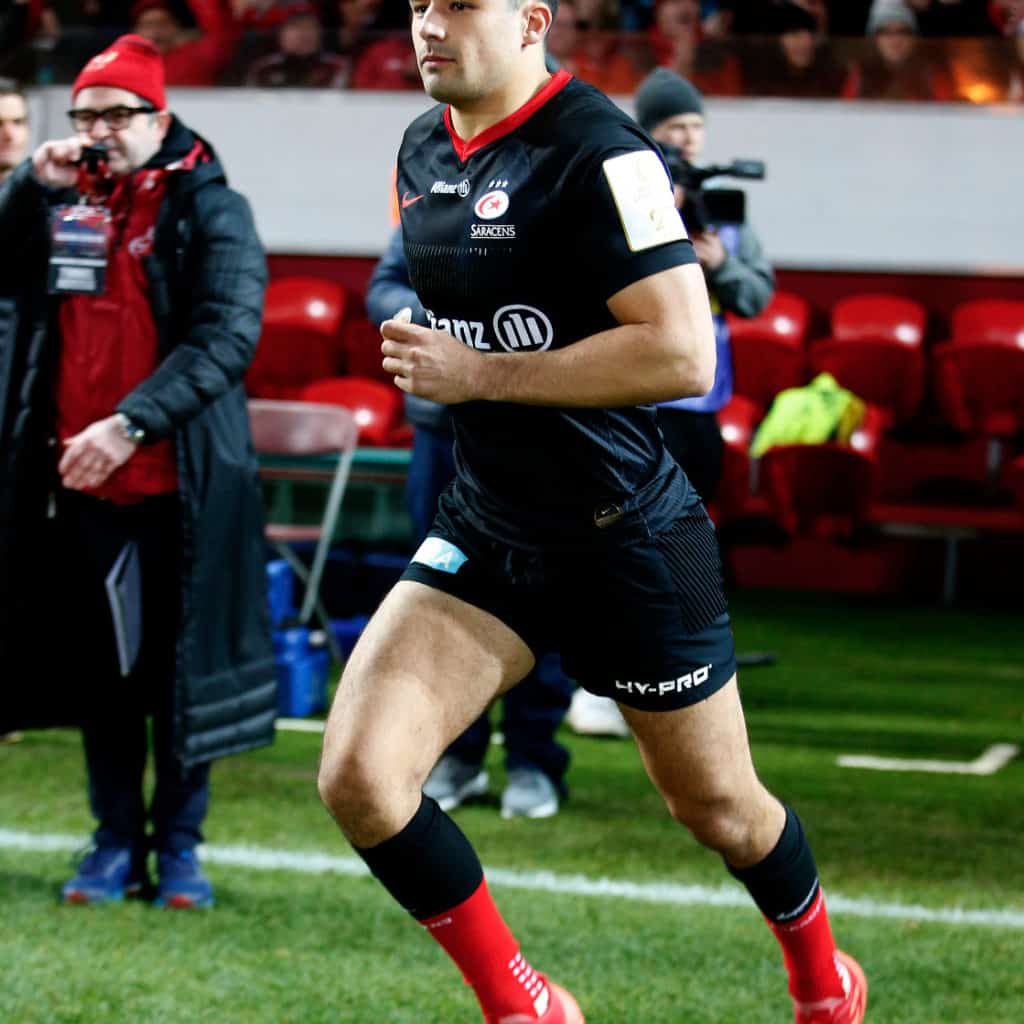 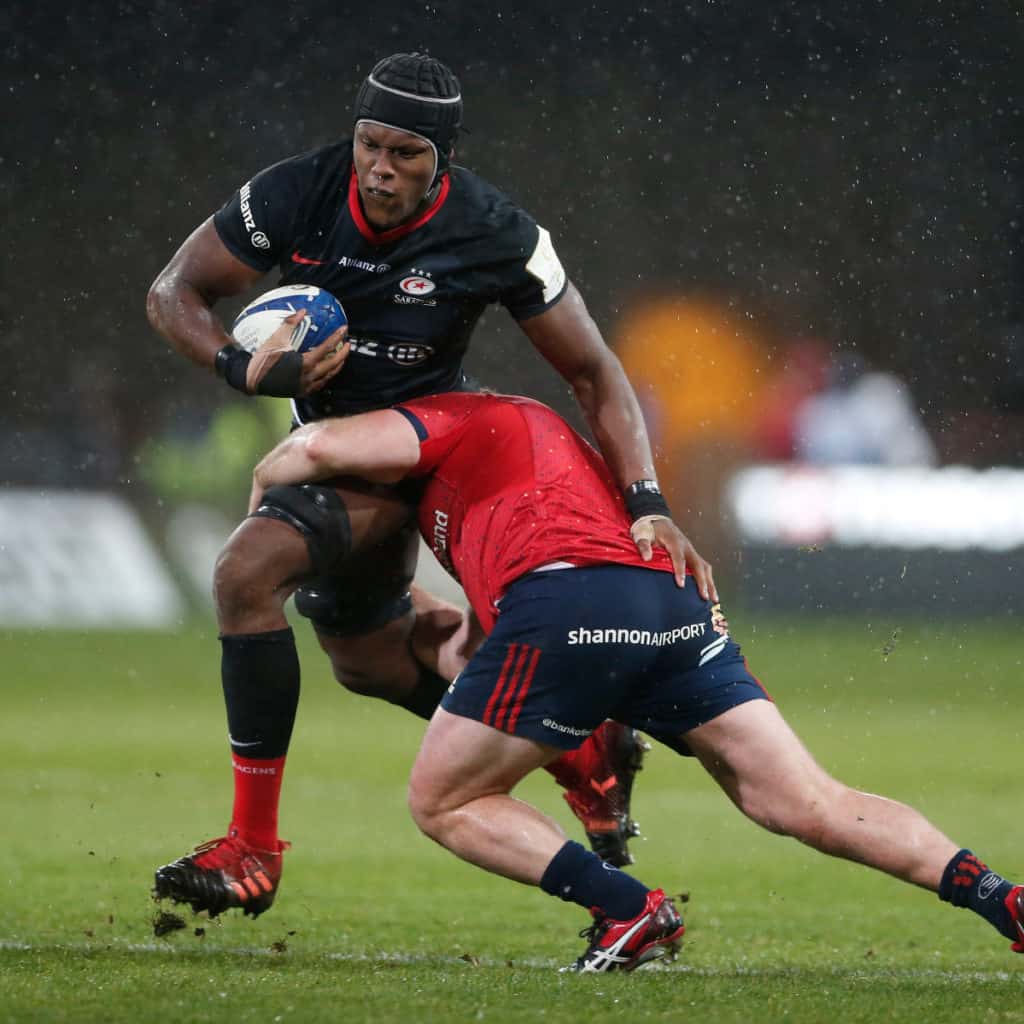