Nick Tompkins scored a hat-trick as 14-man Saracens recorded a 54-28 win over Northampton Saints in the Premiership Rugby Cup.

Two quickfire scores from Rotimi Segun and Tompkins put Sarries out in front but Symons’ second and a David Ribbans try eclipsed the gap.

Replacement Ben Spencer, on his first appearance of the campaign, burrowed over ahead of another Tompkins effort and a bit of Manu Vunipola magic strengthened Saracens’ hold on the match.

Charlie Watson received a red card late in the second half, but Tompkins rounded things off in style running in from distance.

Sarries almost got off to a perfect start on a windy afternoon in Northamptonshire. Andy Christie was quick out the line to pick off a flat pass and a combination of passes between Tompkins, Segun and Alex Lozowski nearly saw the latter dive in the corner, only for a last-ditch tackle to deny the outside centre.

Lozowski should have dotted down just seconds afterwards but knocked on over the line under pressure from former Sarrie Taylor, however it wasn’t long before Adam Powell’s side were on the board.

A miss pass to the left took out two Saints defenders leaving Alex Lewington and Gallagher to execute a textbook two on one.

Northampton levelled on the 15-minute mark when Ryan Olowofela’s dancing feet set up the platform for Symons to crash under the sticks for a converted score.

Whiteley’s penalty edged Saracens a point ahead though that was short-lived as Taylor snuck blind from a scrum to turn the match on its head once more.

An injury to Sean Reffell, which saw the young flanker leave the field on a stretcher, halted proceedings at Franklin’s Gardens for a lengthy period and the stoppage allowed the Men in Black the opportunity to regroup.

They did just that and Gallagher’s scything break and one-two with Nick Isiekwe provided space for Segun to power home, and a bulldozing Josh Ibuanokpe carry led to Tompkins bruising his way to the whitewash.

Symons doubled his try tally in response for Saints but it was a Sarries who ended a topsy-turvy half on top via the boot of Whiteley.

And the scrum-half added another three early in the second period to keep the scoreboard ticking over.

Saracens’ defence was then put to the test. Gallagher smothered a Rory Hutchinson grubber ahead of the speedy Olowofela before Saints hammered the away team’s fringes. It eventually paid off, second row Ribbans the beneficiary.

Spencer came off the bench thereafter and made an immediate impact. Elliott Obatoyinbo’s soft hands sent Segun rampaging up the right wing and on his left shoulder he found the England international in support.

The advantage stretched to 12 just past the hour. Tompkins impressively muscled over and even more impressive was Vunipola’s contribution.

The young fly-half superbly slotted a conversion from the touchline and grabbed a try of his own following the restart. Racing on to an inside ball, he ghosted into the backfield and sold a dummy to trot in unopposed.

Both sides were reduced to 14 men in the closing stages. Saints were only without their full contingent for 10 minutes as Symons saw yellow for holding on to Watson’s leg at a ruck but the Sarries man was sent off for his part in the incident, making contact with the 12’s head in his attempts to free himself.

The damage in personnel didn’t affect the final outcome as Tompkins capitalised on a loose ball to collect his hat-trick and seal a fine victory on the road. 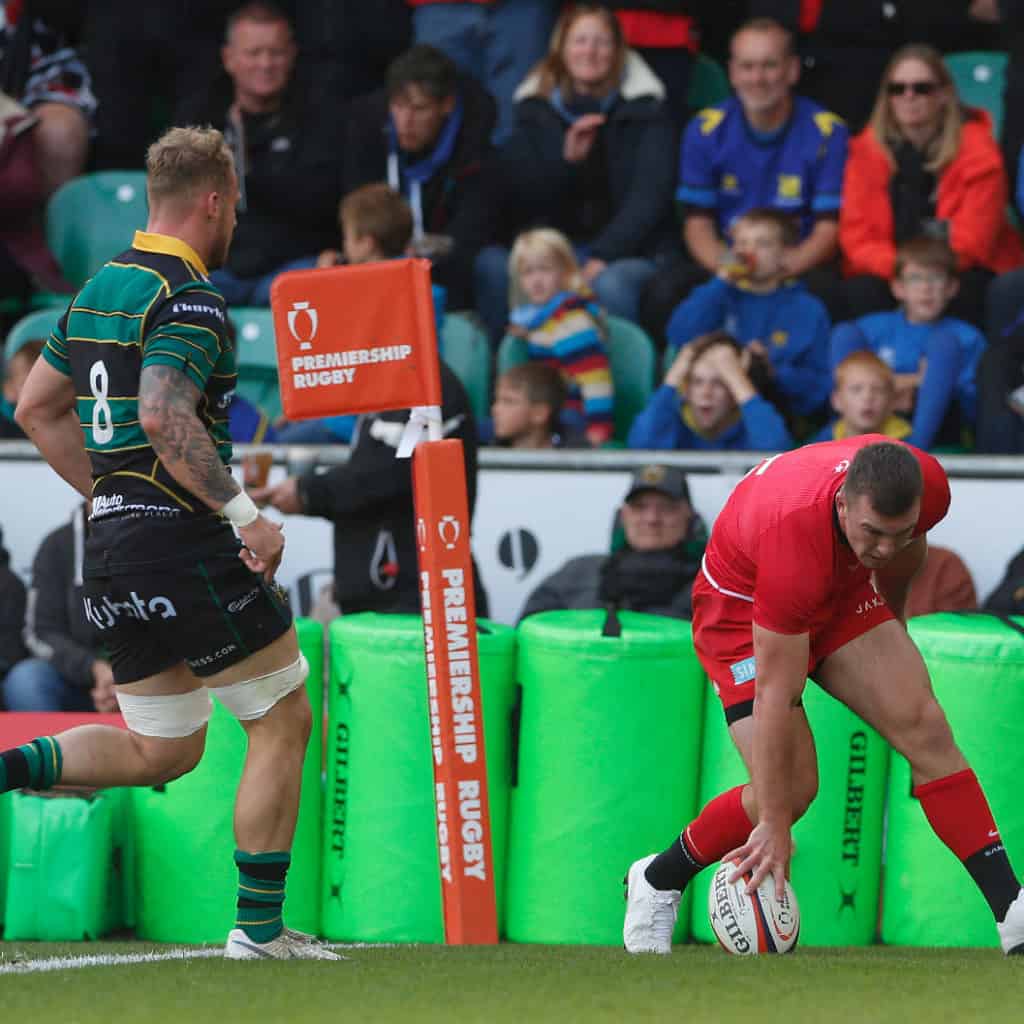 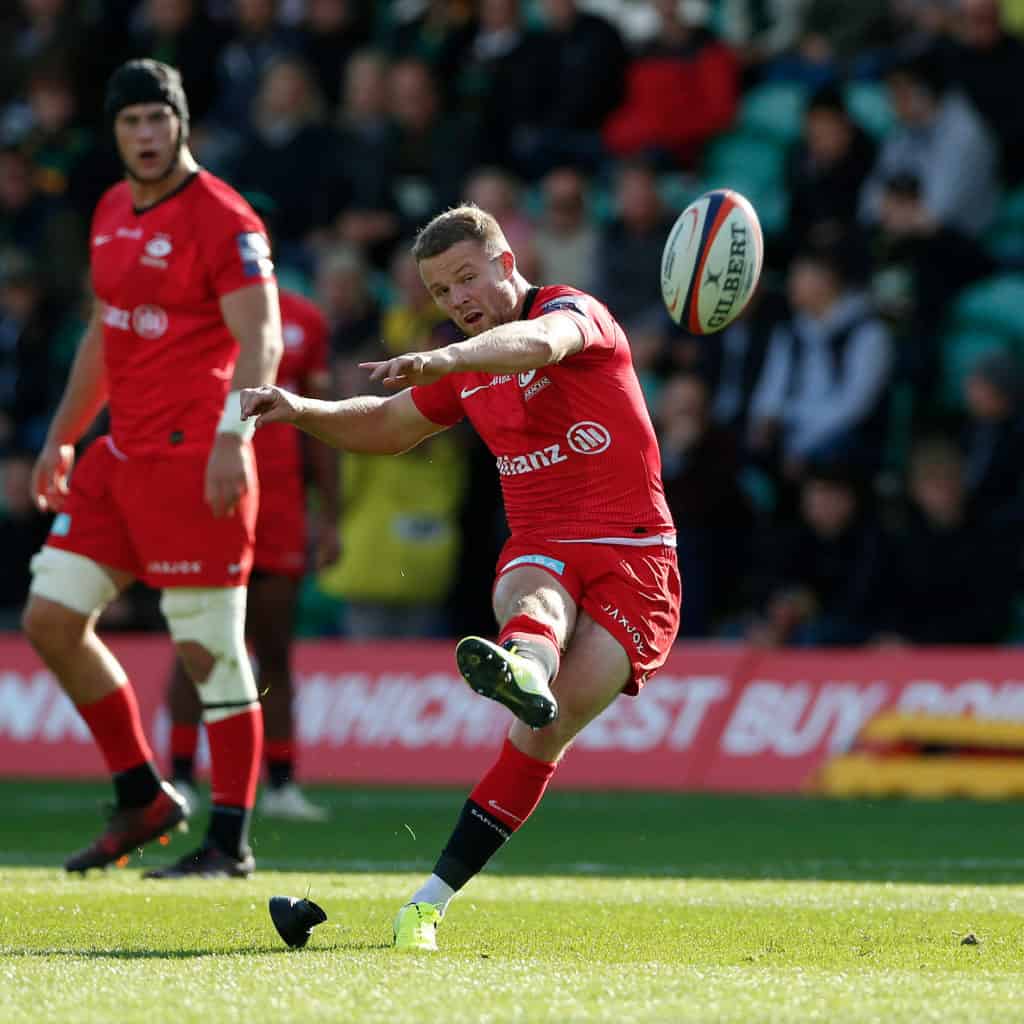 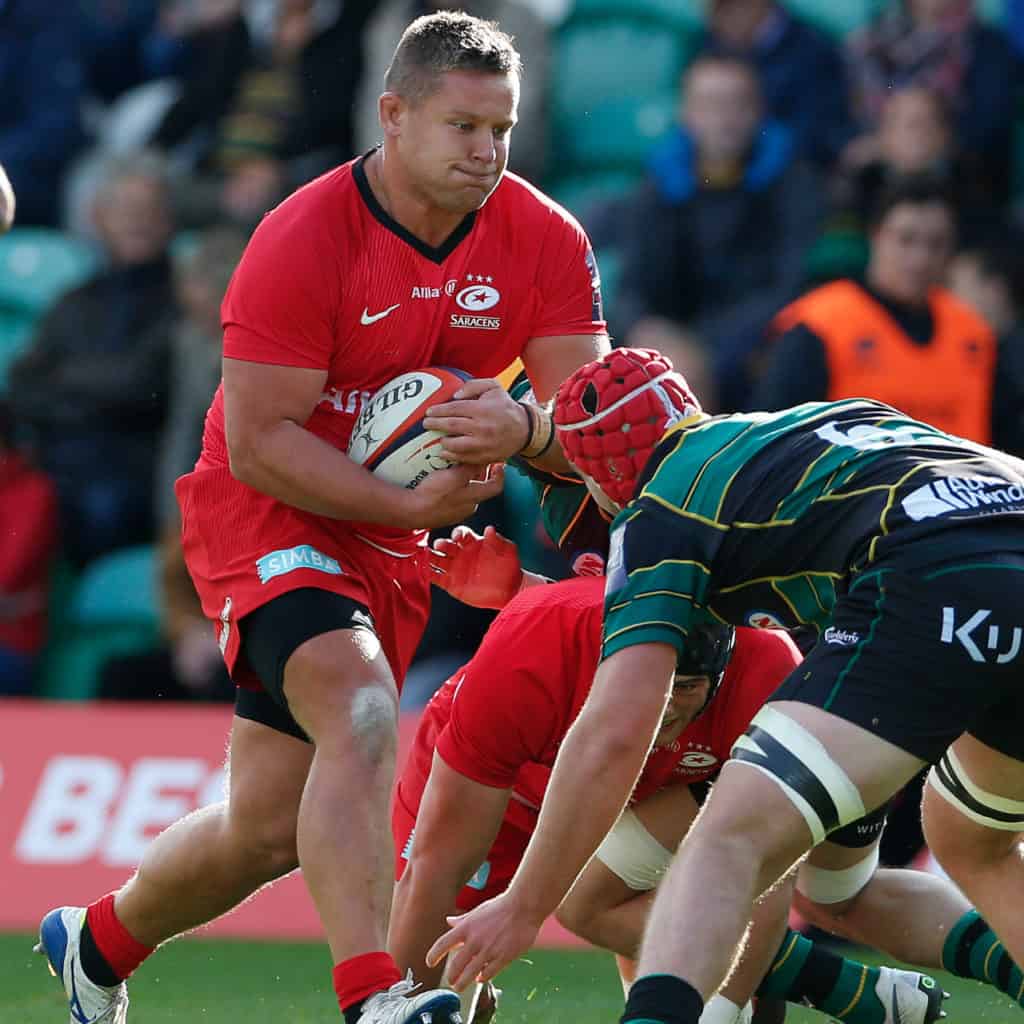 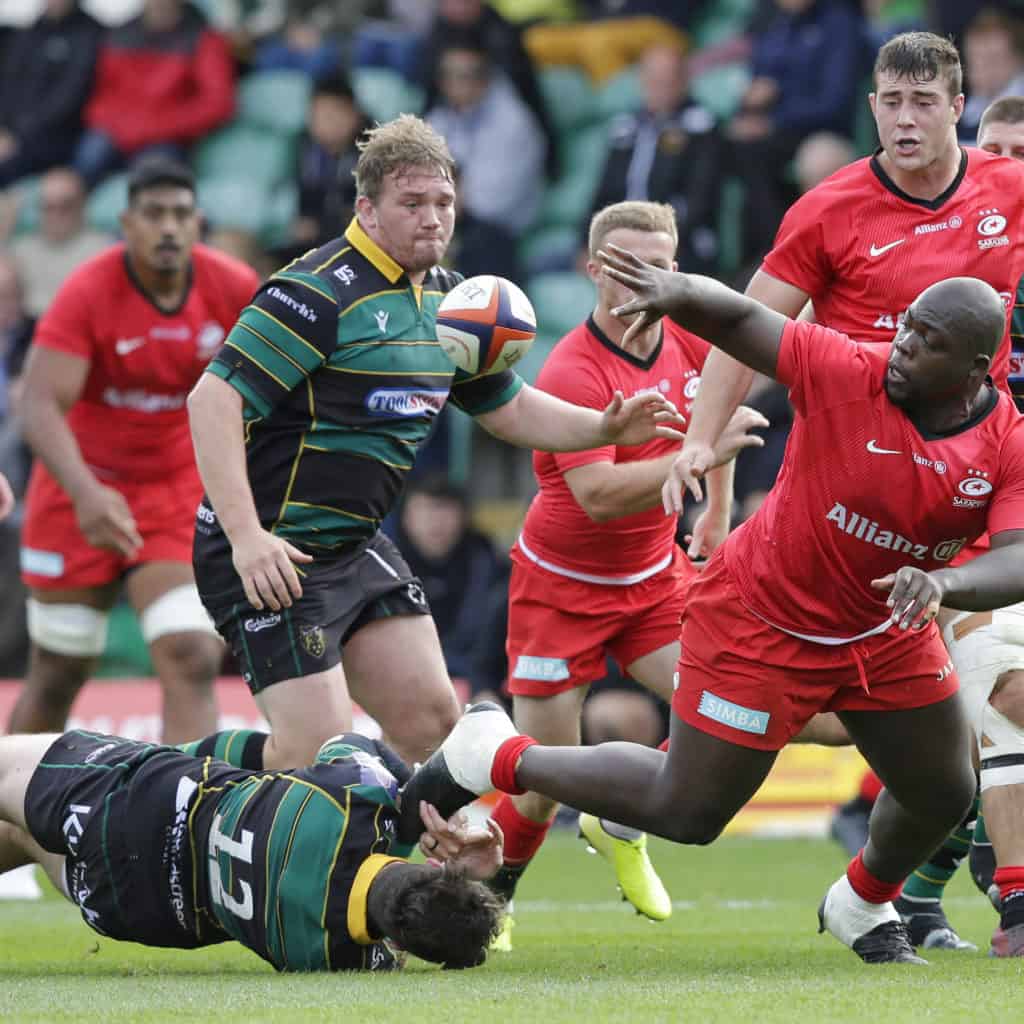 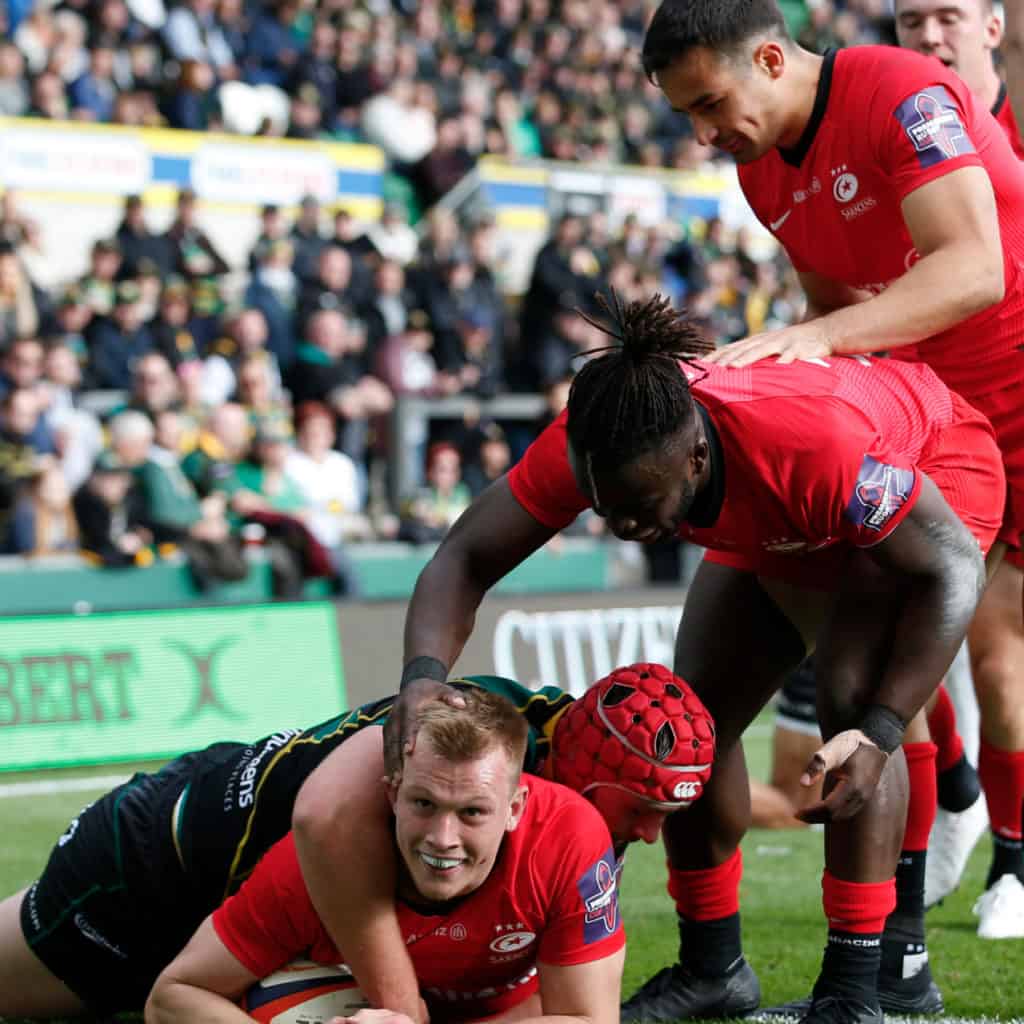 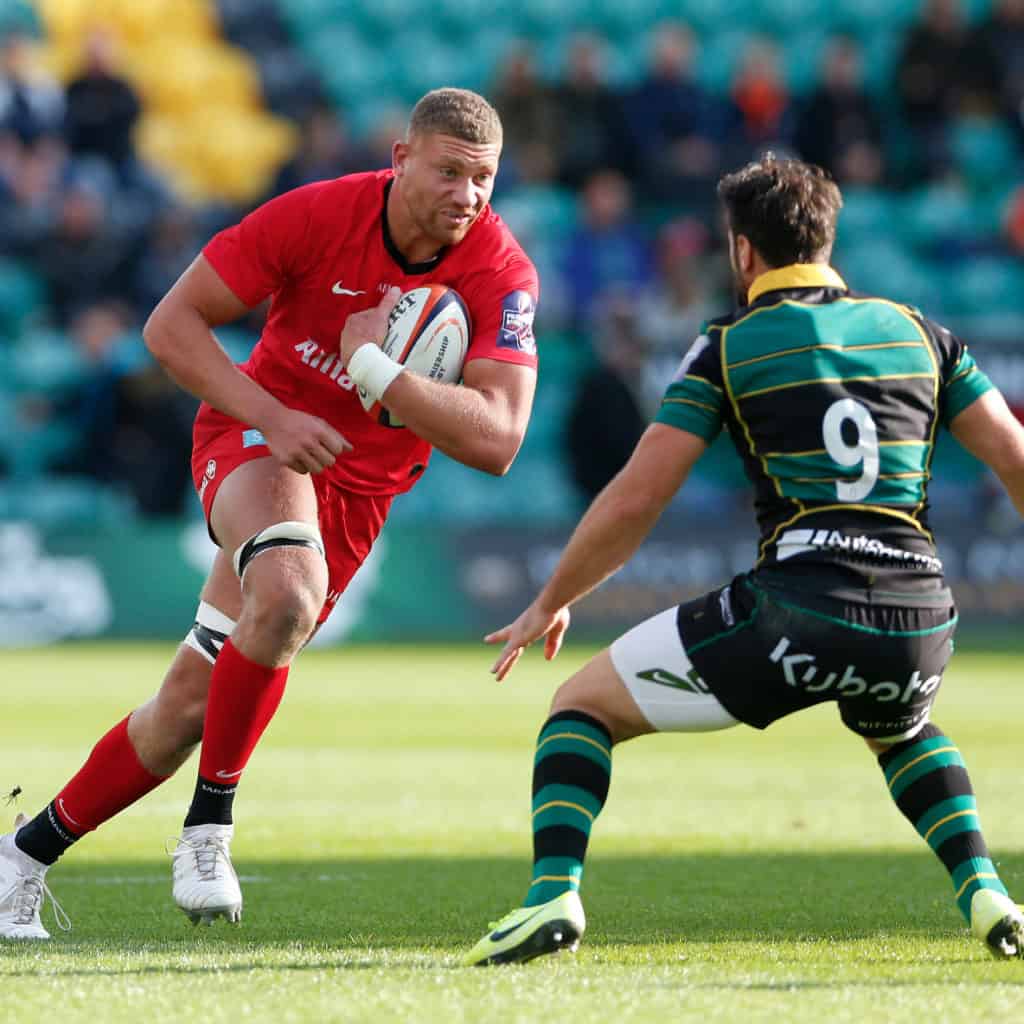 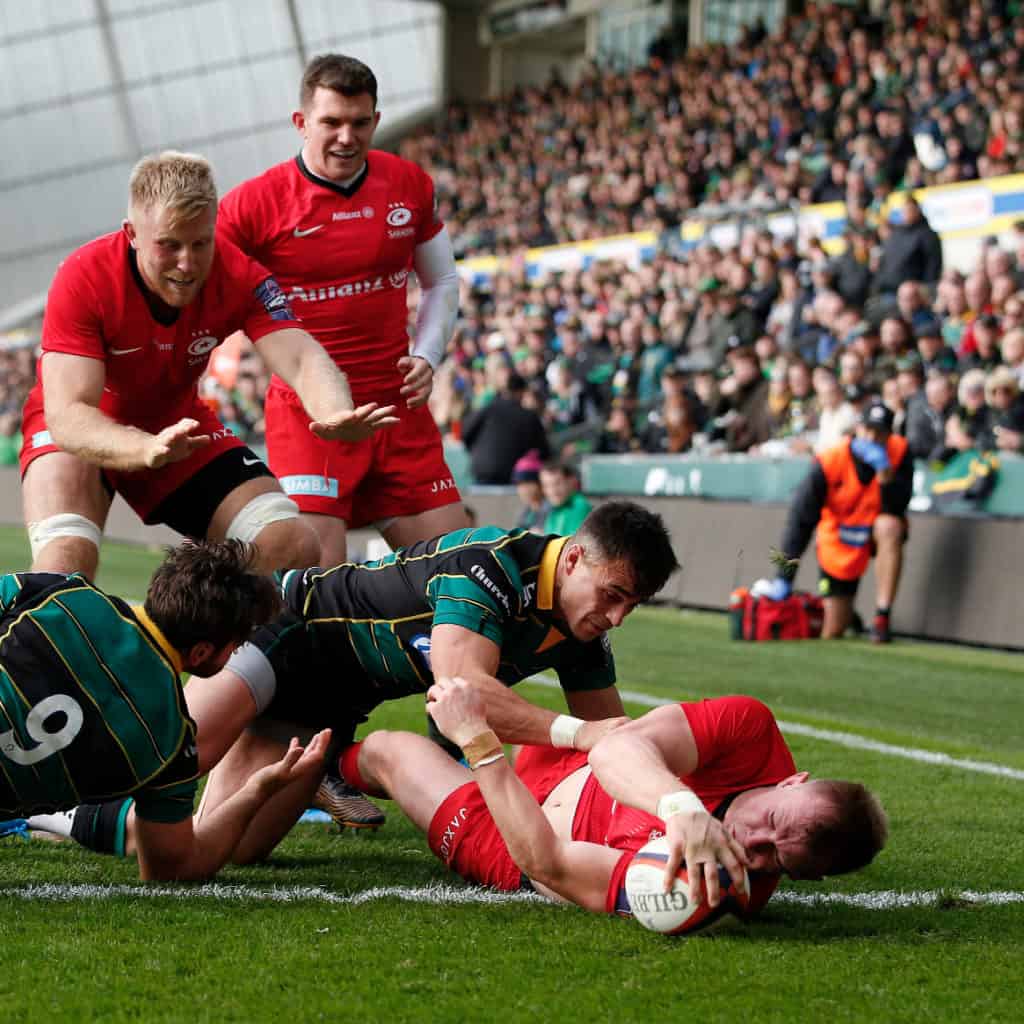 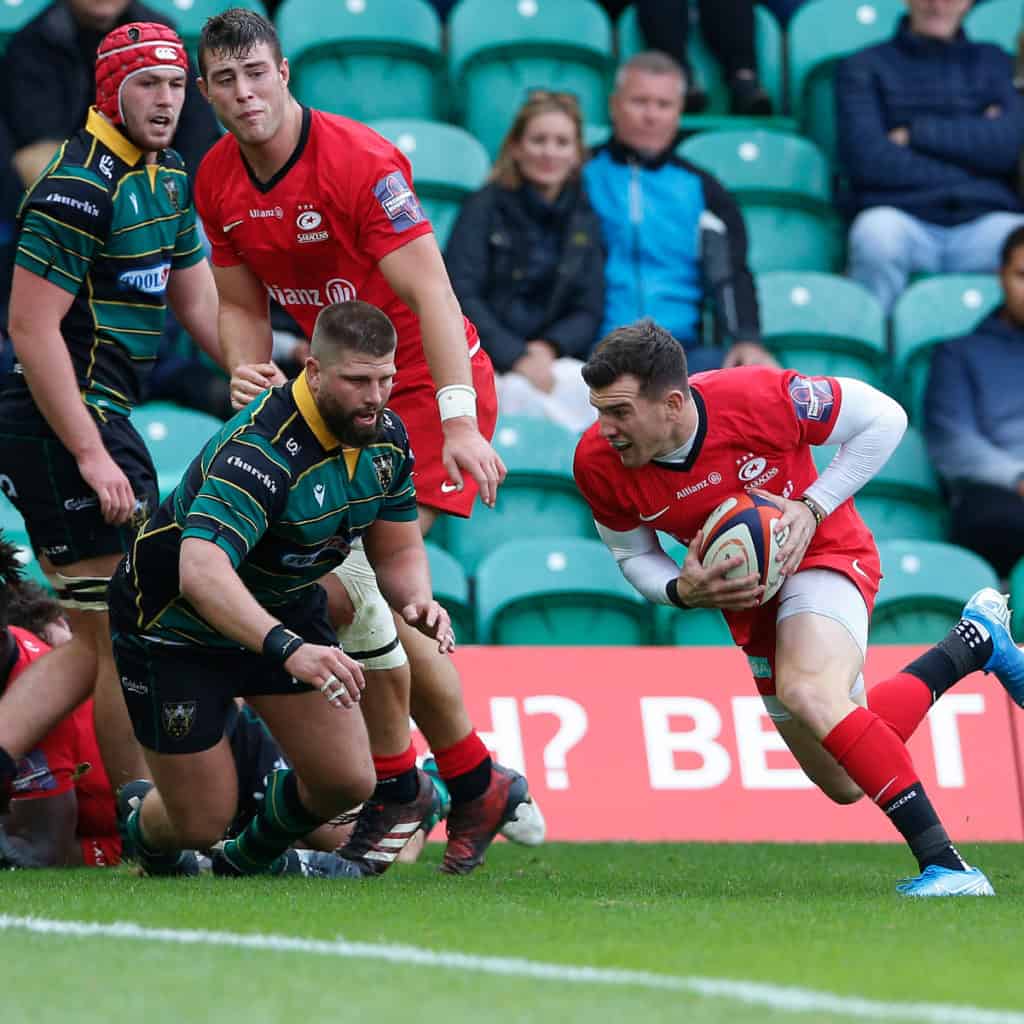 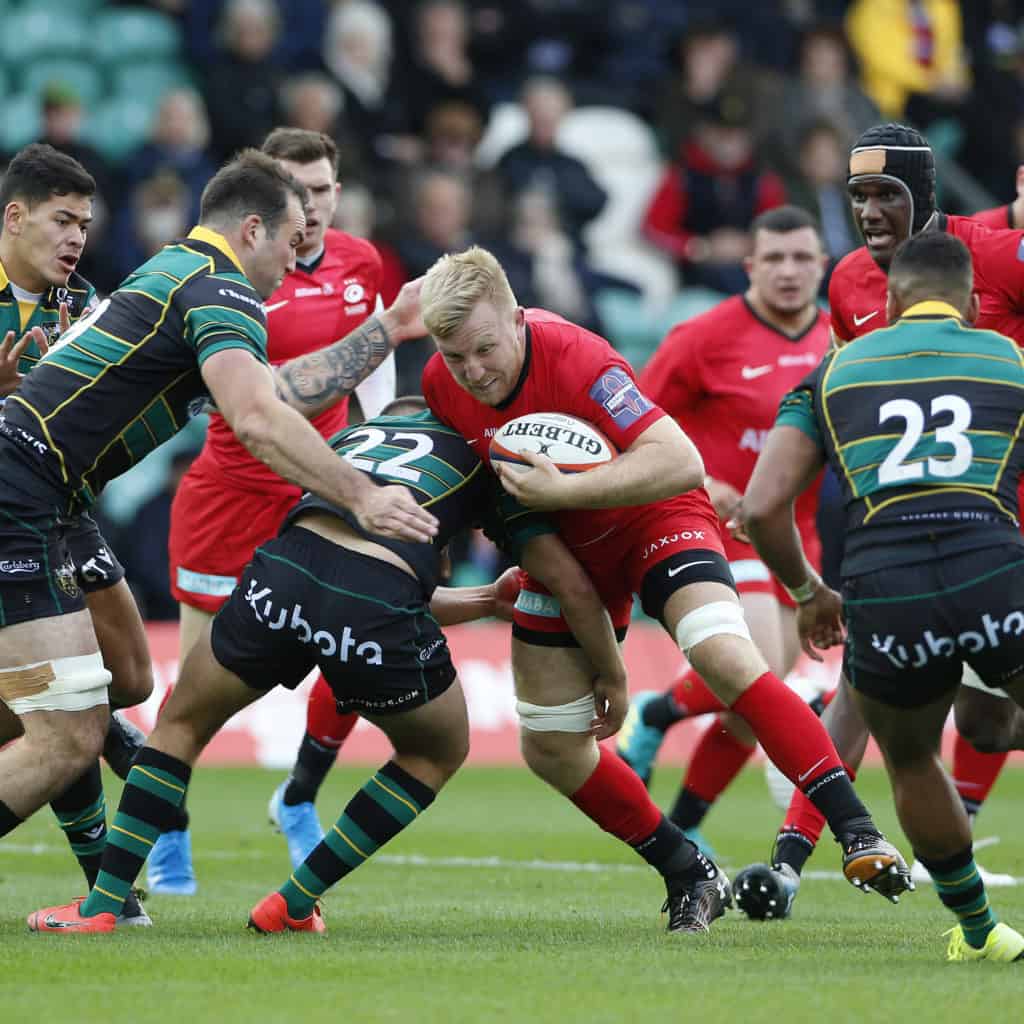 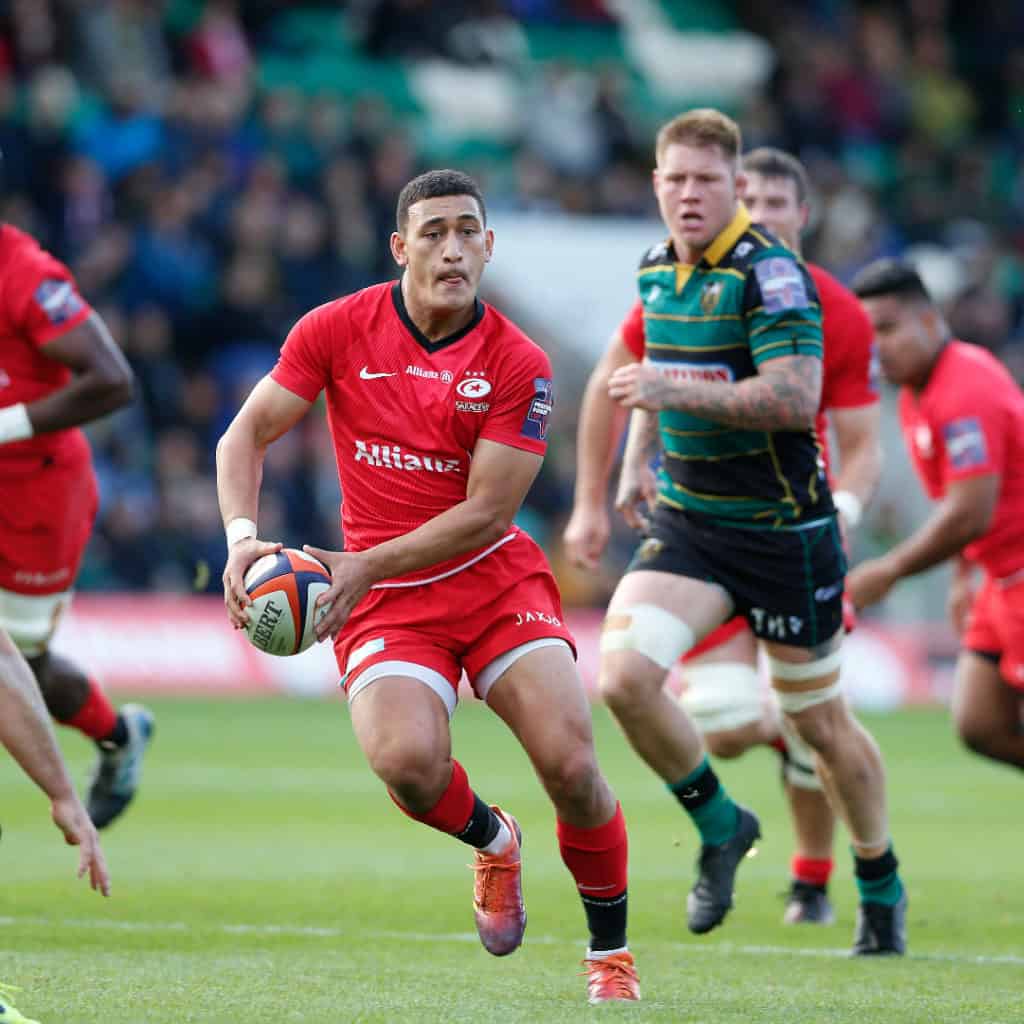 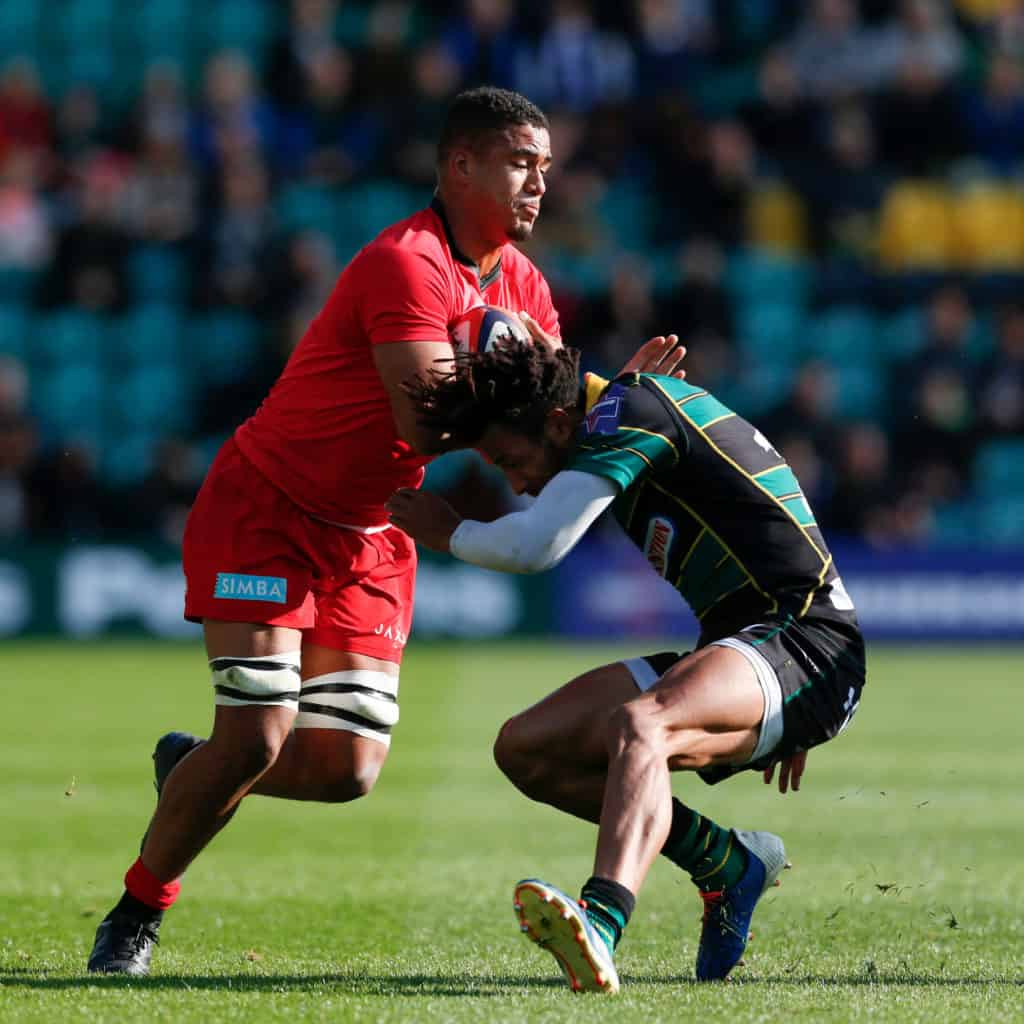 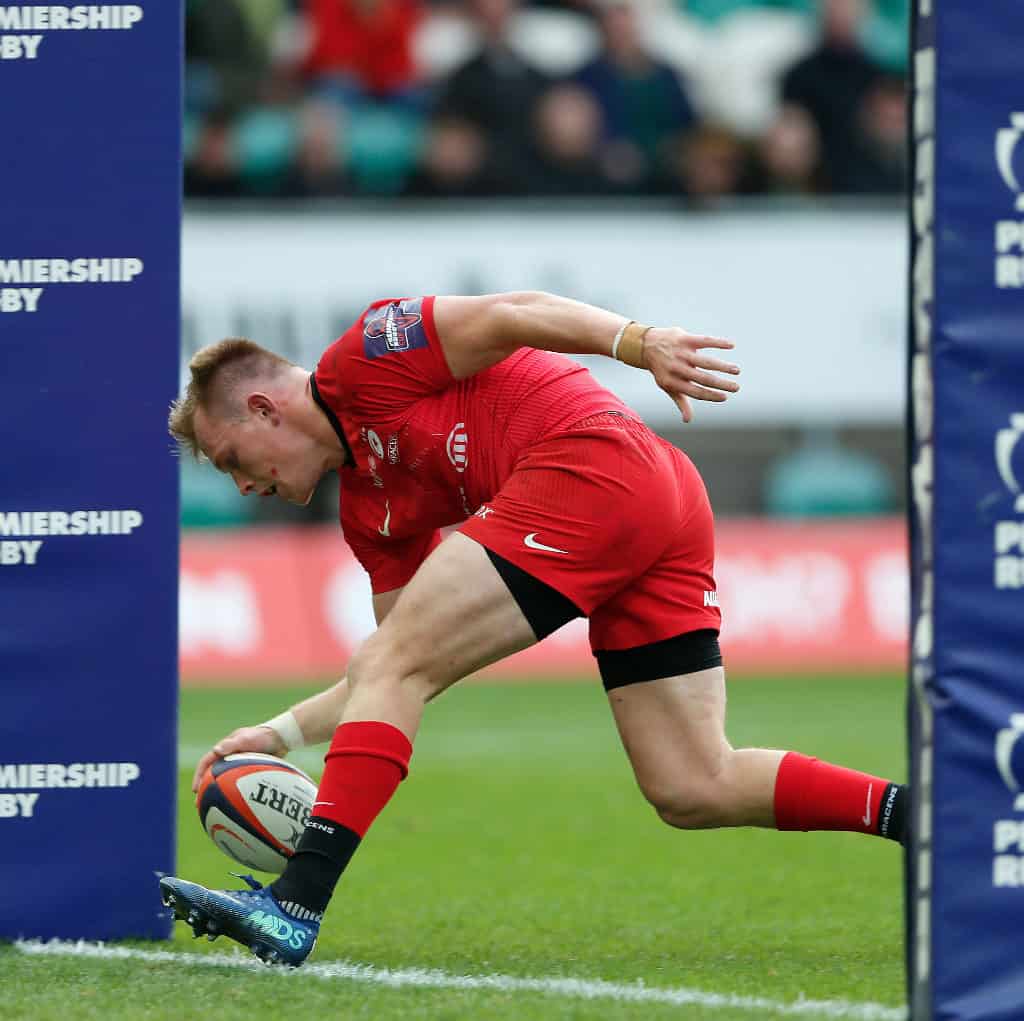