“I think this game really showed the resilience and how tough this team really is.” – Maro Itoje

In a nail-biting European contest Saracens edged out Racing 92 by 27 points to 24 at Allianz Park this afternoon to keep their hopes of qualification to the knock out stages alive.

In topsy-turvy first half Saracens took an early lead before Racing 92 hit back with three tries of their own. A red card for Will Skelton on the stroke of half time threatened to hang over the second half but a Maro Itoje try levelled the scores before Owen Farrell claimed the lead for the Men in Black from the tee to secure the win with just minutes left to play.

A high tempo start to this afternoon’s proceedings saw the home side mount a two try advantage within the opening ten minutes. Right from the kick off Saracens made an instant impact on the game; a move from the lineout releasing Billy Vunipola who zipped forward to the line before offloading to Maro Itoje who claimed the first five points of the afternoon. As Saracens secured their second score only minutes later it was the forwards at work once again; George Kruis claiming the lineout to set up the driving maul which powered Mako Vunipola lover the line.

Despite Saracens’ emphatic start, as the half wore on the visitors found a way to muscle their way back in to the game. Two breakaway tries from Racing, one from Virimi Vakatawa and a second courtesy of Louis Dupichot, sliced Saracens’ lead leaving just an Owen Farrell penalty to separate the sides as the half hour mark approached.

With two tries in the bank Racing, who had seemingly been caught off guard by Saracens’ early dominance, now had that all important momentum of their own and it wasn’t long before the French side capitalised with a third score. Vakatawa’s quick feet skipping through the Saracens defence to the line for his second of the afternoon and to give Racing a narrow 17-21 lead.

Chasing the game Saracens moved in to the final stages of the half with a renewed energy. The threat from Racing winger Vakatawa remained a constant thorn in the side of the Men in Black’s defence but some bright play in attack created a number of close opportunities for Saracens to add to the score sheet.

As the half time whistle approached however Saracens found themselves reduced to 14 men when Will Skelton was shown red by referee Nigel Owens for a high tackle on Racing fullback Brice Dulin and it was Racing who went in ahead at the break, leading Saracens by 21 points to 17.

Back out after the break Racing extended their lead with a long range penalty effort from the boot of Teddy Iribaren but it was Saracens who would bag the first try of the second forty. The try itself was a fine team effort finished expertly by Maro Itoje but it was Owen Farrell’s conversion to level the scores which was greeted by raucous cheers from the Allianz Park crowd, who had been in full voice throughout the afternoon.

With the scores tied at 24-24 the two sides continued to go toe to toe with each other in what was a lung busting period of rugby.  With just over 20 minutes left to play Racing were reduced to 14 men when flanker Le Roux was shown yellow for a late tackle on Owen Farrell. Elliot Daly stepped up for the long range penalty and while the kick had the distance it flew wide of the target, preserving the deadlock between the sides.

Saracens’ best chance to take the lead would come as Nigel Owens awarded the Men in Black a scrum with less than ten minutes left on the clock. Time after time Saracens attacked the line only to be frustrated at each attempt by a dogged Racing defence until it seemed there could have a been a score and Nigel Owens called on the TMO to judge whether Jamie George had in fact burrowed over the line. The try wasn’t to be, but Owens brought the game back for a penalty against Racing which Farrell duly slotted to give Saracens the most slender of leads going in to the final five minutes of action. It was a thoroughly nerve-wracking end to the game for the Allianz Park faithful as Racing 92 mounted one last attack in the dying moments of the action. On this occasion though the Saracens defence held firm, forcing the turn over before the ball was kicked to the delight of the crowd to secure an important 27-24 victory. 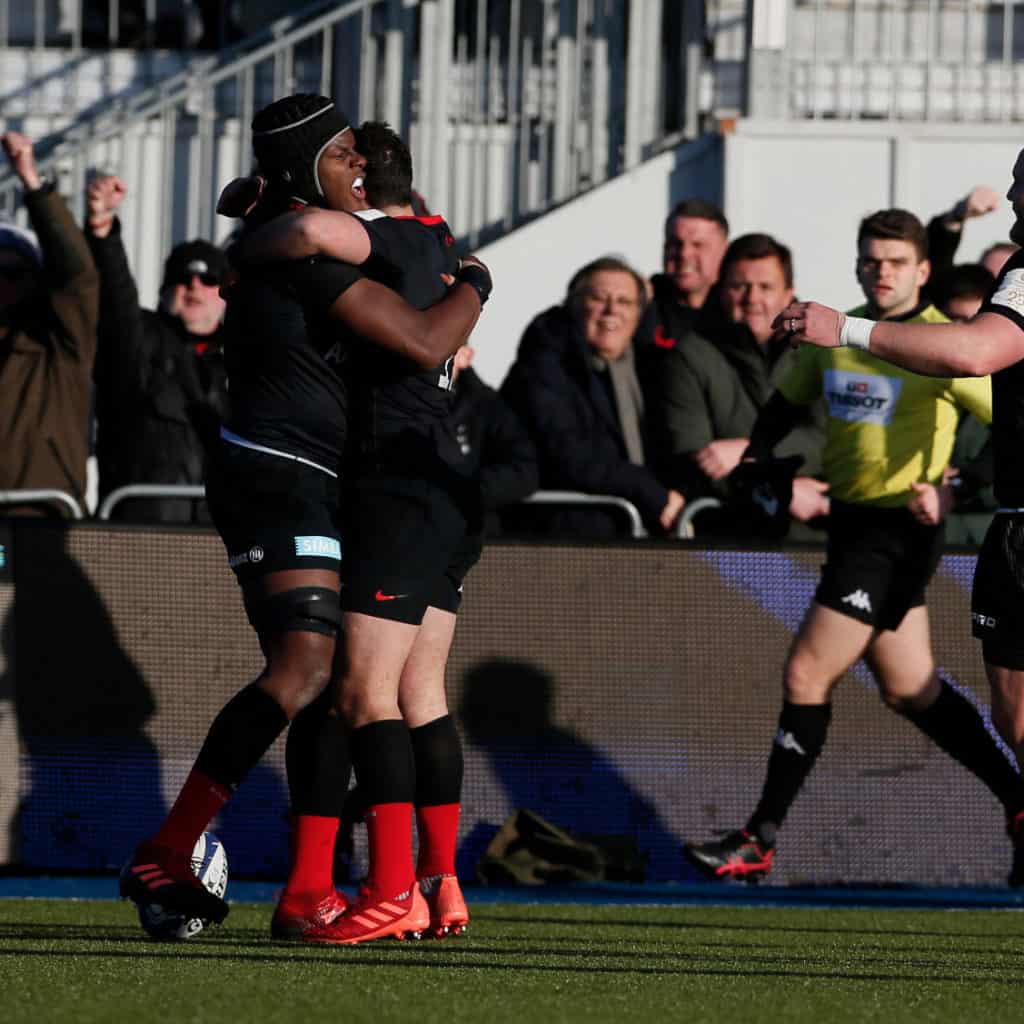 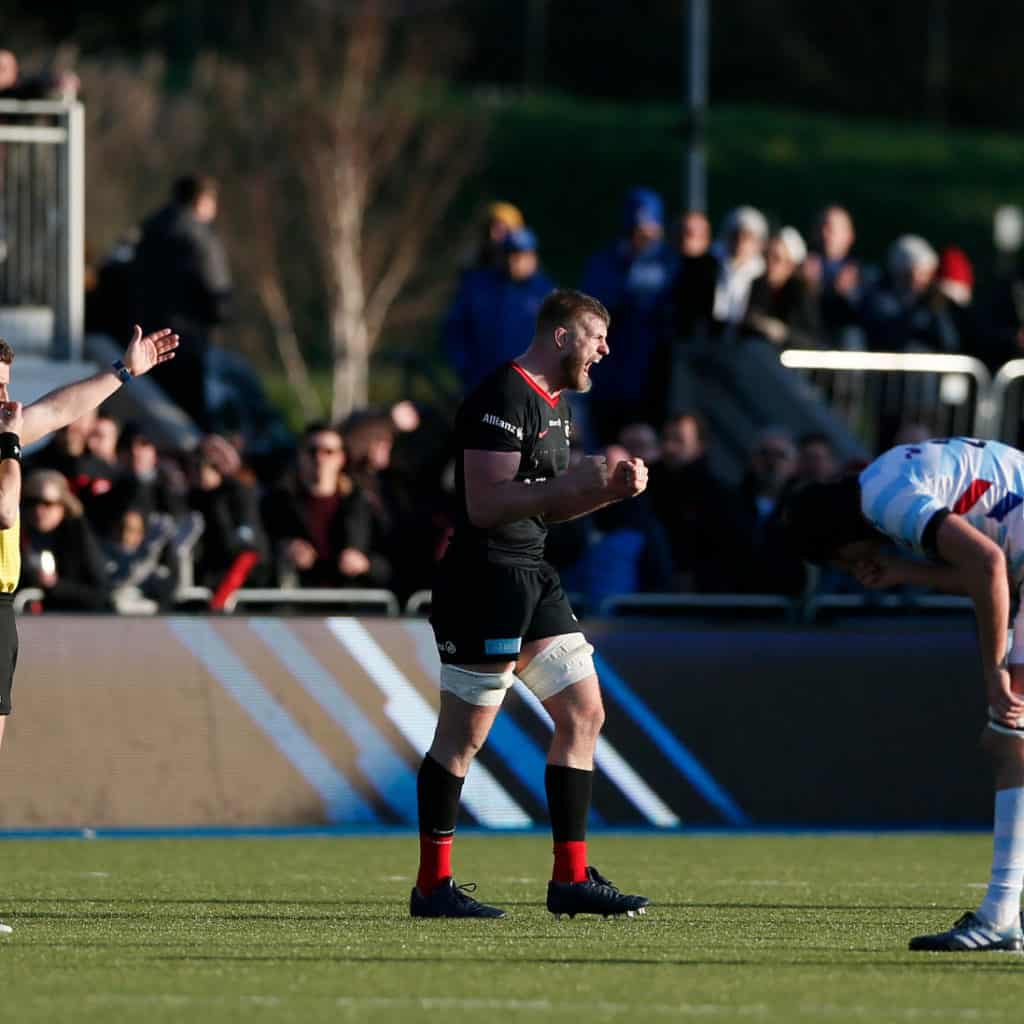 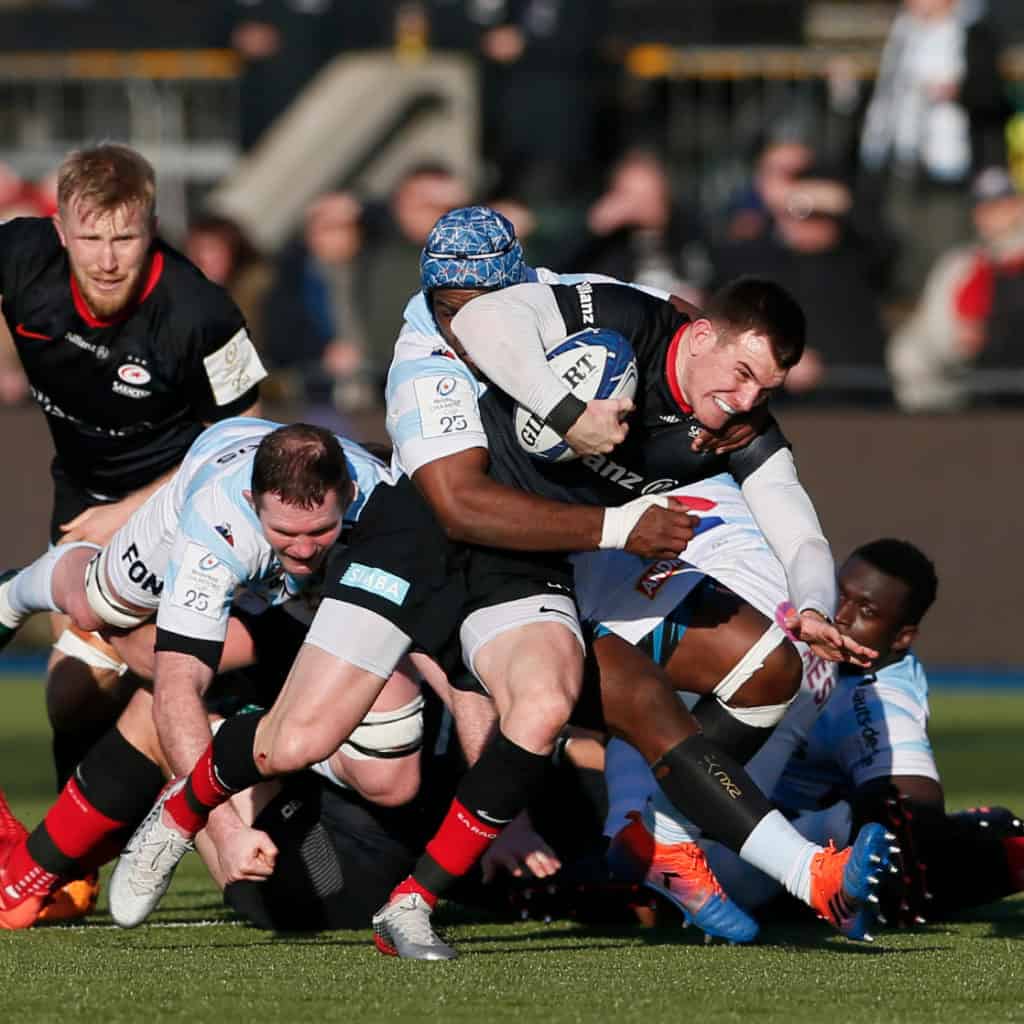 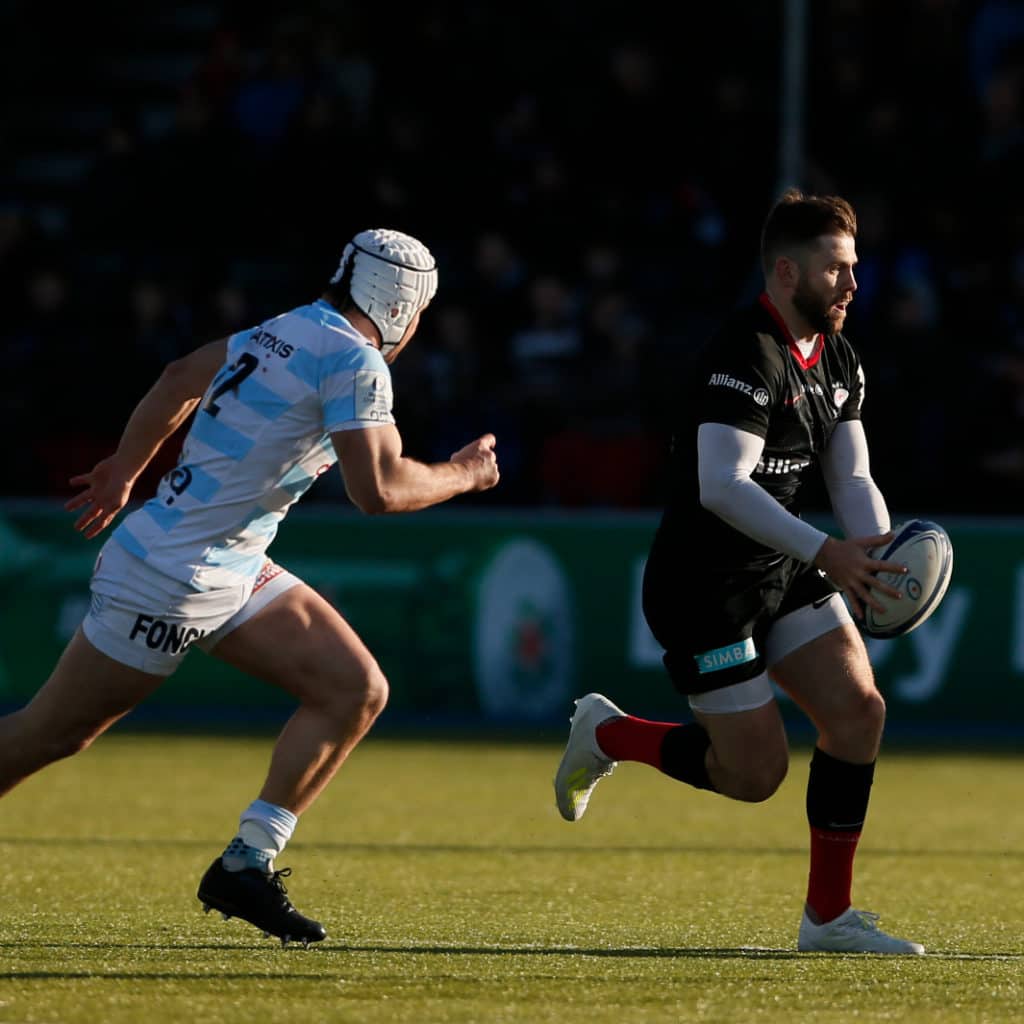 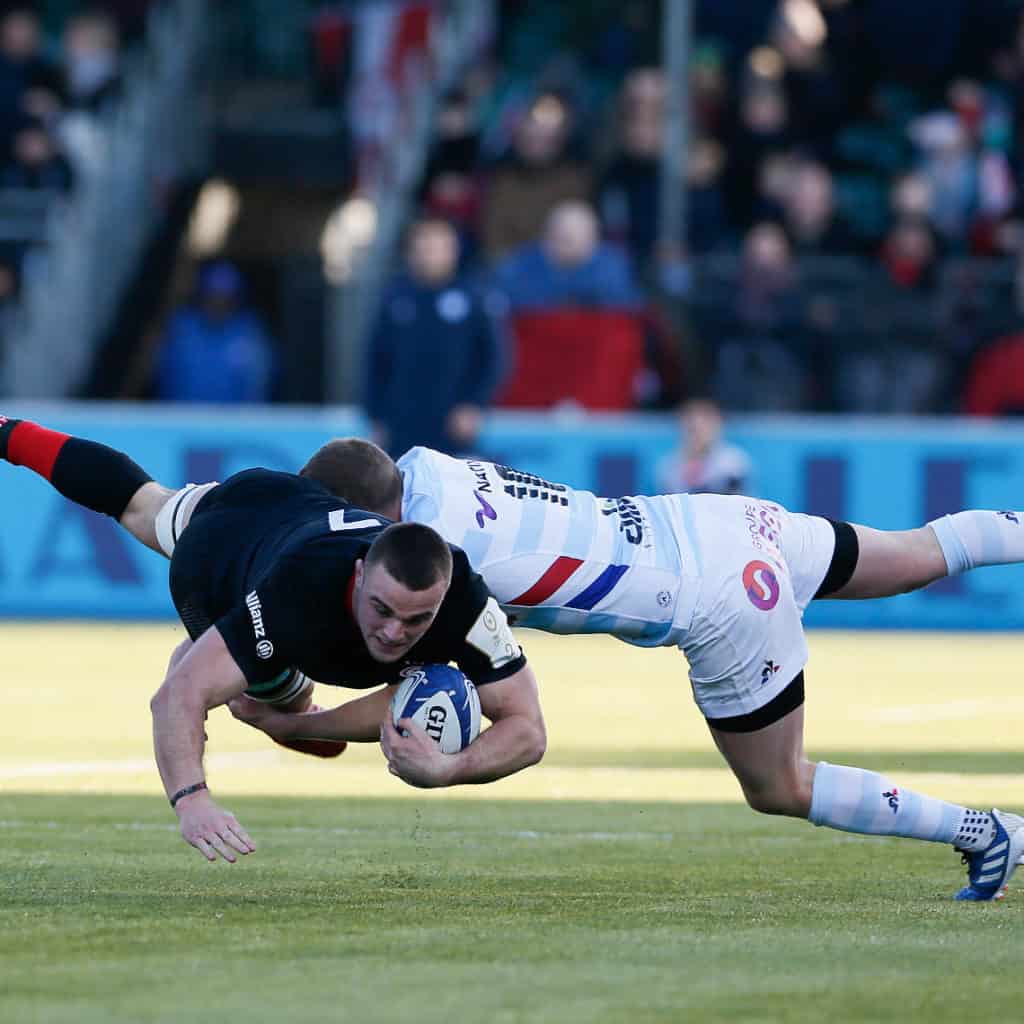 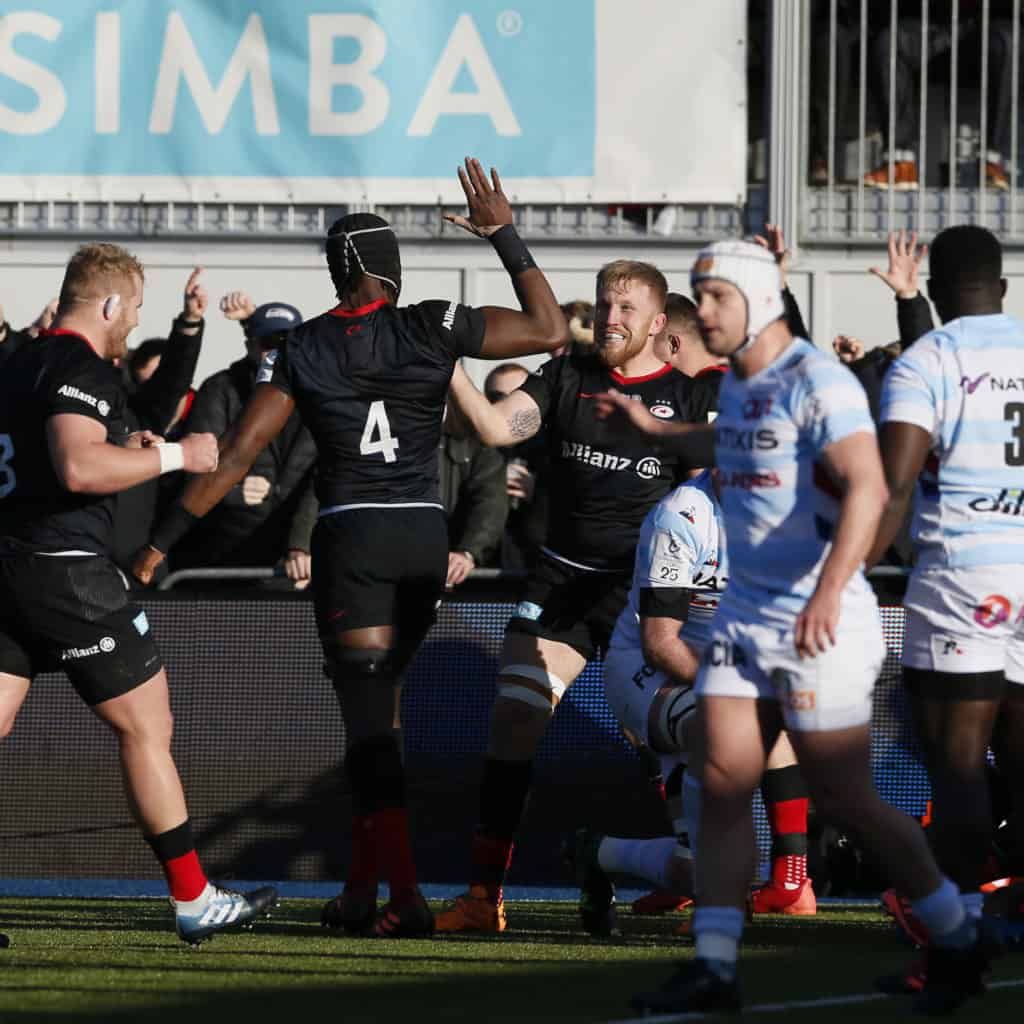 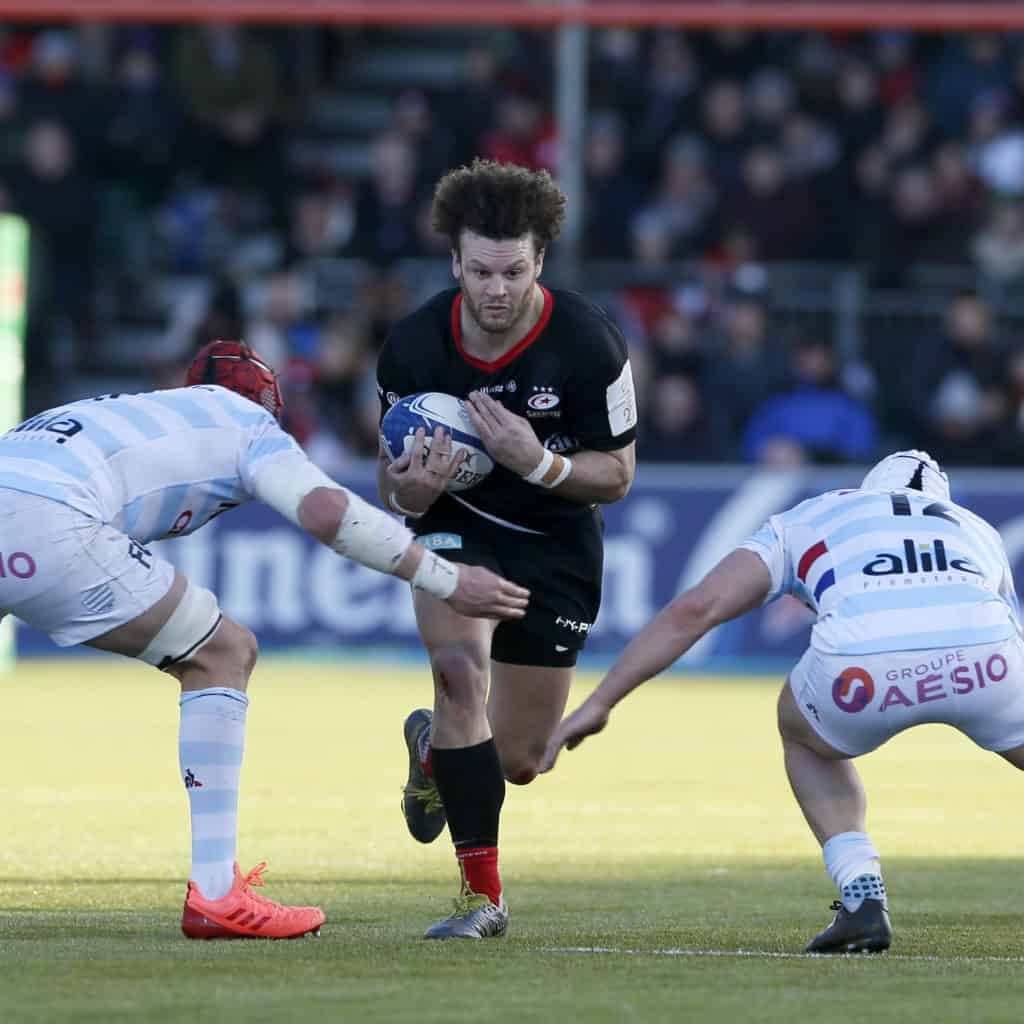