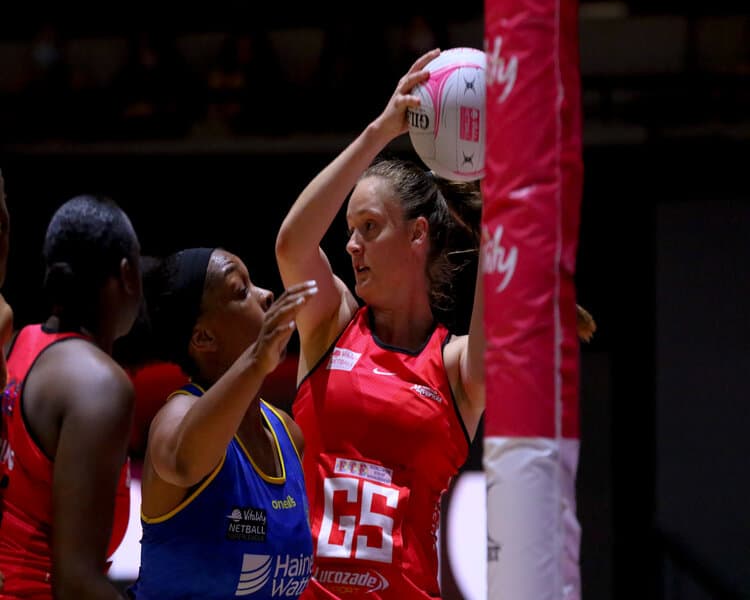 A much anticipated clash between Team Bath and Saracens Mavericks on Sunday afternoon was as exciting and unexpected as any fan could hope.

Mavericks are the only team to have defeated Bath this season and they had all to play for, as they needed the win to keep their top four hopes alive. Team Bath were looking to solidify their place at the top of the leader board and right the wrongs from their last clash against Mavericks.

The first quarter saw Mavericks come out the blocks flying, quickly building up a lead. Their precision and passion was on full display, as they worked seamlessly as a squad to solidify their lead. At the end of the first quarter, Mavericks had built and maintained a 7 goal lead.

Defensively, Mavericks turned over many balls and provided many opportunities to convert to goal. In our attacking end, the connections worked perfectly as they rewarded the squad for their efforts by expanding their lead. At half time, Mavericks lead 23-33, which was a much larger lead than previously anticipated.

Mavericks came together to create a performance which showcased their strength as a team, and the third quarter solidified that, This was a long time coming, as they left both fans and opponents reeling with their stellar performance. At the end of the third quarter, they extended their lead to

Bath came out firing in the final quarter, looking to close the gap and turn things around. They began clawing at the deficit, turning over ball and converting to goal. Mavericks were then struck by two injuries in quick succession, with Beth Ecuyer-Dale and Razia Quashie getting foot injuries. Nevertheless, this did not deter a determined Mavericks side, who kept up the intensity and won the match 35-46.