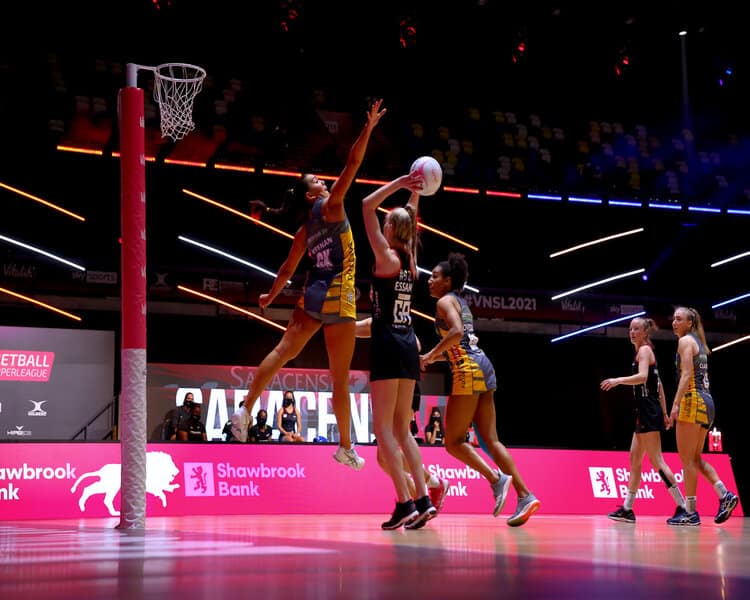 Mavericks punished in London by Rhinos

A tough match on Sunday night for Saracens Mavericks as they took on Leeds Rhinos in their first match at the Copper Box Arena in London. Errors cost them greatly as a punishing Rhinos side took every opportunity to go for goal, winning the match 48-63.

The first quarter started well for both teams, who spent most of the quarter going goal for goal. Both sides were evenly matched in the pressure they were applying in defence, and taking balls to goal confidently. In the final two minutes, Rhinos got into the rhythm of the game and scored 4 consecutive goals, taking the lead as the quarter drew to a close.

The second quarter saw Rhinos extend their lead as Mavericks made some crucial errors. Although Mavericks continued to fight for the ball, these errors allowed Rhinos to creep ahead and at half time, they had an eleven goal lead. The score was 22-33.

Mavericks made several changes at half time, which saw Kadeen Corbin take to the court in Goal Keeper, which is an unusual position for her. However, this was effective as she caused some disruption in the circle. Chloe Essam made a huge impact at GA and the shooting circle worked with ease. Rhinos kept creeping ahead throughout this quarter and they had a 14 goal lead as they went into the final 12 minutes.