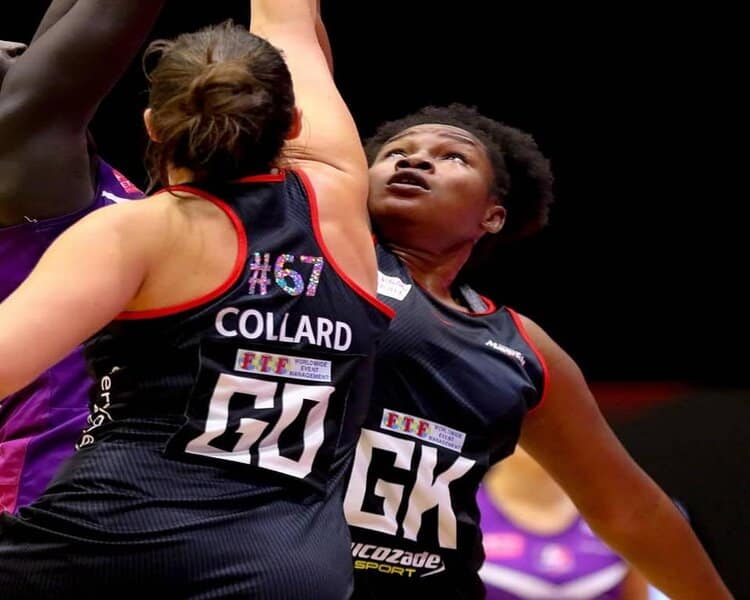 Mavericks suffer defeat in Wakefield by a challenging Loughborough side

Saracens Mavericks saw their first defeat of the VNSL season in Round 3 against a strong Loughborough Lightning side.

Head coach Kat Ratnapala started to make changes to the squad in the second quarter. Gabby Marshall made her first appearance of the season, after sustaining an injury in the pre-season. It would prove to be a quarter with several changes made throughout, as the squad struggled to use their connections against an unforgiving Lightning side. At half time, the score was 26-17 to Lightning.

An impressive display from our defensive unit was the story of the third quarter, with Razia Quashie taking several interceptions, alongside Collard and Zaranyika. Changes continued to be made to our squad throughout the quarter to try and close the gap. Unfortunately, Lightning’s ruthless pursuit of the ball saw them increase the lead to 14 points.

The final quarter saw our defensive end continue to fight for the ball at every turn, with plenty of positive turnovers for Mavericks. This appeared to be too little too late, as Lightning continued with their onslaught of goals and the match finished at 60-35.

A tough match for Mavericks, with many lessons to be learned. With an eight day gap before their next match against Celtic Dragons, there is plenty of time for the team to regroup and build on the experience. Congratulations to our Goal Keeper Razia Quashie for winning Saracens Mavericks’ Player of the Match.