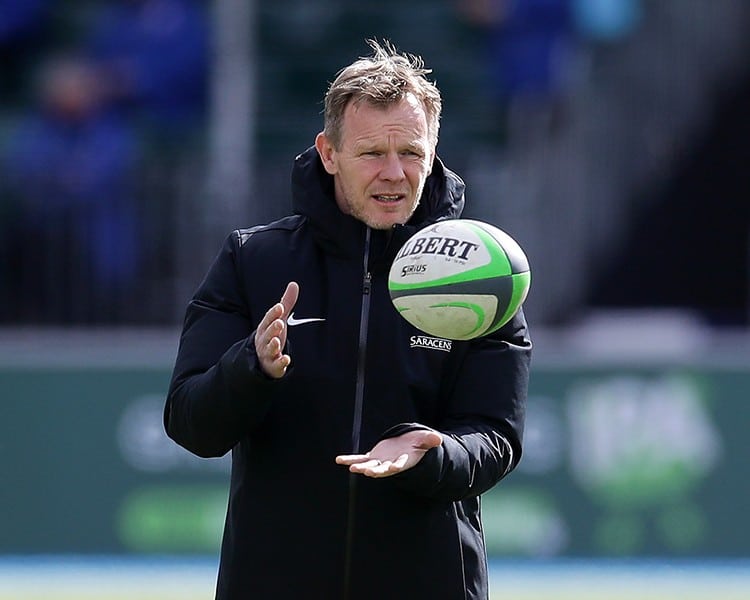 McCall: There was a different mentality from the group

Director of Rugby Mark McCall believes the most encouraging sign from the weekend’s victory actually came from his side’s emotional improvement as much as the increase in intensity.

There were obvious signs of improvement in the bonus-point win; the intensity in both defence and attack a clear reason for a lot of the success the team enjoyed in running in seven tries.

But Sarries didn’t have it all their own way in the opening quarter, going behind to an early penalty and then facing a lot of pressure at scrum time from a confrontational Jersey pack.

“I loved our intensity in defence, there was a real appetite to defend together”

The forwards found a fix though and from then on made sure of dominance at the set-piece, which in turn allowed the backs to enjoy far more of the ball and finish off some clinical rugby.

And McCall insists it is that attitude and ability to respond to setbacks on the field that will mean his side will continue to be successful this season.

“It just felt more like ourselves,” he said. “I think there was a different mentality from the playing group.

“We needed to bounce back and not just to be as physical as we ended up being but emotionally being able to deal with a couple of setbacks early in the game which I thought we did.

“We didn’t have an easy start, our scrum wasn’t great in the first ten or 15 minutes but we didn’t let that dishearten us and some of our defensive sets during that period were fantastic.

“I’m glad that our experienced props were able to find a bit of a fix because we got better and better as the game went on.

“We just grew into the game, we played with a different intensity this week than we played last week and that’s what we want to do all the time.”

The turnaround had begun earlier in the week when the playing group, led by senior players including Jackson Wray, bought in to working hard on the training pitch.

And McCall knows that his squad must continue to build on that positive feeling having experienced for themselves what a proper performance should feel like against Jersey Reds.

“They were phenomenal all week, our senior guys took charge, Jackson Wray was magnificent during the week,” he added.

“It was a realisation that the problems were very fixable, it was a shift in mentality is what we needed.

“We played 10 to 15 per cent below what we would normally expect in terms of our intensity and that includes how we carry, how we get off the line, how we chase kicks, all of those things were sub-par last week and they were good [v Jersey] and we’ve got to build on that.”

“I loved our intensity in defence, there was a real appetite to defend together, get off the line and eventually I think we wore them down and we ran hard at them and scored some nice tries along the way.”