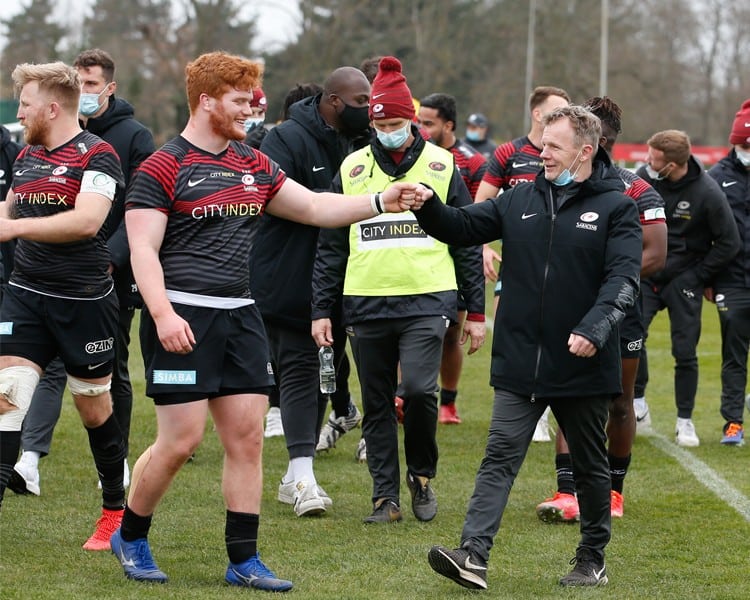 Director of Rugby Mark McCall insists the squad are relishing the chance to build some momentum during the next block of crucial fixtures in the Greene King IPA Championship.

Sarries continued their resurgence on Sunday with a second consecutive bonus-point win that has firmly got the club’s promotion ambitions back on track.

But after both victories the Men in Black have faced a fixtureless weekend, which hasn’t allowed the group to build up as much consistency and confidence just yet.

They return to action though against Bedford Blues next Sunday before key fixtures with front runners Doncaster Knight and Ealing Trailfinders, a period McCall is excited for.

“It’s been really stop start for us so far. We’re looking forward to getting some rhythm into our season,” he said. “We’ve got four really important matches coming up after the break.

“We’ve got Bedford Blues, Doncaster Knights, Ealing Trailfinders and Nottingham. We’ll have the whole squad available for the first time and we chose to include Jamie [today], he did a fantastic job for us. He was outstanding.

“We’re really pleased to get the job done and get what we needed out of the game and move on to the next one.

“Richmond are a proud club and they got absolutely stuck in, they made us fight for 20 minutes to score a fourth try the way they defended on their line and that’s what we’re going to get every week and we know that.

“But it’s up to us to bring a really good attitude to every match and we’ve done that in the last two and we’ve got to continue that.”

Jamie George and Sean Maitland returned to action following their involvement in the Six Nations at the Richmond Athletic Ground, the former putting in a man-of-the-match display.

And McCall revealed the rest of the international contingent are largely to all feature in the next few games in what is a hugely important portion of the season.

“Over the course of the next four games our international contingent will be heavily involved” he added.

“A few of them haven’t played for the club for quite some time, some of them since October so they’ll be in training this week.

“Jamie played an international match last weekend but it shows you what a quality person he is as well as a quality player by coming here, wanting to play, rolling his sleeves up and get stuck in with his teammates and he was probably standout player of the match.”