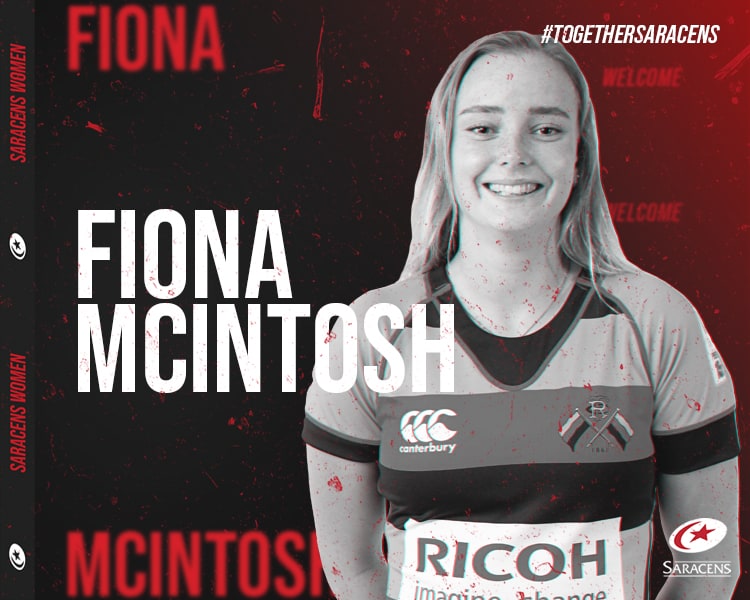 Saracens Women is delighted to announce the signing of Richmond forward Fi McIntosh.

The second row is an exciting young talent who has represented England at Under-20 level and as a high amount of experience in the Premier 15s despite her young age.

As a mini, she began playing at Old Alleynian and moved on to Kent Divas before stopping rugby for three years to concentrate on rowing.

“Coming to Saracens is a great opportunity to challenge and push myself to better develop as a player.”

McIntosh joined the England Talent Development Group whilst at Hartpury College and was named in the 2019/20 England Under-20s squad, a reward for her performances for Richmond in the Premier 15s.

Currently studying Biomedical Science at St George’s University of London, McIntosh is excited to continue her development alongside several experienced players she has looked up to for a long time.

She said: “Coming to Saracens is a great opportunity to challenge and push myself to better develop as a player, especially as I’m surrounded by players of such a high standard.

“Having played from a young age, it’s great to now train alongside players that I looked up to as a young girl. It’s such a great performance environment to be in and I’m really excited to further my rugby career and see what this group can achieve this season.

“Saracens have led the way in the development of women’s rugby so it is an honour to join and become part of this set up.”

Head coach Alex Austerberry said: “Fi is a young player who has been on our radar for some time. An England U20 who has progressed through the pathway, Fi had a series of impressive seasons for Richmond including impressive performances against Saracens.

“A very mobile player with a great capacity to work and a very competent lineout operator, Fi has great hands and has the ability to link play as well as carry hard. Already a proven Prem 15s players, she has the potential to kick on even further and influence the way we play.

“She is a high-quality player with a very exciting future ahead of her and I am glad that is with Saracens.”