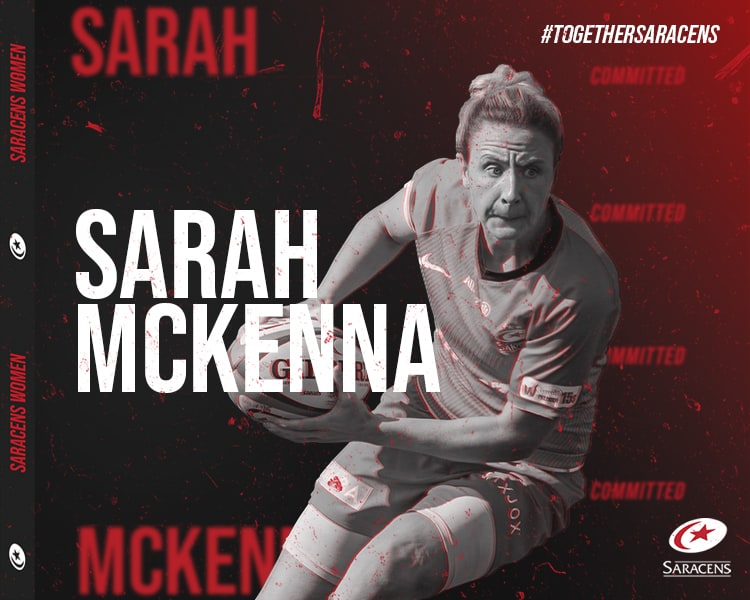 McKenna commits for another year

Saracens Women is delighted to announce England international Sarah McKenna has committed her future to the club.

The full-back has contributed immensely to the Women in Black over two spells, playing a key part in the 2014/15 and 2018/19 domestic successes.

McKenna first picked up a ball aged six at Harpenden and has since featured for Scorpions, Old Albanian and Wasps as well as Sarries.

She made her debut for England at both XVs and Sevens in 2011 and was a regular part of the latter squad for a number of years.

“I’ve been at the club for eight years now and every year I’m find myself enjoying my rugby more and more.”

The 31-year-old made her return to Sarries in the summer of 2018 and was a mainstay in the team for the Premier 15s season. She also started every game of England’s Women’s Six Nations Grand Slam-winning campaign ahead of helping Saracens retain their English title with a 33-17 victory over Harlequins.

Due to her longstanding relationship with the club, McKenna couldn’t see herself playing anywhere else.

“For me signing to Saracens for another year was a no brainer,” she said.

“I’ve been at the club for eight years now and every year I’m find myself enjoying my rugby more and more. It’s a pleasure to be playing alongside some of the best players in the world and in an environment where talent, skill and people are nurtured.

“It’s important to me to be in a progressive team who are pushing boundaries of what can be achieved on the pitch and Saracens are certainly a team who are leading the way in this.”

Head coach Austerberry said: “Another player local to the area, Sarah is an incredibly gifted player who has the skillset and the ability to read games and make things happen that other don’t see.

“As well as her ability to make the exceptional look relatively simple she is a very diligent player and thinks deeply about the game. Her level of consistency and her ability to command the backfield and the skies, stands her out as one of the leading full-backs in rugby.

“I have no doubt that Sarah will make a significant contribution to the club and that she will continue to improve her game which is very exciting for coaches and fans alike.”