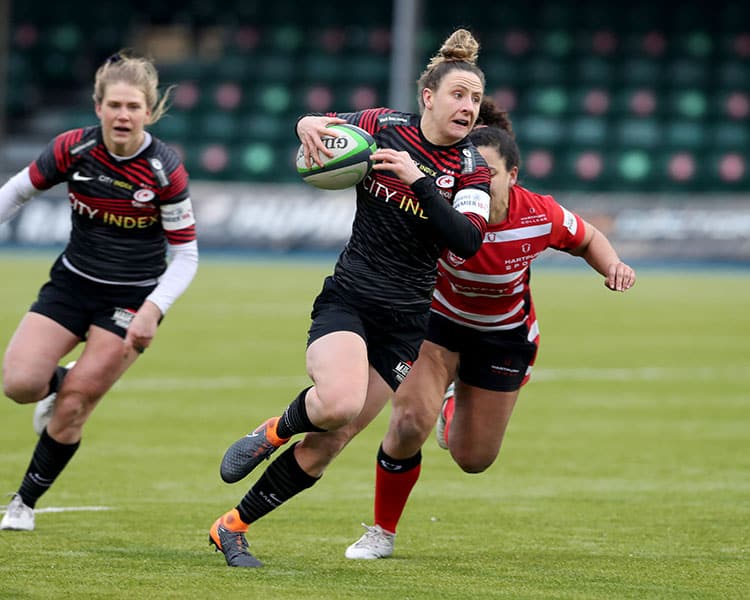 The Women in Black hosted the West Country side and came away victorious through tries from Poppy Cleall (2), Rocky Clark, Lotte Clapp and Deborah Fleming.

However in a tight first half, the aerial battle was key as both sides kicked for territory, and McKenna was crucial in an astute back-three performance.

Alex Austerberry’s side remain top of the Allianz Premier 15s table but the full-back stressed that Gloucester had proved worthy opponents in opening 40.

“We stuck to the processes and then those scores came in the second half.”

She said: “It was very much about our attrition and how long we could stay in the fight, we needed to try and make no additional errors which we were unable to do.

“We made too many errors in that first half when we could have pulled that score up a bit but, in general, we stuck to the processes and then those scores came in the second half.

“We know Gloucester are going to be an incredibly energetic side and that they’d stay in the battle, we weren’t getting through where we have success normally, so it was about building those phases and they put us to the sword for longer than most teams.”

The barrage of kicks from the Cherry & Whites were well defended by a back three of McKenna, Fleming and skipper Clapp.

It was a significant strategic aspect of the game on a freezing day in north London, a fact not lost on McKenna.

“It’s definitely something we’ve been working on as a back three partnership and how we counter attack off those opportunities,” the England international added.

“Gloucester did it very well today and there were some good kicking battles but we know more and more in the Allianz 15s there’s high quality kicking battles and it’s on a knife edge just to who’s going to win that.”

“It’s all about who puts in the best kick the best chase so it’s about linking up all those areas at once.”