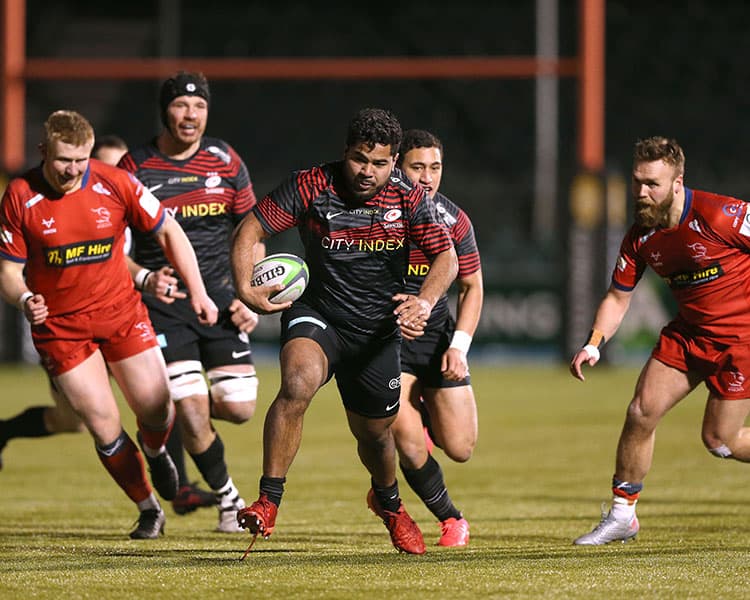 More to come from Sarries – Pifeleti

An improved Saracens Men overcame Doncaster Knights on Saturday, but hooker Kapeli Pifeleti promises there is more to come.

The USA international scored for the third consecutive match running as the Men in Black crossed for five tries against the Yorkshiremen to win 29-10 at StoneX Stadium.

The win followed back-to-back Trailfinders Challenge Cup defeats and Pifeleti insists the final two friendlies with Coventry will stand the squad in good stead ahead of the Championship open at Cornish Pirates.

He said: “We’re very happy with the improvement from the last couple of games against Ealing.

“I think there were certain aspects of that game that were a lot better – our attack, our kick chase, our defence. A big work on for us was discipline. Our discipline against Ealing was very poor and it could have been better, but it was a big improvement.

“We realised that Doncaster were just going to play and don’t kick as much as we do which was good for us as we could bang them and keep doing what we do which is being the Wolfpack and physical in defence.

“There is still a lot of room for improvement and there’s no better way than to do that in these next two games before flying into the season.”

Pifeleti barged his way over late on from what is slowly becoming a trademark move for the Academy graduate.

Instructed by Director of Rugby Mark McCall, he tapped from five metres out and took charge at the line, flopping over with assistance from several Sarries bodies/

“I just tapped the ball, put my head down and I tried to run as hard as I could!” he laughed.

“I was blowing and Smally was the one that was shouting ‘KP, tap the ball!’ so I thought I might as well!”

Become a Wolfpack member for FREE and watch Saracens Men vs Coventry this Saturday!