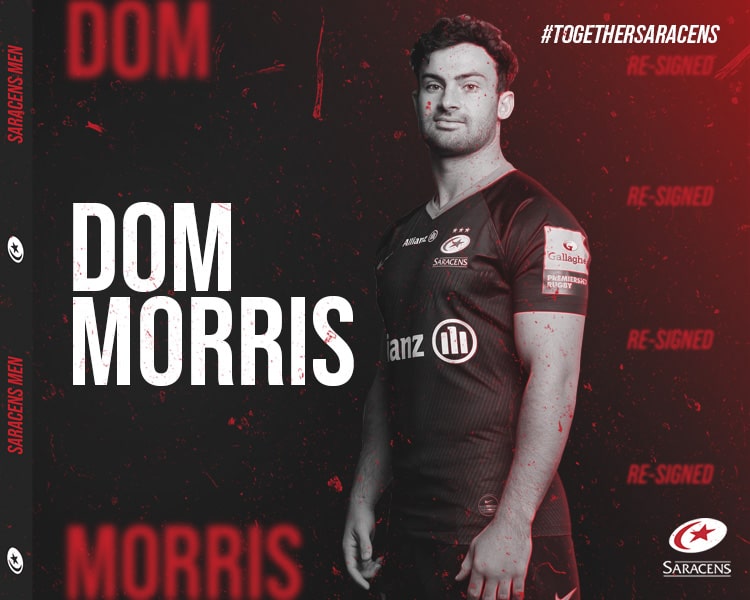 Saracens is delighted to announce Dom Morris has committed his future to the club for another two years.

The Academy graduate has signed fresh terms until the summer of 2022, extending his long association with the Men in Black.

A Sarries supporter from the Vicarage Road days, Morris joined the Academy as a 15-year-old and has progressed through the ages to the senior squad.

He made his first team debut in the 2016/17 Anglo-Welsh Cup against Scarlets and has since earned six Premiership caps, crossing the whitewash four times.

“As a place to learn and grow I don’t think there is anywhere better.”

A powerful centre with the ability to break the gainline, Morris is relishing the opportunity to kick on at Saracens and wants to repay the faith the club has shown in him.

“I’m massively pleased to be staying at Sarries,” the 22-year-old said.

“I’ve had a tough time with injuries, and they’ve stuck with me and been good to me.

“The environment at Sarries makes you grow as a player and person; everyone genuinely cares about you and wants you to get better.

“As a place to learn and grow I don’t think there is anywhere better and I’m looking forward to being part of an exciting journey going forward.”

Director of Rugby Mark McCall said: “Dom is a young player with a very bright future.

“He has had to contend with some frustrating long-term injuries, but we were able to witness some glimpses of his exciting potential in the series of games prior to lockdown.

“Dom will have a big role to play over the next 12 months and we are looking forward to watching him develop and improve his game.”