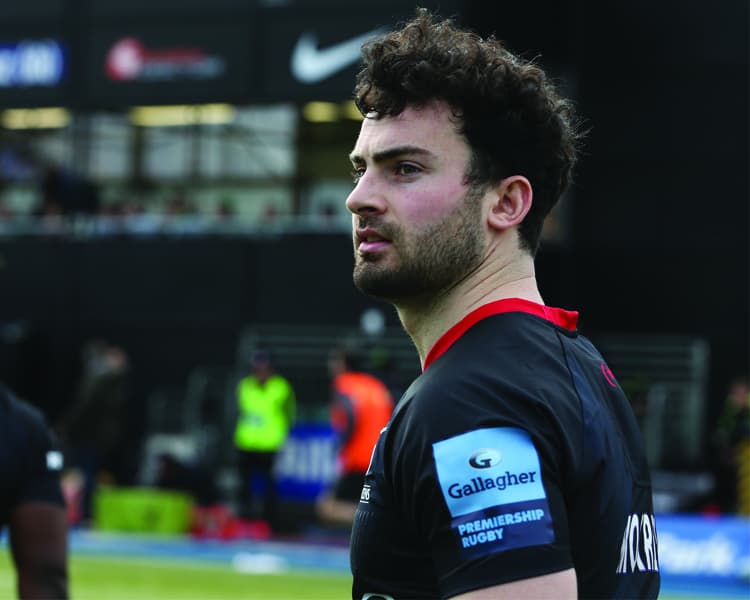 Dom Morris believes the young players at Saracens will benefit greatly from the amount of minutes they will have played at senior level by the end of the 2019/20 campaign.

The centre has featured nine times in the Gallagher Premiership this season, earning five starts, and that will become 10 and six respectively this Sunday when Sarries host Exeter Chiefs.

He forms part of a backline with an average age of 23 and is excited by what the opportunities he is getting.

“For someone like me who needs a bit more game time and exposure in the Prem it’s an awesome experience.”

“For someone like me who needs a bit more game time and exposure in the Prem it’s an awesome experience,” Morris said.

“There’s a lot of young guys coming through and, for the future, it’s massive to get that exposure and experience at the ages we are  getting it.

“It’s unbelievable and hopefully it will pay off in the coming years.”

Morris impressed for Sarries from a wing role on Wednesday night against Sale Sharks and it was his thumping hit in the last minute that led to the Men in Black scoring a converted try at the death to secure a losing bonus point.

The second half saw Mark McCall’s side only concede three points to an experienced Sale side and Morris hopes if the Wolfpack play similarly on Sunday it will end in a positive result.

He said: “We can take a lot of positives from the Sale game, particularly the second half. I thought our defence and kick-chase were awesome.

Looking forward to Exeter this weekend, we’ve got a massive challenge and they’re going well at the moment but if we can bring the same sort of performance we did in that second half then hopefully we can get a good result against them.

“We base our defence on our line speed and we want to be making those physical hits in defence to stop attacks and ultimately get the ball back. I think it’s something we massively work in training and it’s good to see it working in the games.

“We know they’re going to bring a physical presence in defence and attack. They love to keep the ball. We have to remain patient, trust our processes and make sure we do everything we’ve practiced in training in order to come away with a good result.”