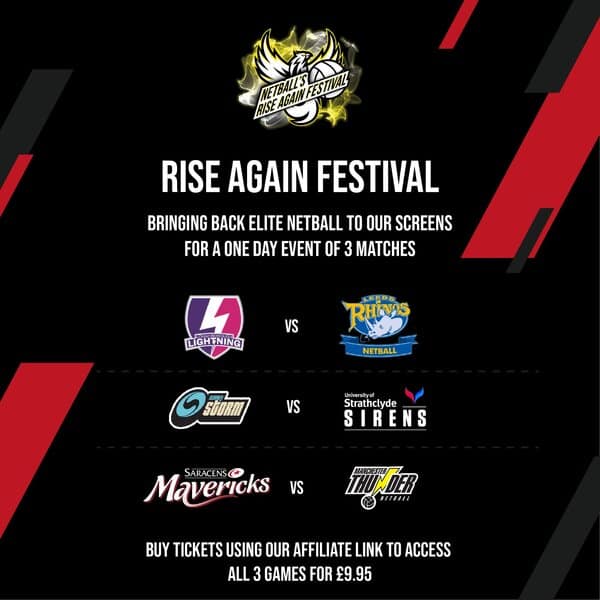 With the Vitality Netball Superleague being cancelled earlier this year, the Rise Again Festival organisers understood that both the netball community and dedicated fans have unfortunately been deprived of elite and amateur netball this year, and wanted to do something to end 2020 in a positive way.

Featuring six of the best netball teams in the country, including Saracens Mavericks, Loughborough Lightning, Leeds Rhinos, Surrey Storm, Strathclyde Sirens and Manchester Thunder, the event will be lived streamed from 11H30 on Saturday 19th December, and will be the first visible match play of UK elite level netball for nine months.

Television and radio presenter Lindsey Chapman, who will be hosting the event, said: “We’re already looking forward to you joining us and showcasing everything that is great about UK netball.”

The first game centre pass starts at 12H00, with Loughborough Lightning and Leeds Rhinos taking to the court. Then, at 14H00, Surrey Storm and Strathclyde Sirens go head to head. The highlight will be at 16H00, when Saracens Mavericks will take on the current VNSL Champions, Manchester Thunder to bring the day to a close in what promises to be an exciting final match.

Saracens Mavericks Head Coach, Kathryn Ratnapala is looking forward to the event for her side, saying “having had such a long break from Superleague, I can’t wait for the opportunity to get our Saracens Mavericks players back on court and give an opportunity for our fans to see our players in action again.”

Tracey Neville MBE quickly recognised the detrimental effects COVID-19 was having on Netball and took matters into her own hands to support netball by creating Neville’s Netball Army saying: “Last month I launched Neville’s Netball Army in a bid to recover the momentum we’d lost as a virtue of the global pandemic, and the response has been overwhelming, with people up and down the country registering their support for reprioritising and recovering women’s sport.

“One of the most interesting findings is that over 95% of people who signed up to the army said that they want to see more live-streamed events, and 85% of these people would pay to watch. This festival has proved to be the perfect opportunity to validate this and as such I’m delighted to be on the game-day commentary team.”

The Rise Again Festival has teamed up with broadcast and production specialists TeleVideo who shoot live UK netball games for Sky, as well as live streaming service Dacast in order to broadcast their matches live on the day, in what promises to be a very enjoyable event.

Live streaming passes can be purchased in advance for £9.95 which will get you over 6 hours of netball entertainment including all 3 live games, and the event can be streamed anywhere in the world.

To purchase your pass, please visit this link to get your passes: