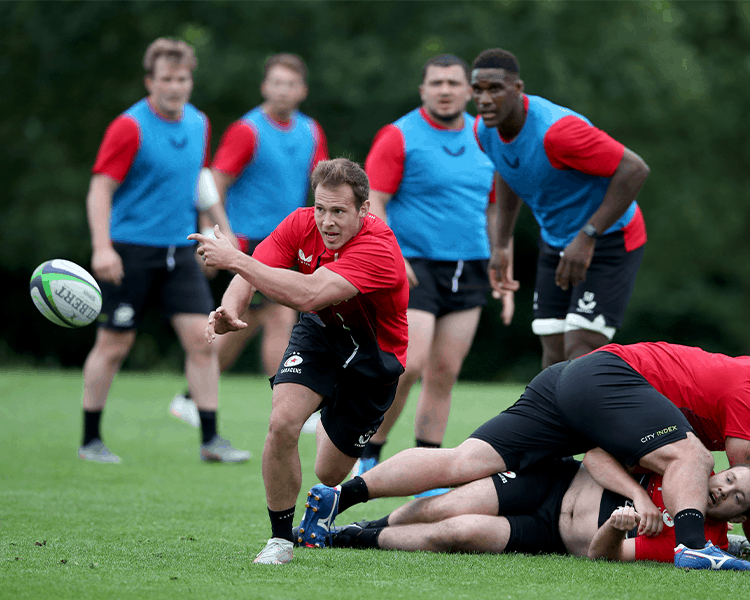 Ivan van Zyl has swapped Pretoria and the Bulls for London and Saracens after arriving earlier this summer, and he has already spoken about how being here at StoneX Stadium is a ‘dream come true’.

The Springboks scrum-half, who has six caps for his country is in his fifth week in his new surroundings, and is already loving being a part of the Sarries family.

“It’s been amazing. Everyone has been so welcoming from all the staff right through to every single player. Everyone is trying to help and make myself and my wife feel comfortable on and off the pitch, they really care which has made it a great experience so far.”

After making the journey over and then having to complete the COVID-19 Quarantine he admitted that the opening training sessions were challenging, but he is starting to show what he can do on the training pitch.

“I’m finding my feet and settling in. The first week was tough after being in quarantine to get up to speed but we’re working very hard. There is a real ability here to turn that switch as soon as we get on the pitch and we know it’s time to work so the intensity is really high.”

Van Zyl, who has been with the Bulls since 2015 took immense pride in playing for the Loftus Versfeld based side, but a meeting with the Saracens coaching staff changed everything for the number nine.

“Firstly, playing for Saracens has always been a dream of mine so to be here is really special. I was still playing at the Bulls but Sarries got in contact and I met with the coaches over Zoom. After that I knew that I wanted to make the move and it happened really quickly which was all pretty surreal.”

With a pre-season double header against Ulster rapidly approaching, the 26-year-old has highlighted them in the diary as a chance to impress his new colleagues.

“I’m really looking forward to it. For us new guys it’s a first opportunity to make a mark in front of the coaches but also to your team mates around you. We know we will have to fight for the jersey but getting in to games is a great chance for us.”

The style of rugby differs significantly from the Southern to Northern hemisphere, but Van Zyl is confident that he can adapt quickly at StoneX Stadium.

“Well the weather isn’t too bad at the moment so that’s a positive! Obviously the conditions will be  different to SA as we don’t get so much rain, but I think there are a couple of differences. In England they tend to kick more off nine and it’s very physical so we’ll need to be as clinical as possible when we get chances.”

With three scrum-halves in the squad who are all internationals there is plenty of competition, which he says is driving standards every day.

“Aled and Ruben are both great guys off the field and incredible players on it. Each one of us has something different but we’re pushing each other every day and that will make us better. I’m loving the competitiveness but it’s in a good spirit, so it’s up to us to grab the opportunity when we get it!”

There is plenty of intrigue about how Saracens will adapt to life back in the top flight, which is something that attracted Van Zyl to the club.

“It’s a really interesting time to join and be a part of the club. Obviously everyone knows about what happened but we’re excited to see what we can do and I’m fortunate to be a part of that. We have a responsibility to perform and we want to show that we still have the quality to get some silverware.”

There are familiar faces for him already at the club, and he also can’t wait for some of the most high-profile players in the game to return from British & Irish Lions duty in the coming months.

“I played with Vinny (Vincent Koch) in 2018 for the Springboks and also Schalk Brits at the Bulls so I know a few faces, and it will just be great to work with everyone else.”

He added: “It’s going to be incredible to play with everyone so I’m really excited for that. To work with players of that quality makes you step up personally and they demand extra from you, so it will be great to work with all of those guys.”

After making his Springboks debut against Wales in 2018 he has had a taste of putting on the famous green jersey, and would like his performances in the Black and Red to allow him another attempt with the World Champions.

“Everyone wants to play international rugby and of course I would love to get back in to it, but for now my biggest focus is at Sarries. If I’m playing well those opportunities may well open again and that would be special, but I’m 100% invested in to the club and want to perform to my best week in week out.”

The number nine has an impressive rugby CV which has arrived with him in North London, and he will be hoping that his debut season at Saracens is one to remember.

WATCH VAN ZYL IN 21/22 WITH A SEASONAL MEMBERSHIP!