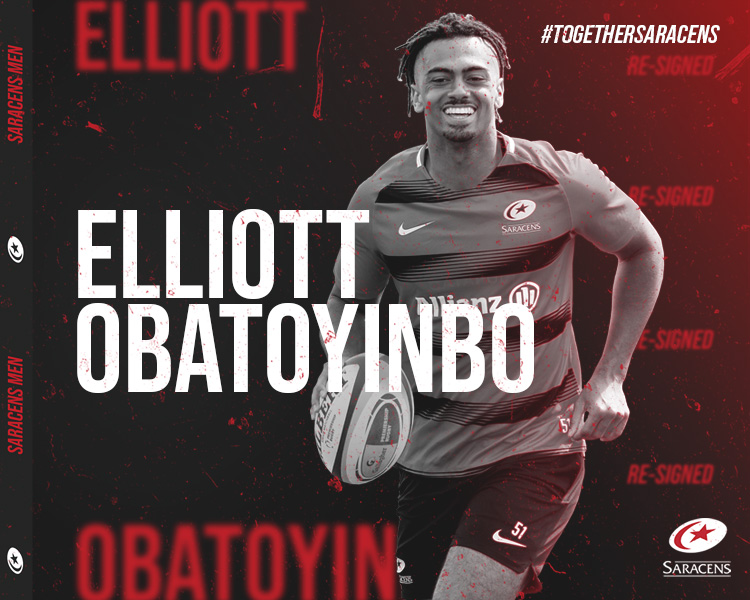 Saracens is pleased to announce Elliott Obatoyinbo has committed his future to the club until 2022.

The 21-year-old has signed a new two-year contract and will graduate from the Senior Academy into the Senior Squad.

A winger who can play full-back, Obatoyinbo spent the summer of 2018 in Wellington and appeared for the Mitre 10 Cup side’s Academy as well as in the local club league.

On his return to north London, the former England youth international spent time with Ampthill in National One and stepped up for game time with London Scottish in the Championship.

“Elliott’s progress over the last 12 months makes us hugely excited about his future.”

He made his senior debut for Saracens in October 2018 and earned a first Heineken Champions Cup outing against Ospreys in January.

Obatoyinbo has made 10 Sarries appearances to date and is grateful to the club’s environment for aiding his development.

“I’m really happy to have signed; there’s nowhere I’d rather be,” he said.

“I know this is the best place for me to develop as a player with the coaches we have and the senior players that we have so I’m really excited.

“I came out of school just kind of relying on talent; rugby is a lot more than that and they’ve really helped me with my game and have been good for me.”

Director of Rugby Mark McCall said: “Elliott’s progress over the last 12 months makes us hugely excited about his future.

“He is very clear on what he wants to achieve and is prepared to make the sacrifices necessary to allow him to do that. His competitive spirit and willingness to learn will be important in helping to accelerate his development.”