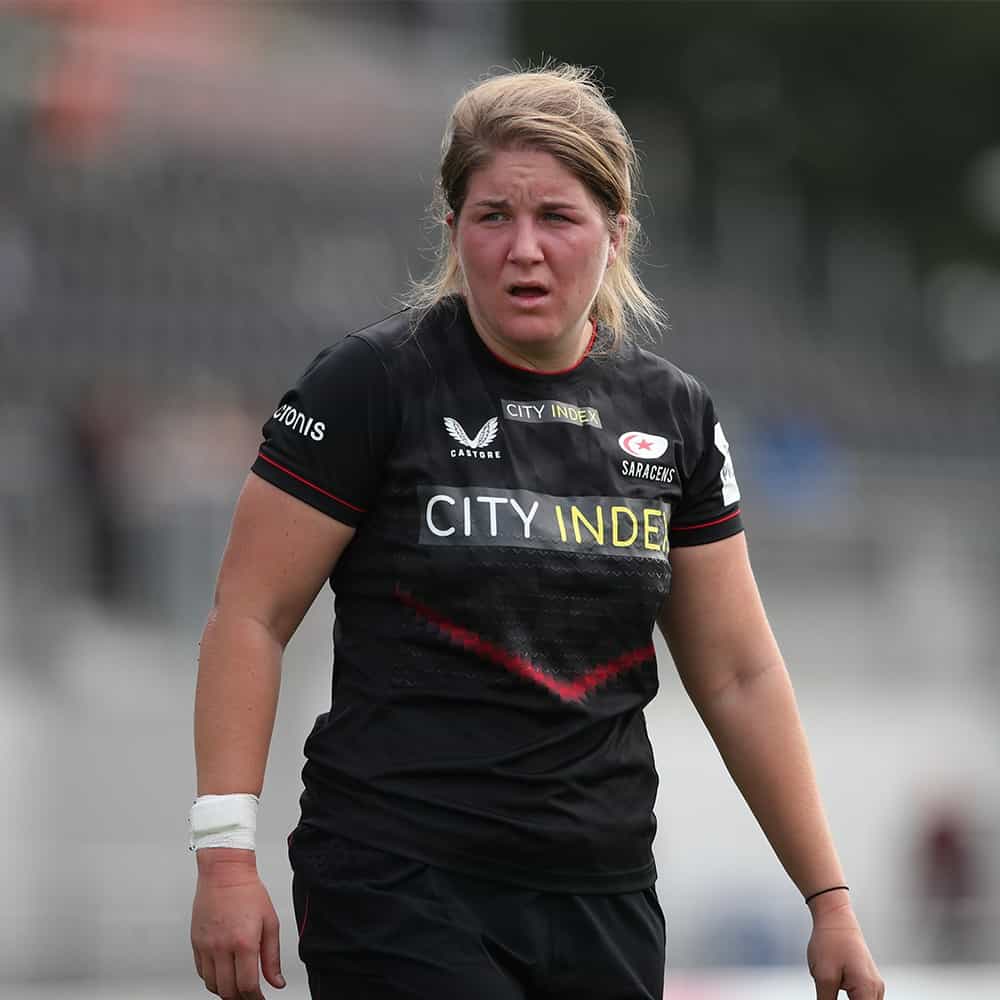 Poppy Cleall celebrated a significant landmark last weekend as she put the Saracens shirt on for the 100th time, and the back-rower is showing no signs of slowing down with lofty aspirations for the coming years.

The 29-year-old has gone from strength to strength in recent years which has put her at the very top of the sport, and despite all of her achievements she was quick to highlight how special reaching a century was at StoneX Stadium.

“It was a brilliant day and all of the girls and coaches made it really memorable for me so I just want to say a massive thank you to everyone. It was nice to get such a good win as well to really cap it off for everyone.” Said Cleall.

“Personally I want to be consistently performing at the highest level and help to put the girls on the front foot.”

With Wasps, DMP Sharks and Loughborough in the first three matches it was never going to be an easy start to the season, but the Women in Black have registered maximum points which means they sit joint at the top of the table as the first block of matches comes to a close.

“The first three fixtures were very difficult so to come away with three bonus point wins is massive for us. It’s a long season and there will be big challenges ahead but we have managed to start in a really positive way.”

Despite the positive start, the 2021 Six Nations Player of the Tournament is looking for her team to keep making strides forward in the coming weeks.

“We’re always looking for an 80 minute performance but we haven’t managed it yet, the first half against Loughborough was very strong but we’re aware that nothing gets won early in the season so there is plenty of time for us to improve.

“Personally I want to be consistently performing at the highest level and help to put the girls on the front foot.”

When asked about the aims for the North Londoners this season it was clear to Cleall what Sarries are looking to achieve, and admitted that the end to the 2020/21 campaign has given the squad a bigger urge to succeed.

“I’d say we’re as motivated as ever. We’re definitely not looking back but we’re looking to use the lessons that we learnt to push us forward and make sure we’re where we want to be at the end of the season.”

Looking ahead to what is a huge year for the women’s game globally with the World Cup next October in New Zealand, the leading all-time Premiership try-scorer sees the next 12 months as a great opportunity for the game to grab the limelight.

“It’s going to be huge for the growth of the sport. To have a major tournament will be another chance for us to put it on a platform and with the crowds back it should be amazing.

“In the short term as well, playing against New Zealand twice in November will be massive with the top two in the world facing off. It’s a huge set of fixtures so hopefully if I keep my form up for Sarries I can be involved in those which will be amazing.”

A number of International stars who will be on show at the tournament arrived in North London this summer after signing for Alex Austerberry’s side, and Cleall says they have made a significant difference already.

“We’ve added some real experience with Janna and Carly who are top class players from USA and Canadas, and also Ella who has returned has developed her game hugely and has played very well in the first few games. It’s great to have new talent in the squad as it pushes us all to get better.”

The main difference between this season and last is clear to everyone as turnstiles across the country re-open, something that has massively excited the versatile forward.

“It’s so good to have supporters back. Their noise really makes the world of difference and it was incredible to run out at StoneX last week and see all of them there cheering us on so we’re hugely grateful for the support that we get, week in week out.”

Looking back over the last 100 matches there have been plenty of memorable moments for Cleall, but there is one that stands head and shoulders above the rest.

“It would have to be the final at Northampton to make it back to back Premiership titles. We were at the very top of our game and to be crowned champions twice in a row was such a special feeling!”

Cleall’s form has been nothing short of spectacular in recent years, and if it continues there may well be more trophies heading her way in both club and country colours.