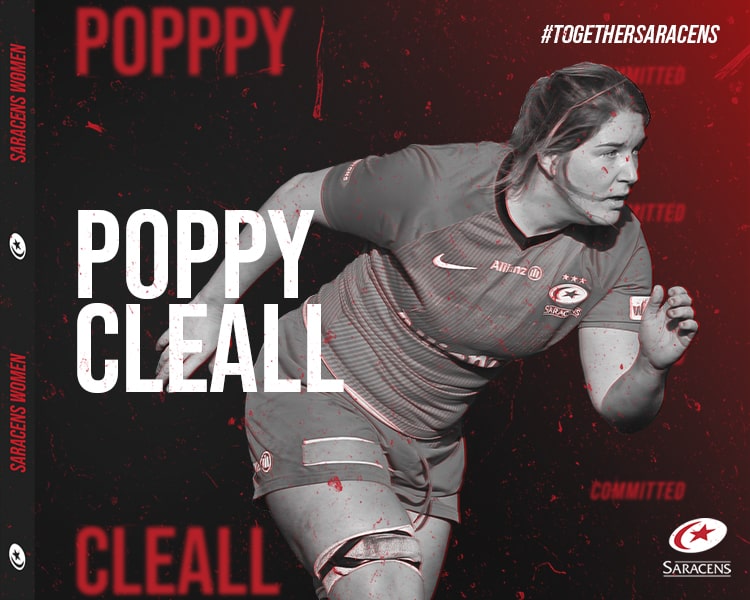 Saracens Women and England international Poppy Cleall has committed herself to the club.

Originally joining the Londoners in 2012, the 28-year-old spent four seasons at Allianz Park, amassing more than 50 appearances, and was part of the Women in Black’s Premiership and Cup double-winning squad as well as being nominated for the league’s Player of the Year award in 2016.

Poppy scored 12 tries for Saracens in the 2018/19 season from Number 8 and has been central part of the squad for a prolonged period.

After a spell with Bristol Bears whilst studying at the University of West of England, Cleall returned to Sarries with England caps in tow and was a key player in the team’s back-to-back Premier 15s successes, earning player of the match in the 2019 final.

Cleall has over 40 England caps and contributed immensely during the Red Roses’ 2017 and 2019 Six Nations Grand Slam campaigns.

She scored 12 tries for Saracens in the 2018/19 season from Number 8 and has been central part of the squad for a prolonged period.

“Signing for my seventh year at Sarries is something I’m very honoured to do,” Cleall said.

“It’s a club that always strives to be the best and push women’s rugby forward. I’m hoping we can continue to do this and help pave the way for future Saracens players.”

Head coach Alex Austerberry said: “Poppy is an outstanding talent and has had a talismanic impact for us as a side. Since joining the club in 2012/13, she has developed into a high-quality player who has a huge impact on games and the people around her.

“Her performances in a Saracens shirt have led to 40 Red Rose caps and I have no doubt that she will again drive her game and our performances forward. Poppy has the opportunity to transcend into world class and to have someone like that wearing a Saracens shirt for a seventh season is great for everyone involved at the club.”