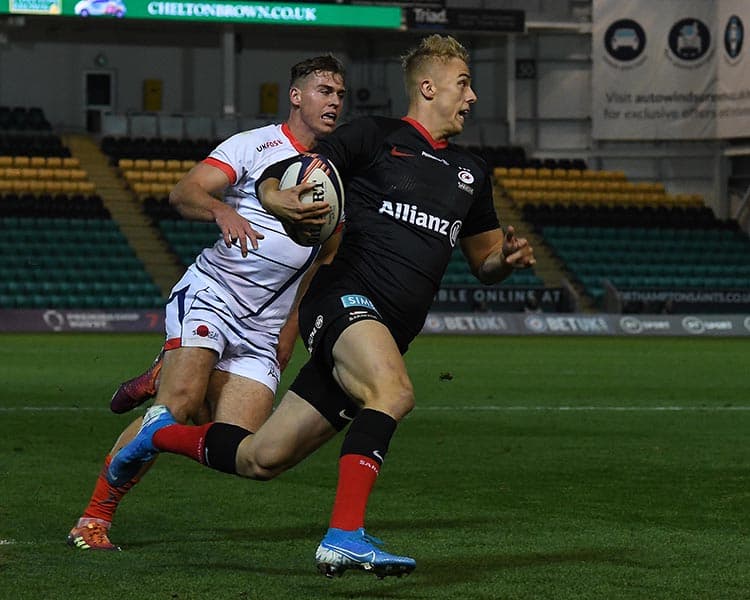 Saracens topped Pool A at the Premiership 7s to secure their place as third seeds for the quarter-finals.

The Men in Black put Sale Sharks and Worcester Warriors to the sword on Friday night to set up a last-eight clash with London Irish.

Adam Powell’s side faced Sale in the opener and got off to a flyer when summer recruit Alex Day spotted space on the right and dropped a delightful kick for Rotimi Segun to run on to and score.

“It was very good to put the shirt on for the first time. It’s obviously a different format but the importance is still there.” – Alex Day

Day was involved in defensive duties from the restart denying Raffie Quirke a trot under the sticks with a cover tackle before Elliott Obatoyinbo skipped through to double Sarries’ advantage.

Captain Tom Whiteley converted to make it 12-0 but scores either side of the interval from Tom Roebuck and Tom Curtis allowed the Sharks to draw level.

However, the contest was ended in quick fashion as replacement Ali Crossdale showcased his raw speed to dot down twice for a 22-12 victory.

Saracens had to wait just over an hour before their next match – the pool decider against Worcester.

Crossdale earned a start and his last-ditch defence denied Warriors on the 22 and the winger almost crept into the corner only to be thwarted by a high challenge.

The Academy graduate did cross for the first try of the game shortly afterwards though but, as in the first encounter, the opposition grabbed a first-half consolation via Joel Medcraft.

The Sixways outfit edged ahead when Alex Hearle spotted a gap to dive under the sticks. Their lead was short-lived as Segun was introduced and dazzled his man to sprint home.

He added his second from the restart. A superb Tobias Munday leap regained possession and a cute grubber from Obatoyinbo sat up kindly for Segun to trot in.

Whiteley came on to wrap the game up with a successful quick tap and go to make it 28-12, setting up a showdown against Irish at 15H15 on the second day.