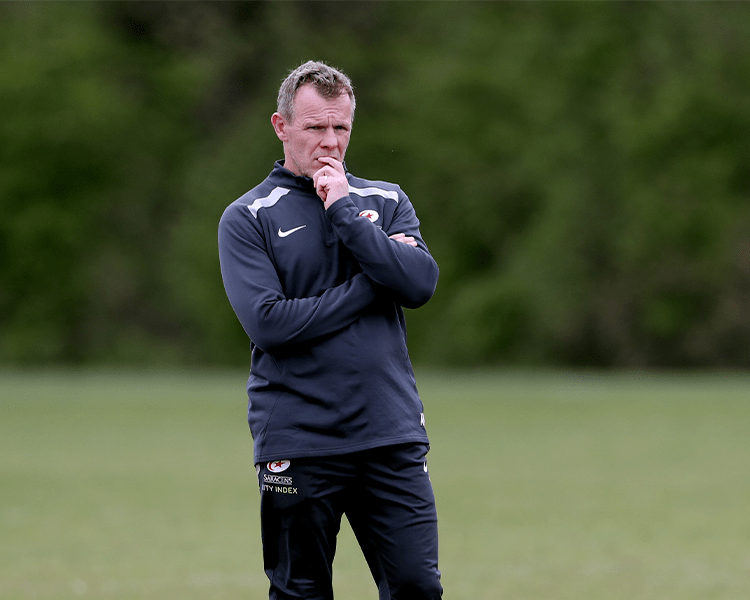 Director of Rugby Mark McCall faced the press ahead of Sunday’s first leg of the Championship Play-Off Final, and is aware of the challenge his side face against Ealing Trailfinders over the next fortnight.

Could you assess how big this occasion is for the club?

The scale of the game is huge. It’s felt very different this week but it’s something this group have been used to and there is a great atmosphere with a lot of excitement around.

Is this the game that you’ve been waiting for all season?

Yes. It’s been a year that has had a bit of everything but we arrive at this point with two games to win and the opportunity to get back in to the Premiership, which is what we wanted.

If someone had offered you this position would you have taken it?

Well it was a long wait between our last Premiership game in October and our first Championship match in March but when we look back it has been a really enjoyable season and we’re entering the finals in good spirits.

Does the squad have to keep their feet on the ground ahead of these matches?

The preparation that we’ve done is like for any big game. Ealing are a team that we respect a lot for obvious reasons. They beat us a couple of times in some friendlies so we know how good a side that are, and we’re aware of the challenge.

What are the main positives that have come out of this season?

So much has happened over the last 20 months, and no-one had a crystal ball so it is great to see the position we are in. I’m most proud of the level of loyalty and unity shown, it has been a real test for us.

The loyalty shown, does that mean that this could mean as much as winning any of your other trophies?

When the relegation was confirmed anything could have happened. A lot of guys came back in after a tough Six Nations but everyone has rolled their sleeves up and enjoyed it. They’ve been phenomenal, the level of care gets tested when something bad happens, but it shows how real all of the friendships are.

With this final being two-legged, how does that change things?

It means that absolutely everything matters, every point counts. It’s a little bit similar to the back-to-back European games that we have had when you play the same team twice in a row, but we’re going to put everything in to the first game.

What threats do Ealing pose?

Ben Ward has done an unbelievable job there and they are ready to go to the Premiership. You don’t want to let them in your 22 as they can do some real damage. They have experienced half-backs and a strong set piece, so we know we are in for a stern challenge.