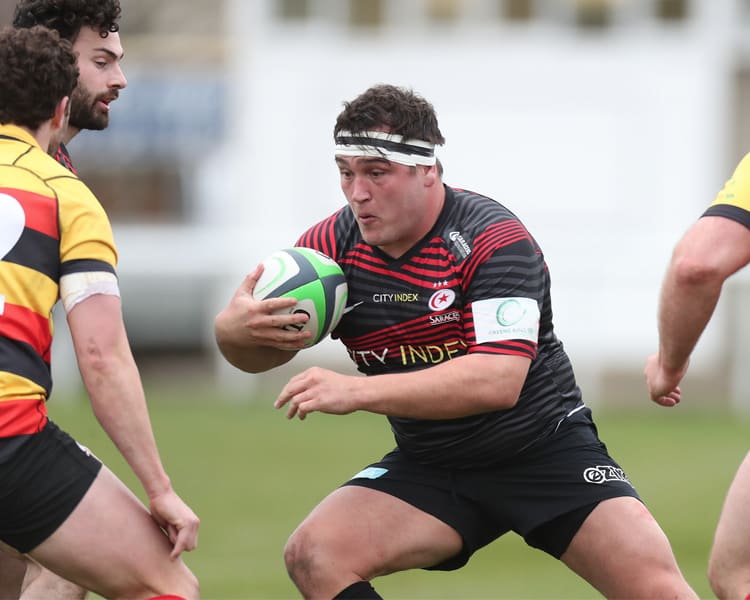 Jamie George marked his return to the side with a try as Saracens Men stayed patient before leaving the Richmond Athletic Ground with a bonus-point win.

The hooker got the crucial opening score before Callum Hunter-Hill, Rotimi Segun, Andy Christie and Ralph Adams-Hale got in on the action.

Richmond were particularly determined in defence, stifling the Sarries attack close to the line on several occasions, but rarely threatened to cross for a score of their own.

The hosts did take an early lead as a breathless opening passage of play saw Saracens defending for almost three minutes before conceding a penalty that Ted Landray slotted.

The Saracens scrum looked dominant in the opening 20 minutes but they were relatively untidy elsewhere and struggled to gain a foothold in the game.

Manu Vunipola got Sarries on the board on 25 minutes after another dominant scrum had earned a penalty and it wasn’t long before the Men in Black had their first score.

George hit his man in the line-out before joining the back of the maul and steering his way over the line as the Sarries pack flexed its muscle.

The first incisive bit of play came five minutes before half-time as a powerful Segun run opened up space for Jackson Wray to cut through the Richmond defence a phase later.

The No.8 made 30 metres before he was brought down just before the line before Luc Jones conceded a penalty and was shown a yellow card for deliberately slowing the ball down.

From the resulting line-out it was Hunter-Hill who gathered, pivoted and touched down for Sarries’ second score and some breathing space before the break.

Vunipola’s conversion was good and a 15-3 lead was probably reflective of the strength Saracens had shown in defence and then when called upon in attack during the first half.

There was no let up early in the second half as Sarries dominated possession and territory, which ultimately led to a lovely first-phase score for Segun on 48 minutes.

A solid scrum smack in the centre of Richmond’s half allowed Aled Davies time to feed Vunipola, who found Dom Morris and the centre straightened before putting Segun away.

Mark McCall’s men spent roughly 12 minutes banging at the door in the Richmond 22, during which the ball was turned over from a line-out and they were also held up.

But a bit of intent from Christie saw the replacement burst through a tackle on 66 minutes, step the last defender and put the ball down for the fourth score.

There was time for one more as Adams-Hale, stepping up his return to competitive action following a lengthy lay-off, inched over from a classic forwards shove.

There may have been time for a sixth – Sarries winning a penalty on the 22 with the clock in the red – but Duncan Taylor knocked the ball on attempting a quick tap!

Another weekend off lies ahead – the Championship shutting down over Easter – but then the group will welcome Bedford Blues to StoneX Stadium on April 11.