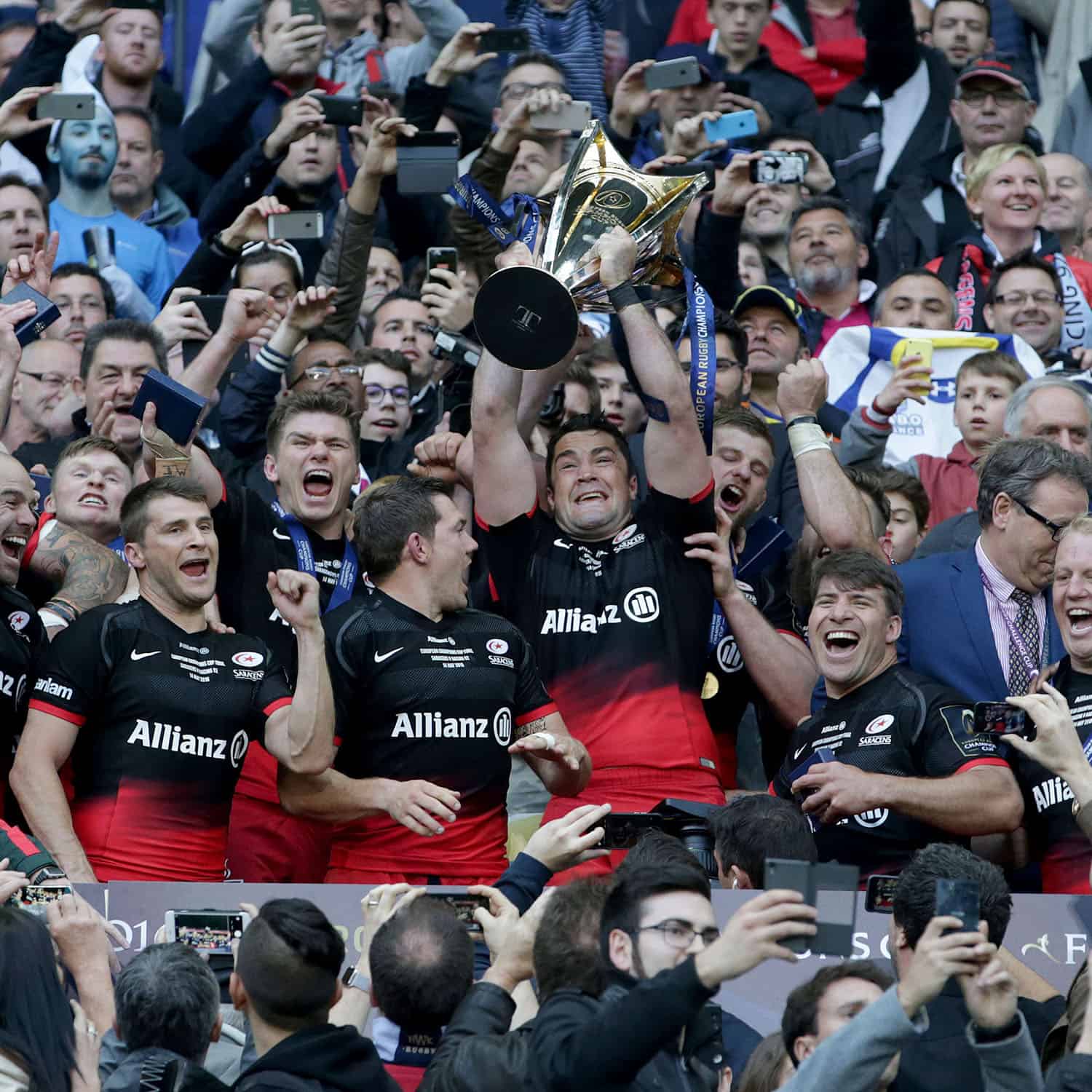 Saracens became champions of Europe for the first time as they ground out victory in the rain against Racing 92 in the Champions Cup final in Lyon.

Parisians Racing had Dan Carter at 10, but he was unable to take kicks at goal and went off injured after 42 minutes.

Sarries dominated the second half and three more Farrell penalties ensured the title was heading back to London.

Saracens also became the first team in the competition’s history to win all nine games in the tournament on their way to becoming champions.

The match was played in torrential rain in the first half and, although conditions eased after the break, the sodden pitch and greasy ball made handling a hazardous occupation.

It meant the side who made fewer mistakes, whose pack got on top and who played the game in the right areas of the park were always going to be the likely winners, and Saracens, beaten finalists two years ago, duly delivered this time round.

The north Londoners are the reigning English champions and they host Leicester next weekend in the Premiership semi-finals with a view to once again reaching the final this season and giving themselves the chance to add more silverware to the groaning shelves in their trophy cabinet.

The script could not have been better for Saracens, who have built their game around a territory and power-based style that was ideal for the conditions in the east of France.

The reigning English champions have broadened their approach this season but, with the rain hammering down and Racing looking to play a game based on power around the fringes, Saracens were happy to hammer them backwards in defence, pin them deep through the boots of Farrell and scrum-half Richard Wigglesworth, and profit from the French side’s numerous mistakes.

Up front, England second rows Maro Itoje – still only 21 – and George Kruis continued their fine form this season and, with the whole pack refusing to give an inch, the front row won three penalties at scrum-time to help Farrell take them into a six-point lead at the break.

After guiding New Zealand to the World Cup last year Carter, 34, was looking to add European champion to his long list of accomplishments, but he was carrying a knee injury going into the game and struggled to make his mark.

With the leading points scorer in Test history unable to kick, it was left to Maxime Machenaud and Goosen to build Racing’s score.

France scrum-half Machenaud missed an early penalty attempt and when he was forced off in the first half, to be joined immediately after the break by Carter, Racing’s brains trust was on the bench, something that was no doubt a factor as they struggled to get a foothold in the game for long periods of the second half.

A lively 15-minute spell after the hour mark did give Goosen the chance to land his third kick and get them back within six points, but they never looked like winning.

With Farrell’s pack gaining the upper hand for long periods and his opposite number hobbled by injury, it was the young apprentice who was the stand-out fly-half in Lyon.

Four nerveless penalties in the first half gave Saracens control on the scoreboard and the England 10’s laser-guided boot landed three more after the interval to punish Racing’s mistakes.

It may not have been pretty, but with Saracens having set out several years ago to become the most ruthless, focused and dogged team around, Saturday’s victory was apt testimony to the character that has taken them from a team playing in a north London park to champions of Europe over the past two decades.