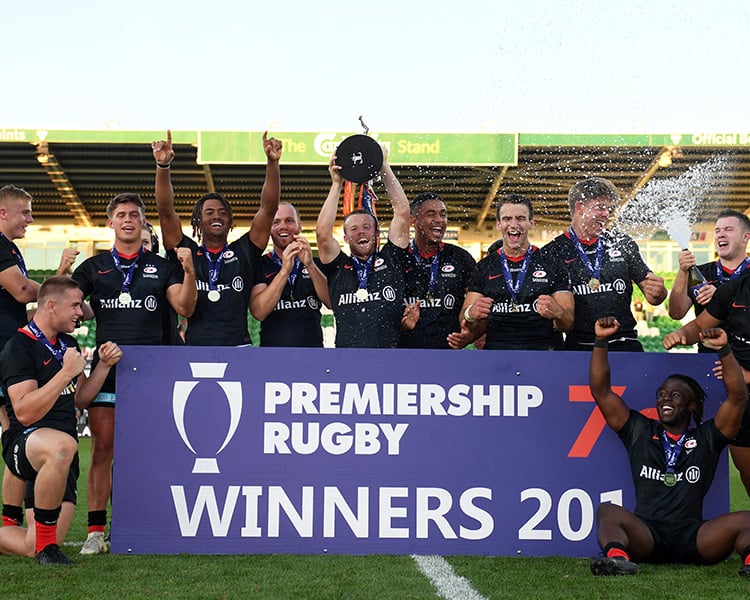 Saracens retained their Premiership 7s crown, coming from behind to defeat Wasps 35-19 at Franklin’s Gardens.

The Men in Black crossed the whitewash six times in a repeat of last year’s final, cancelling out two early scores from Wasps who scored a consolation in the second period.

Adam Powell’s side began the day against London Irish in the quarter-finals with winger Rotimi Segun getting the ball rolling by running in from his own 22.

Academy back rower Andy Christie displayed sublime footwork and acceleration to beat his man on the outside to dot down before Femi Sofolarin replied for Irish on the stroke of half-time.

The Reading-based outfit went ahead when Phil Cokanasiga scuttled over but captain Tom Whiteley and Charlie Watson ensured victory and progression to the last four.

Exeter Chiefs provided the opposition and despite having a large amount of possession in the opening few minutes, they were frustrated by brilliant Sarries defending – defence so good it managed to keep them to nil for the duration of the match.

In attack, Saracens were potent. Elliott Obatoyinbo danced in and Sean Reffell’s hard work was also rewarded with a score.

Crossdale got in on the act, as did Tobias Munday, and Whiteley finished things off courtesy of Josh Hallett’s delicate hands.

So on to the final and it ended up being a case of déjà vu as the Wolfpack downed Wasps for a second successive tournament.

Will Porter and Jacob Umaga both grabbed tries as Wasps came out the blocks intent on avenging their 2018 loss, but Saracens hit back; Crossdale, Whiteley and Christie all scoring to make it 21-12 at the break.

Christie added his second of the game soon after the restart to increase his side’s advantage, before Callum Sirker closed the gap with a solo effort from his own half.

Saracens would not be denied, however, and Reffell punctured a hole in the Wasps’ defence before sending Charlie Watson over to seal back-to-back 7s title.