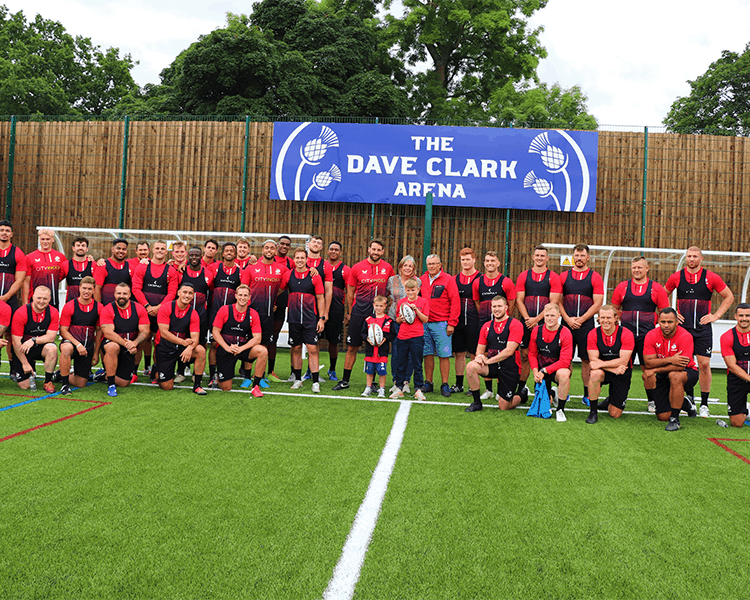 Saracens took a trip to North Yorkshire last week to the Richmond School for a very special visit.

The entire squad attended the School to open The Dave Clark Arena, a brand new sporting facility in his memory after the Deputy Headteacher tragically passed away last year.

The players took part in a training session there to officially open it as they took in new surroundings with the season drawing ever closer, and before that the players coached 35 students from the local schools and Richmondshire Rugby Club with a focus on team building and encouraging the students to enjoy the game of rugby.

Calum Clark, who retired at the end of the season organised the visit on a memorable day for his family who were in attendance at the School.

Clark has recently started his new role of Wellbeing and Personal Development Manager after making 57 appearances for the club, and he spoke of his immense gratitude to the club for making the visit possible.

“It meant a huge amount to me and speaks volumes of the club and the culture here. It shows the real togetherness that we have and how much we support each other in our lives on and off the pitch.” Said the former England international.

Explaining more regarding the visit, Clark spoke about the main reason behind it.

“My Dad had been a teacher here for 23 years and spent a lot of time getting this new facility built, it was his pride and joy in some ways.

“The school then named the pitch after him so to do a session on the field was amazing and he would have been immensely proud of it. The club have truly gone out of their way and it’s a fantastic gesture which I’m very grateful for.”

Alex Lozowski said the players were honoured to make the trip.

“It was a special privilege to go along with CC and train on the pitch named after his dad. It meant a lot to us all to be able to show our support. The legacy Dave Clark left behind was clear for us all to see and is absolutely inspiring for us as a group.”