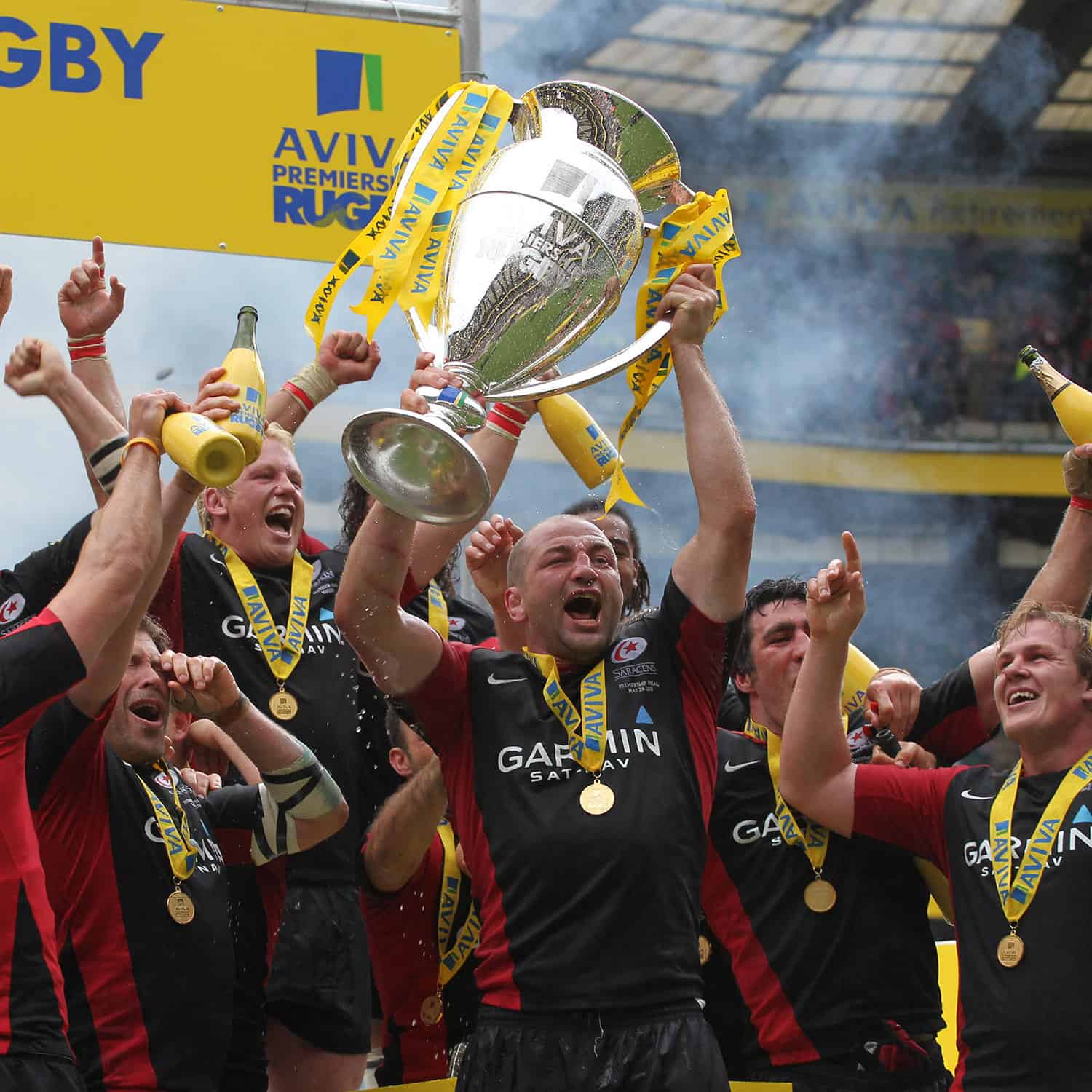 Saracens survived a Leicester onslaught in a riveting finale at Twickenham to win their first ever Premiership title.

Tigers, four points down, went through 32 phases before winning a penalty six minutes into injury-time, but Sarries then won one of their own to prevail.

His fourth put Sarries 19-9 up but two more from Toby Flood, either side of a fifth from Farrell, saw a nervy finish.

For a game that climaxed in one of the most nailbiting endings ever seen in a Premiership final it started rather timidly, as both teams opted to sound each other out through the boot.

But it came alive on four minutes when a searing break by Schalk Brits put Neil de Kock into space and almost took him to the line.

When the ball did not emerge from the resulting ruck referee Wayne Barnes pulled Ben Youngs aside and sent the England number nine to the sin-bin for killing the ball.

With fewer than five minutes gone Tigers were a man down and three points behind when Farrell landed the resulting penalty from the 22.

With centre Anthony Allen deputising at scrum-half Tigers went on the offensive and a huge up and under from Flood, brilliantly gathered by Matt Smith, put them on the front foot.

Alesana Tuilagi and Martin Castrogiovanni made some hard yards into the Sarries 22 before Tigers won a penalty, which Flood converted to make it 3-3 with 10 minutes on the clock.

But the restart was a horror show for Tigers as Allen threw a wild pass above Flood’s head. The England man lost control of the ball before Allen just managed to ground it with Sarries’ pack bearing down.

An early engagement from the five-metre scrum allowed Tigers off the hook and Flood cleared their lines.

Youngs returned with quarter of an hour gone but Tigers were struggling to find their stride before they won a penalty 40m out, which Flood converted to make it 6-3 on 18 minutes.

Leicester were in front on the scoreboard but it was the men in black who were playing the better rugby as their expansive game seemed to catch the Tigers by surprise.

Man of the match Brits was a constant thorn in the Tigers’ side, running superb lines from all over the pitch.

Farrell pulled Saracens level at 6-6 a quarter of the way through the game with a penalty in front of the posts.

The intensity was immense and the only try of the game came on 29 minutes when Brits, who was sensational all afternoon, fixed his defender and fed Short, who shrugged off Hamilton’s desperate tackle to touch down in the left corner.

Referee Barnes went to the video official to confirm the try and Farrell landed the touchline conversion to put Sarries 13-6 in front.

Saracens continued to counter-attack but when Tigers worked the phases, looking to their strike runners, the door was continually slammed in their face by fantastic defending.

Ernst Joubert’s pick from number eight and De Kock’s break down the right saw Tigers offside at the ruck and when Farrell landed the kick from in front of the posts it was 16-6 to the challengers with half-time approaching.

Flood pulled his side back to within one score when Saracens dropped a scrum 25m out to make it 16-9 at the interval.

Farrell gave Sarries the perfect start to the second half when he converted a 35m penalty after Matt Stevens outscrummaged Castrogiovanni, the teenage stand-off restoring his side’s 10-point lead.

Tigers adopted a kick-chase tactic to gain ground and earned a penalty when David Strettle was caught trying to run out of defence. Flood landed the kick to make it 19-12.

Thomas Waldrom came on to replace Jordan Crane, with Crane then returning after what turned out to be a blood injury in place of Craig Newby, in Leicester’s back row.

And, as decided before the match, Richard Wigglesworth replaced De Kock as the Saracens scrum-half with 50 minutes gone.

Saracens also brought on Rhys Gill for Stevens and he went straight into a scrum which collapsed, but Flood put the resulting penalty left of the posts.

The England number 10 had another shot minutes later from almost the same spot, but the result was the same as it again went to the left of the uprights.

The two missed kicks could have pulled Tigers to within a single point but Sarries retained their seven-point lead.

The champions went on the attack but faced claustrophobic defence as they went narrow and then wide but with no joy.

Dan Cole replaced Castrogiovanni for Tigers but although Leicester put together numerous phases Sarries chased, harried and hunted down their prey like a pack of wild dogs.

Leicester’s break finally came with 12 minutes remaining when Hugh Vyvyan, on for Mouritz Botha, went off his feet and Flood landed the penalty to bring Tigers within four points at 19-15.

Brits again set up a fine attack for Saracens, stepping one defender and breaking two tackles before the ball was worked out left, only for Horacio Agulla snuff out the danger.

Poor clearance kicks by Flood and Scott Hamilton found Alex Goode inside his 22 but his brilliant kick out of hand put Tigers back on their five-metre line, just as they were threatening to make a breakthrough.

Tigers again could not clear their lines effectively and after Short ran the ball back, Leicester hands in the ruck gave Farrell a kick four metres from the left touchline with seven minutes left, and the young man showed huge maturity to land his kick.

It took the score to 22-15 to Saracens and the stadium erupted as their fans sensed victory was in their grasp.

But Flood landed a penalty from 40m just after the restart to make it 22-18 with six minutes remaining.

Leicester forged a superb passage of play and worked an overlap for Tuilagi on halfway as the clock ran down but after breaking three tackles the huge Samoan was scragged by Brits.

Then came the breathtaking finale, after a collapsed scrum gave Leicester a penalty with a minute to go.

It saw Tigers revert to type as they launched a catch and drive from the five-metre line-out. They put countless phases together as they edged like a lava flow towards Saracens’ line, but the Londoners would not give any quarter and defended like men possessed.

Leicester were eventually forced wide, unsuccessfully, but six minutes into time added on referee Barnes awarded a penalty to Tigers for hands in the ruck.

Needing a try to win, Crane tapped the ball and charged headlong into a wall of black and red.

Sarries were awarded a penalty at the ensuing ruck as they held on to claim a deserved and hard-fought victory, and with it their first ever English championship.