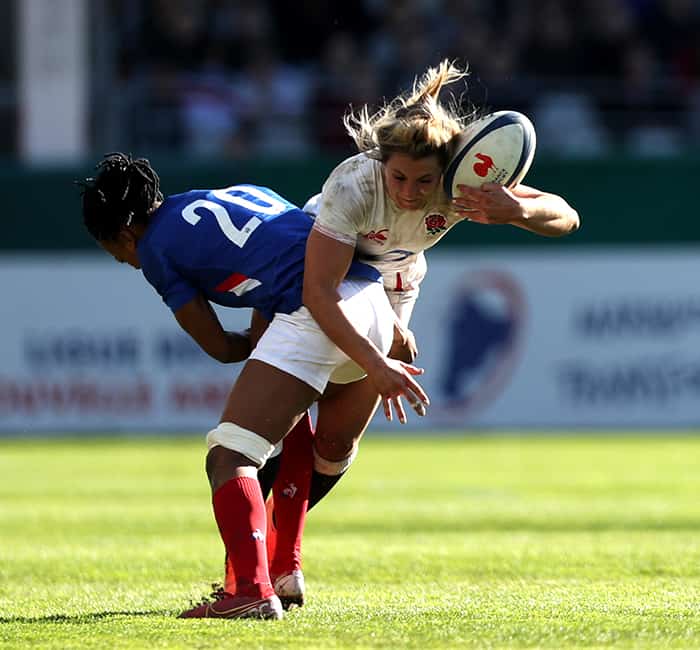 Vicky Fleetwood scored one of England’s tries as the Red Roses opened their 2020 Women’s Six Nations campaign with a 19 – 13 win over France in Pau (Sunday 2 February).

The flanker was one of the five Saracens Women in the England starting XV alongside Hannah Botterman, Poppy Cleall, Zoe Harrison and Sarah McKenna.

Fleetwood’s try came after an early period of dominance from the visitors as she finished off a powerful driving maul, with Emily Scarratt’s conversion pushing the lead out to 12 – 0

Abby Dow had opened the scoring for England after Harrison and McKenna had helped create space for the right winger to finish in the corner.

Watch your Saracens Women stars in action at The Duel! Get your tickets now!

France came back well though with a converted try for scrum-half Sansus and a penalty by Tremouliere narrowing the gap to just 12 – 10 by half-time.

The current Grand Slam champions spent most of the second half defending in their own half and 22 before Scarratt raced in under the posts after taking Amber Reed’s offload in midfield.

A second conversion pushed the score out to 19 – 10 with a late Tremouliere penalty ensuring France came away with a losing bonus point.