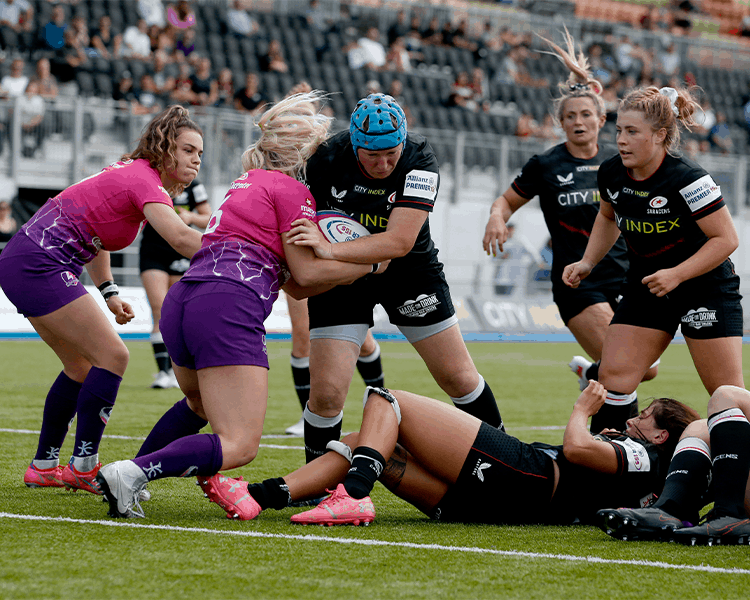 One of the biggest rivalries in English rugby is set for another instalment on Sunday, as Saracens and Exeter Chiefs Women meet at StoneX Stadium for the first time this season.

The two clubs have always been fiercely competitive and it will be no different as Round Five of the Premier 15s sees them meet in North London.

Taking place the day after the Men welcome Newcastle Falcons for their first home match back in the top flight, an action packed weekend of rugby will see both the Men and the Women looking to continue their fantastic starts to the season.

Alex Austerberry’s side are unbeaten at home for approaching three years in a record that they will be looking to preserve as they aim to reclaim the Premier 15s title.

Both teams have started this season strongly with Sarries registering four bonus point wins against Wasps, DMP Durham Sharks, Loughborough Lightning and Worcester Warriors to give them the perfect platform as the next block of league matches commences.

Exeter recovered from an opening day defeat away at Bristol to beat Sale 54-0, and then a highly impressive 24-12 win away at champions Harlequins has confirmed their title aspirations for this year after narrowly missing out on a semi-final spot in the 20/21 campaign.

Last season saw two dramatic matches when the sides met and this year promises to be no different, the Chiefs ran out 22-14 winners at Sandy Park before the Women in Black overturned a half-time deficit to win a thriller 34-21 at StoneX.

It could also be a truly historic occasion as Sonia Green approaches her 300th club appearance for Saracens which could come in this match, starting her 20th season in North London in memorable fashion.

Poppy Cleall, who recently made her 100th league appearance for the club has spoken of the impact that supporters are having now that they have returned to the stadium is vast numbers.

“It’s so good to have supporters back. Their noise really makes the world of difference and it has been incredible to run out at StoneX and see all of them there cheering us on so we’re hugely grateful for the support that we get, week in week out.”

Tickets for what promises to be a brilliant weekend of rugby at StoneX Stadium are still available, click here to secure your seat!