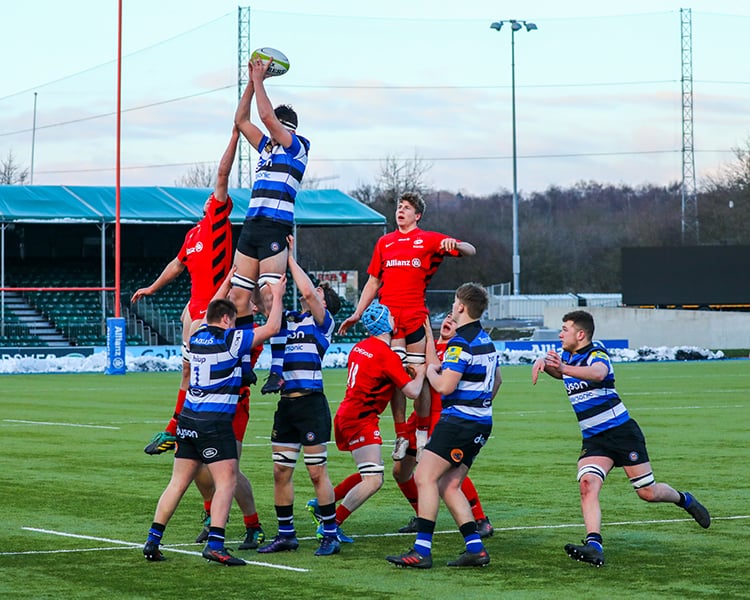 Sarries U18 edged out at Bath

Saracens Under-18s suffered a 26-14 defeat on the road to Bath in their second Academy League outing of the campaign.

Whilst Sarries started well and created some good attacking opportunities, their line-out proved their downfall and resulted in several chances squandered in the opening 10 minutes.

Scrum-half Sam Bryan was the visitors’ bright spark and hindered a lot of Bath’s go-forward with his defensive efforts but the hosts’ persistence, aided by a couple of penalties, saw them go 7-0 ahead and that was extended with a penalty at goal just before half-time.

Bath continued to control the game in the second half and furthered their advantage through two more tee-kicks.

Saracens U18 end the calendar year against London Irish after one win and one defeat in their opening two league games.

It was at that point Saracens eventually put phases of quality together and put pressure on their Somerset opponents. Tom Mills did brilliantly to beat the full-back to dot down in the corner, a finish expertly converted from the touchline by Alex Cahill, and Alex Wardell barged his way over to bring Sarries to within two points with 10 minutes to play.

However, Bath responded impressively and a penalty ticked the scoreboard over before proceedings were settled by the home winger who left two Saracens stranded to dive under the posts.

Academy Manager Mike Hynard said: “We started the game well but weren’t able to convert any of our early territory and pressure into points. Bath were more clinical than us and as soon as they got into our 22 they came away with points.

“Bath were able to build on their lead through our mistakes; lineout errors, dropped balls and penalties. These mistakes meant we never built any momentum and it looked like we just couldn’t generate any positive energy. It wasn’t until midway through the second half that we were able to put any real pressure on Bath in their 22.

“Having scored two quick tries, we were right back in it, but then a bit of ill-discipline cost us an intercept opportunity and the luck of the bounce beat us for their final try. I believe you make your own luck and we will work hard this week to put in a more ‘Saracens-like’ performance against London Irish next Saturday.”