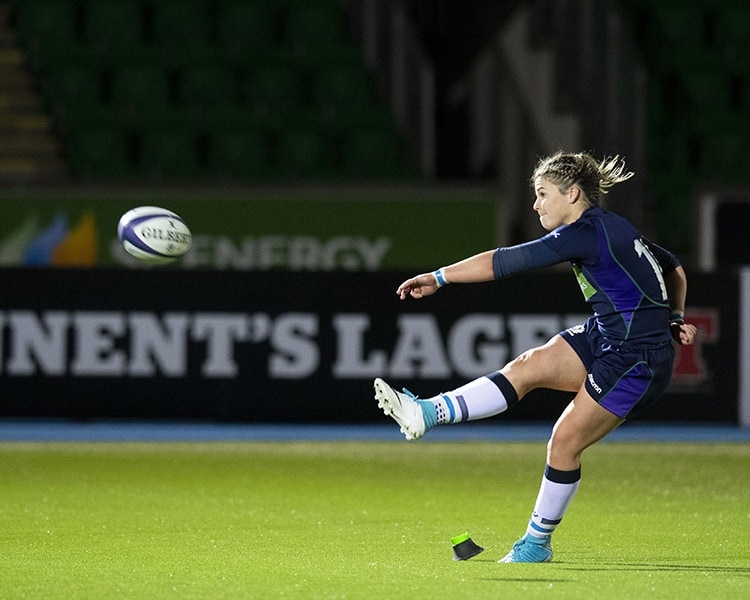 Martin is equally comfortable at fly-half or inside centre and signs from French club Lille Metropole Rugby Club Villeneuvois after spending a season playing in the French Top 8.

The 29-year-old made her Scotland debut off the bench against Ireland at the 2010 Rugby World Cup and made her first start in 2011 against Spain.

She went on to captain her nation for the first time in the 2016 Women’s Six Nations and continued in the role in the following two tournaments.

Martin played a part in the Scotland Women’s best Women’s Six Nations finish in seven years in 2017 and their first away win in twelve year’s versus Ireland at Donnybrook in 2018.

This will be her second stint in the TP15s having previously played for DMP Sharks in the 2017/18 season.

Martin said: “I’m really excited to be joining Saracens Women this season. I’m looking forward to training alongside some world class players and the challenges that will bring with it.

“It’s great to be joining a highly successful club like Saracens. They’re committed to supporting and developing players as much off the field as on it. The club values and ethos really attracted me, to be part of something really special.

“I can’t wait for an opportunity to pull on the new colours.”

Saracens Women Head Coach Alex Austerberry said: “We are delighted to have Lisa confirmed for the season. She is an outstanding player with experience on the international stage.

“Her attacking flare and creativity are exciting to watch and her leadership skills will be a great addition to the squad.

“Lisa has the versatility and talent to play a number of positions and that will allow us to play in different ways and create different pictures.

“Most importantly, Lisa is a driven individual who works hard to maximise her talent. Her approach to the and attitude will certainly drive the Saracens Way.”

Don’t miss your chance to see Saracens Women at Allianz Park this season! Make sure you get your tickets HERE.