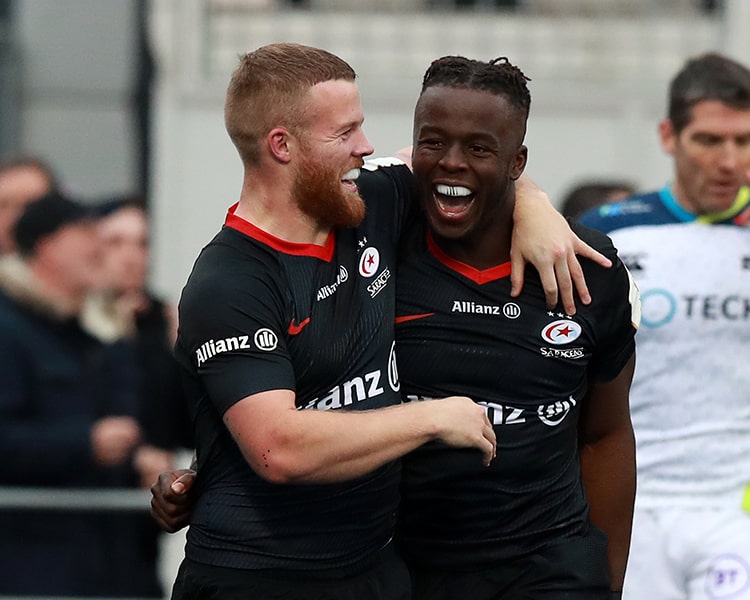 Segun doubles up on day of firsts

In a day of firsts, Saracens Men got off the mark in the Heineken Champions Cup with an emphatic victory over Ospreys at Allianz Park.

Debutant Elliot Daly put in a man-of-the-match display. Tom Whiteley made his maiden European start. Jack Singleton grabbed his first try for his boyhood club. Academy back rower Andy Christie earned his stripes in Europe for the first time.

Segun crossed twice for his first tries in Europe.

One man’s first soon became a second as Rotimi Segun scored a brace of tries in the match.

After a volleyed-pass from Whiteley, the winger sped on to Daly’s pass to dive over in the right corner in the first period and it was a similar tale in the second half as he rounded two visiting bodies to dot down.

In just two Champions Cup appearances, Segun now has two tries and was full of praise for the team coming together to put in a united performance.

He said: “The boys said beforehand we’ve had a great buzz for the past four or five weeks and the guys coming back in wanted to add to the buzz so and they did that.

“After the past few weeks, we tried to show togetherness and fight for each other and that showed. The boys really dug in and we ran away with it.

“It’s my second game in Europe and it’s nice that we all came together and put in a great performance.”