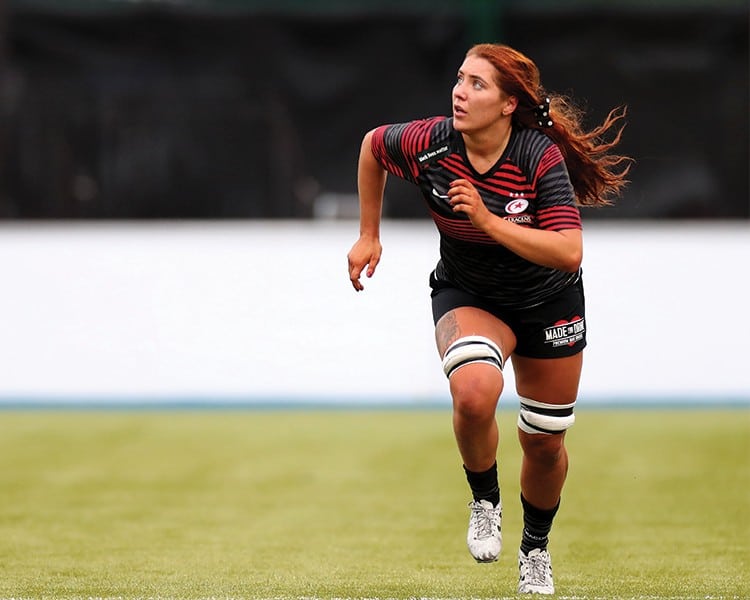 Georgia Evans insists Saturday’s victory over Wasps was the most compelling evidence yet that the squad’s strength in depth will prove vital to their title defence.

Without three internationals who were involved with the Red Roses – not to mention a number who are injured – Sarries ground out a 33-27 win to stay perfect in the Premier 15s.

The likes of Sophie de Geoede, who made her first start and Jeanina Loyola both made a positive impact in the forward pack, while there was some serious chemistry among the backs despite another reshuffle.

““Working with Alex and working with some of the girls has just been fantastic.”

And Wales international Evans, who has proved her versatility in recent weeks also, insists it is inspiring to see others stepping up and making their mark.

She said: “It’s one thing that has really impressed me, and a lot of people, coming over here.

“I think it’s almost psychological for a lot of teams when you’ve got your internationals out, especially when we’ve got such a big pack with Poppy and Marlie being away.

“When they do go, we’ve got people to step up and they do step up. They put their foot down and they say I’m here to make a mark as well.

“All the girls put in a massive shift against Wasps.”

Alex Austerberry’s side now have a week off before their next Premier 15s encounter with Bristol Bears Women although all eyes will be on the Red Roses this weekend at Twickenham.

And Evans insists everyone continues to relish the opportunity to challenge one another to get better every session.

She added: “Being at Saracens there’s just so many things that highlight what everyone needs to work on. I think it’s just the little details now.

“Working with Alex and working with some of the girls has just been fantastic.

“They’ve highlighted some key areas of defence, being on the right side of the whistle and just making sure I get all these little details right to help me in my overall performance.”