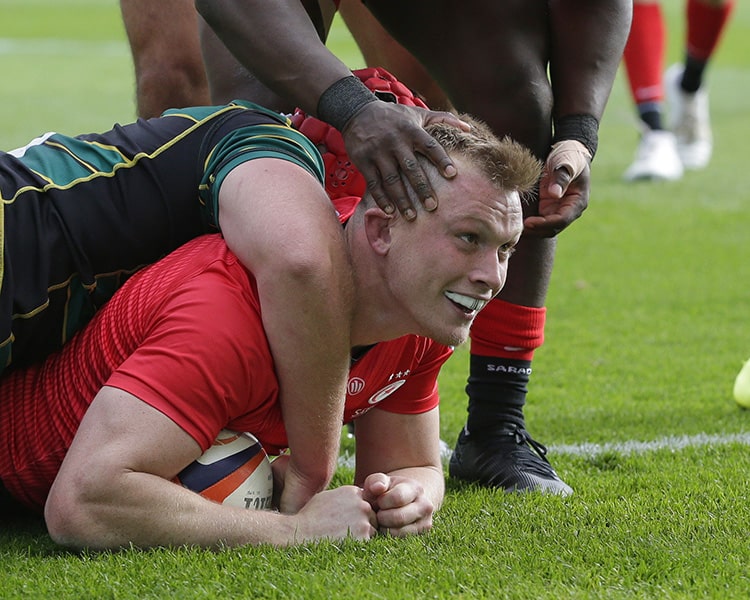 Nick Tompkins was awarded man of the match in Saracens’ win over Northampton Saints and it’s easy to suggest the reason why being his three tries at Franklin’s Gardens.

However, there was more to the centre’s performance than his hat-trick.

The 24-year-old was hard to beat in the Premiership Rugby Cup contest, making 11 tackles and he also managed two turnovers at the ruck.

On the offense, his 12 carries saw him make 110 metres which helped him add his second, third and fourth scores of the tournament so far.

Sarries’ second half at Saints was spirited and determined, and Tompkins praised the club’s youngsters for stepping up and performing as they do in training.

He said: “We knew they were good in attack, we knew they were going to run it as well so for us it was to stop their spacing and stopping their momentum was paramount, then we could get set and get off the line.

“In attack we had remain patient, try and play through them but earn it to go wide and I think the boys stuck to it well.”

Tompkins continued: “It was really pleasing to see our young players do well.

“It’s great to see as they do it week in, week out in training so it’s really nice to see it progress and transfer it on to the pitch.

“Roti works so hard, Manu stepped up and showed so much composure as a 10 which is brilliant and it’s great to have on the pitch.”

Progression to the knockout stages is still possible for Saracens who face Harlequins in the Derby Day match at Allianz Park on Saturday, an encounter Tompkins is relishing.

“It’s going to be brilliant to get back home against Quins and we’re all really looking forward to it.”

Cheer Saracens on against Harlequins at Allianz Park as the Men in Black look to secure progression to the knockout stages of the Premiership Rugby Cup!