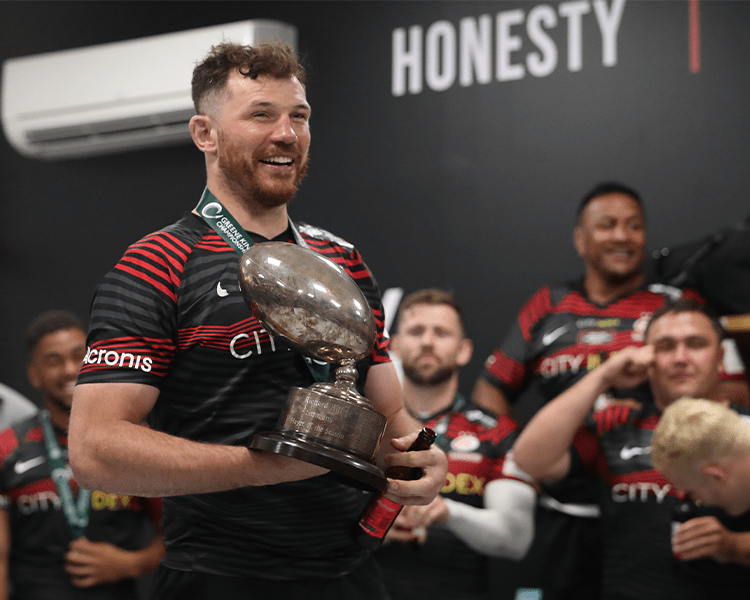 Following the second leg of the Greene King IPA Championship Play-Off Final, the end of season awards were handed out in the changing room.

Swinson, who has played in 10 of the 12 Championship fixtures this year got the ultimate recognition from his team-mates for his tireless performances in the second-row.

The former Scotland international was Man of the Match in the first leg of the play-off final and has been a key part of the set piece which saw Sarries displays constantly improve throughout the campaign.

Reffell made a huge impact in the back-row this season, forming brilliant partnerships with the likes of Andy Christie, Jackson Wray, Billy Vunipola and Mike Rhodes.

At just 22 years of age he put in huge performances in particular in defence and at the breakdown, featuring in eight matches.

Director of Rugby Mark McCall was full of praise for both players.

“Tim typifies all the qualities we value at the club and it is no surprise that his teammates recognised his outstanding contribution. He is a great person to have in the group, sets high standards in the training week and always gives the team 100% in every game. Tim can be very proud of the impact he has made at the club.

“Sean is a young player who has taken full advantage of the playing opportunities that have come his way this season. His diligence and attention to detail in his preparation have been matched by the consistently high level of performances he has produced week in week out. Sean’s best days lie ahead and we are all excited to help him fulfil his potential.”