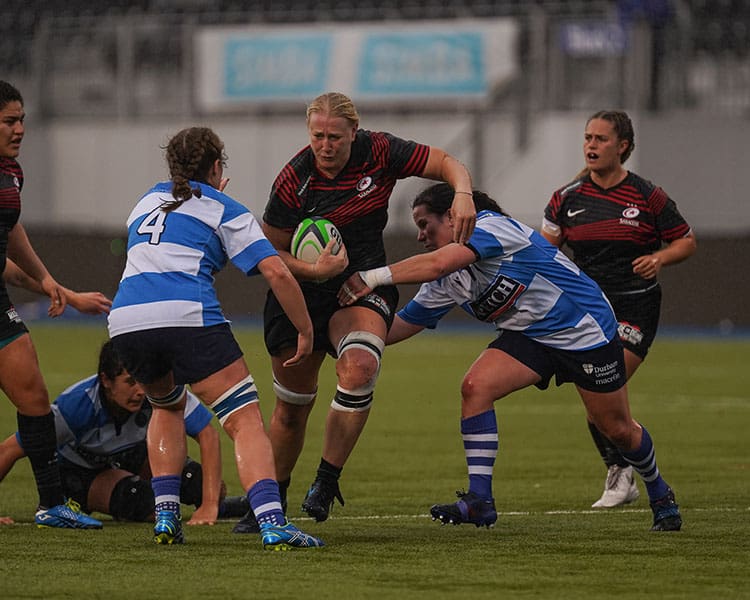 Tamara Taylor felt mixed emotions after scoring twice against her old side DMP Durham Sharks on her first start for Saracens Women.

Sarries asserted their dominance in the first half with former England international Taylor grabbing a quickfire double before Marlie Packer and Poppy Cleall scores secured a bonus point.

The Women in Black weren’t happy with their first-half display and they showed more panache after the break, scoring 50 points in a much-improved second-half performance. Taylor insists the squad need to ‘start quicker’ as they progress throughout the campaign.

“It felt a little bit weird but to be honest I don’t score many tries, so I’ll take anything I’m given!” she said on scoring twice.

“I don’t score many tries, so I’ll take anything I’m given!”

“We need to start quicker. We’ve had a bit of a slow start in the last couple of games and there’s going to be a big emphasis on us making sure we’re on it in the warm-up so we can take it into the first 20 minutes of the game.

“We made mistakes and forced offloads so our half-time chat was focused around settling into the game because if we could minimise our mistakes we’d be able to have more of the ball.”

With a mixture of forwards and backs getting on the scoresheet, the importance of the variety in Saracens’ attacking play was not lost on Taylor.

She said: “We’ve got a really good set of players, forwards and backs.

“We’ve got forwards who can handle and we’ve got backs who are strong enough to look after themselves out wide and in the contact area.

“It’s just one of those teams where we’ve got strength across the match day squad and the wider squad as well.”