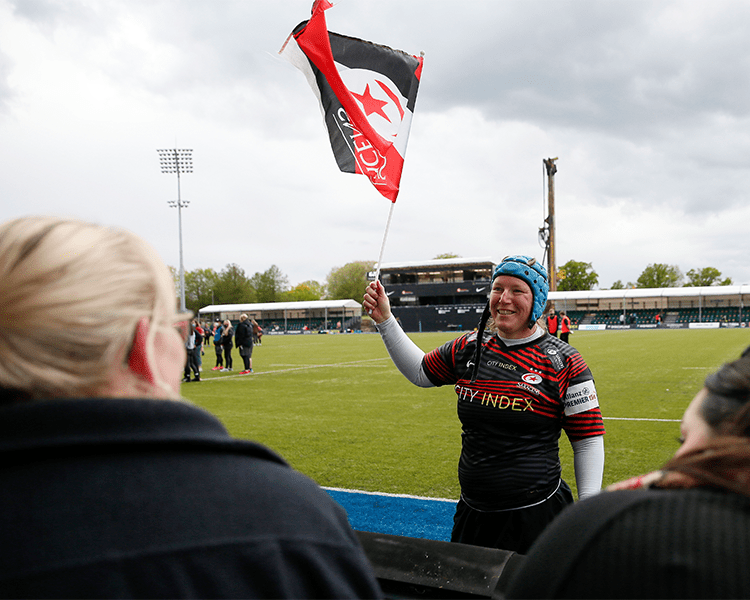 Saracens is delighted to announce that Tamara Taylor and Rocky Clark will continue in their roles as Player/Coaches for the 2021/22 season.

The pair, who have a wealth of experience between them, are two of the most capped players in English rugby history and will be handing on their knowledge to the squad again during the upcoming campaign both on and off the pitch.

Taylor, who helps to coach the forwards as well as playing in the second-row has an incredible 115 caps for England which also includes the World Cup triumph in 2014.

She has made 16 appearances for the Women in Black since arriving, and her comprehensive rugby CV also includes being named the RPA Player of the Year in 2017.

“I’m looking forward to another season with Sarries. We will be working hard on and off

the pitch to get that Premiership trophy back!” Said the 39-year-old.

Clark boasts an incredible statistic as she is the most capped player in English rugby history, putting on the Red Roses shirt 137 times.

She also coaches the forwards whilst featuring as a prop in the front-row on the pitch, having done so 29 times for the North Londoners.

Clark was awarded an MBE in 2015 for her services to rugby, showing how much of an influence she has had on the sport and how much she experience she can pass on to the current squad.

“I’m delighted to re-sign with the Saracens family. It’s a brilliant club to be a part of, with fantastic coaches and world class players to play alongside. I’ve already made some amazing memories in the black and red jersey. Here’s to more memories and Rocky try celebration dances!” Said Clark.